Water warriors from across India shared their experiences in harvesting water at a conference, which aimed to 'Make Water Everybody's Business' 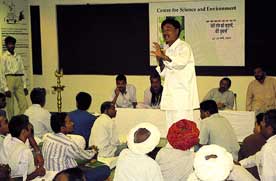 it was an event that sparked hopes. At a two day conference titled Meri gaon ki kahani, meri zubani, (The story of my village in my own words),water harvesters from four states -- Madhya Pradesh, Gujarat, Tamil Nadu and Rajasthan -- gathered in Delhi to share their experiences on water harvesting in their respective areas. Organised by the Centre for Science and Environment (cse), it was also an occasion to release the centre's new book on rainwater harvesting, Making Water Everybody's Business . The book is a dossier of global efforts in water harvesting, ranging from a small hamlet in Rajasthan to cosmopolitan Singapore. It supplements cse's earlier book Dying Wisdom , a comprehensive collection of India's water harvesting traditions that was released in 1997.

Hardly a yard away from the conference venue at Delhi's India Habitat Centre, the Indian Meteorological Department (imd) was holding an international conference on how to predict monsoons on a day-to-day basis, probably harassed by the country's third consecutive drought. In contrast, the 55 water harvesters who gathered for the conference seemed least bothered about the low rainfall. Instead, they were boasting about how much rainwater they had harvested to nullify the impact of the droughts. "Where there is no water there is drought. In my village we have harvested enough water, so there is no drought," said a proud Jakalbehn Dihora, a 60-year-old resident of Mithi Virdi village of Gujarat. In fact, the two drought-affected states, Rajasthan and Gujarat, had the maximum participation in the conference.

A few kilometres away, parliament remained adjourned. While the country's politicians pointed fingers at each other on each other's credibility, in a refreshing environment, leaders of three political parties shared concern over water. The Congress chief minister of Madhya Pradesh, Digvijay Singh, released the book. He shared the dais with Bharatiya Janata Party (bjp) member of parliament from Bhuj, S P Gadhvi, and the health and family welfare minister of Orissa, Debiprasad Mishra, a Biju Janata Dal member. "There is a lacunae in our thinking. There is a need for a social movement for water conservation," emphasised Singh. The minister from Orissa admired Singh's 'dynamism' in water conservation initiatives, while Gadhvi said, "Water is the new religion. Even sadhus are now into water conservation in my parched region." Though he admired the relative consensus among the politicians present on water, cse chairperson Anil Agarwal noted, "There is no landscape in the country which is as drought-stricken as the political landscape of the country... Only a few politicians like Digvijay Singh stand out like an oasis."

The conference was designed as a typical village panchayat meeting where everybody speaks about his/her experience and problems. Different community members shared their experiences with harvesting one of the most precious natural resources of the world. The meeting did not end till the problems were addressed. "It is an opportunity for me to narrate my experiences and also enrich myself with other's experiences. I have found answers to many questions," said S K M Mudaliar from Vengal, Tamil Nadu who narrated his experience with community-based irrigation programmes.

Rajendra Singh of the Alwar-based Tarun Bharat Sangh, who also chaired the conference, said, "It is a conference where we not only share our experiences but also decide on how our experiences in water conservation spreads." As one community after another narrated its experiences, it became clear: water harvesting has finally caught up with India's rural communities. "The water harvesters present here are not isolated examples," said A Vaidyanathan, former member of the Planning Commission adding, "The fire of water harvesting is now spreading."

Despite the pride in churning out economic miracles through water conservation, community members, whom Agarwal addressed as 'water warriors', were a worried lot. "Villages are taking control of their destiny after being neglected by their rulers for years. Now the government puts all hurdles in their way," said Mansukhbhai Suvagia, a submersible pump manufacturer and an enthusiastic 'water warrior' from Rajkot. According to him, the Gujarat agriculture minister has termed him 'unsocial' for exalting small dams and traditional water harvesting structures. Participants from Rajasthan's Alwar district described how the local authority bulldozed the half-constructed building for the Arvari river parliament. They also made a request to Digvijay Singh to convey their regret to his counterpart in the Congress-ruled Rajasthan.

This led to a one-hour long debate on whether these communities should work with the government or go ahead with their own resources for further activities on water conservation. "Government help should be taken because it is meant for us," said Hardevsingh Jadeja, sarpanch of Raj Samadhiyala village of Rajkot. Similarly, Nagendra Yadav, a district panchayat member from Shahdol, Madhya Pradesh, said, "In Madhya Pradesh, people are participating in a government watershed development programme but the planning and implementation is strictly with the community." Intervening in the debate, Rajendra Singh said, "We can always take government help, but the power of implementation must always be ours. The money can be from the government. But the mind to use the money must be ours."

Back at the book release function, the role of the government in water conservation was also debated and it was unanimously agreed that decentralisation is the only way to manage the water crisis in the country. "Decentralisation in water conservation is the cheapest way to prosperity," said Digvijay Singh. "Earlier there was no poverty line or poverty index. It is a new phenomenon so there must be some lacunae in the existing form of governance," he said. Jadeja said that his village with water harvesting and watershed development has increased its annual income from Rs 1.5 crore in 1978 to about Rs 4.5 crore. "Give us five years of good rain even our labourers will go to work in Maruti car," he boasted. "If you decentralise water, there will be technological innovations by the people leading to more harvesting of water," said Agarwal, citing the example of artificial glaciers developed in the remote region of Ladakh.

Agarwal's call for a 'geometric' progression in the number of water harvesters in India -- leading to one water harvester each from India's half-a-million villages -- got wide support. Pledging support, Mishra said, "Within a year in Orissa we will have 100,000 water harvesters." All the participants pledged to support Agarwal's call. To achieve this dream and to carry forward the water conservation activities, participants decided for a very informal but cohesive group called Jal Biradiri (Water community) to be headed by Rajendra Singh.