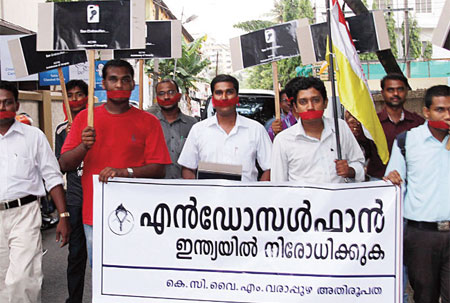 A bill to be tabled in Parliament is set to re-ignite an old tussle between the Centre and states. The Pesticides Management Bill of 2008, which will be heard in the Monsoon Session, aims to replace grand old Insecticides Act of 1968. It will regulate a wider range of chemicals, including weedicides and fungicides along with insecticides.

States like Kerala have been demanding that management of pesticides should be a state subject. In November last year, the then state agriculture minister M Retnakaran wrote to Union agriculture minister Sharad Pawar to this effect. “Since states are held accountable for problems arising out of misuse of pesticides they must be given the power to take punitive action and award compensation in case of violation of the Act,” noted Retnakaran’s letter. It further said states should be given the power to decide on which pesticides to manufacture, use, sell and ban. Kerala government is currently fighting a case in the high court filed by cardamom planters after it permanently banned two categories of pesticides—extremely poisonous and highly poisonous.

The bill continues to authorise the Centre to decide whether or not to ban a pesticide permanently. The only relief it offers to states is to extend the temporary ban for 180 days instead of 60 days as under the Insecticides Act.

Kisan Morcha, a farmer's organisation backed by the opposition Bharatiya Janata Party (BJP) is not happy with the bill draft. Its national general secretary Naresh Sirohi says by not delegating the control of pesticides to states, the Centre is encroaching on their authority to enact agriculture-related laws. Without the authority states would not be able to manage pesticides as per their requirement. The BJP is determined to oppose the bill.

Opponents think pesticide regulations may get chaotic if states are given control. All states may not be on the board at the same time to ban a pesticide.

However, there are more problems in the bill than meets the eye (see 'Bill not up to mark'). The bill does not call for regular review of pesticides. All it says is that the review will depend on the advice of the Central Pesticides Board (CPB) to the Centre. Once the bill is enacted, CPB will replace the existing Central Insecticides Board.

It has the provision for speedy registration of pesticides in case of “national emergency”, “urgency” or “public interest”, but does not define the terms.

There are regulatory issues as well. For instance, the bill says no pesticide can be registered unless the tolerance limit is fixed. Tolerance limits for pesticides are specified in the Prevention of Food Adulteration Act of 1954, which is yet to be completely replaced by the Food Safety and Standards Act of 2008. Its relevant provisions are not operational.

Umendra Dutt of Kheti Virasat Mission, a non-profit promoting sustainable farming in Punjab, points out that the bill does not adequately penalise companies who spread misinformation or whose products harm crops and human health. It mentions a penalty of Rs 25,000-Rs 100,000, and in the worst case up to Rs 500,000, which is peanuts. It should have provision for cancelling licences of defaulters. States should have the power to settle compensation in 30 days of receiving complaints, says Dutt who has recently sent a petition to the agriculture ministry in this regard.
Special Report Special Report Weedicide Prevention of Food … Prevention of Food … Prevention of Food … Pesticides And Toxins Pesticides And Toxins Pesticides And Toxins Pesticide Regulation Pesticide Industry Pesticide Industry Pesticide Industry Parliament Legislation Kerala Insecticides Act 1968 Insecticides Act 1968 High Court Health Effects Health Effects Health Effects Government Of India (GOI) Fungicide Compensation Compensation
SUPPORT US