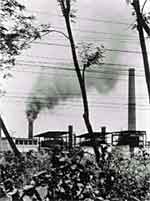 long before the world started talking about the dangers of climate change and abatement of carbon dioxide (co2 ) and methane emissions, Kautilya, an ancient Indian philosopher, almost 1850 years ago, had realised the importance of afforestation and proclaimed (in his book Arthashastra ) measures and methods of preserving forests for the human good. He had thought of productive and non-productive forests separately. His non-productive forests included purposes like 'reserved for ascetics, recreation and as wildlife sanctua-ries and clean air'. Most people would know about the use of forest resources for food and non-food consumption, durable and energy uses, and recreation. But how many of us after Kautilya think of it as a major source of mitigating carbon emissions?

Ever since the Rio conference in 1992, scientists and environmentalists are searching for methods of capping greenhouse gas ( ghg ) emissions on a global scale. Broadly speaking, three different approaches are currently talked about:
• Each country unilaterally opting for reduction of energy productions known as the emission cap approach;
• Countries imposing a carbon tax on firms for exceeding the emission levels known as the fiscal or carbon tax approach;
• Joint implementation in which developing countries transferring part of carbon tax actually collected or collectable, to developing countries for:

• creating a carbon sink through forestry in countries with high carbon emissions, with or without transfer of resources from the North.

According to a study by the Tata Energy Research Institute, New Delhi, cost of co 2 reduction through efficiency improvements in energy utilisation in India is about us $45.38 per tonne of carbon on average, whereas it is us $67 under renewable energy technologies and us $27.3 under reforestation options. Similar studies carried out in several countries indicate that carbon sequestration is the most cost effective carbon mitigation technology. Vis--vis present day state of technological options, except for co 2 scrubbing, which is not a proven technology at this stage, reforestation is the only known post-combustion carbon abatement measure.

Several questions are raised on the carbon sequestration approach. The first one is regarding availability of sufficient land. In a study, scientists like R K Dixon, P E Schroeder, and J K Winjum from the East-West Centre for Environmental Economics at the University of Hawaii, have tried to match the availability and feasibility of global level reforestation and restoration of degraded forest lands at the rate of 20 million ha (mha) per year and another 15 mha per year through programmes of agro-forestry and reducing forest losses. According to them, in this process, about seven billion tonnes (t) of carbon would be sequestered additionally by the year 2030 and 19 billion t by 2050. Even for a country such as usa and Canada, the average cost of carbon sequestration through forestry is just about us $5-6 per t of carbon, or only us $0.5 for Nepal. Discussions during the Inter-governmental Panel on Climate Change meetings are putting potential carbon sequestration through forestry at the global level, taking land availability and capability together, to be in the range of 60 to 80 billion t per year. All these estimates clearly should put aside the fear of land scarcity out of our minds.

The second major question normally raised is about the time period required for sequestration through afforestation option. It is quite understandable that it requires at least 15-20 years for attaining maturity and to complete one complete cycle or rotation of tree growth to maturity. But the continuation of the photosynthesis process and the associated value additions and its equitable distri- bution and employment through forestry are no less a benefit to ignore.


According to N H Ravindranath and Madhav Gadgil from the Indian Institute of Science, Bangalore, the standing biomass (above and below ground) in India is estimated to be 8,357 mt (million tonnes) for the year 1986, of which the carbon storage would be 4,178 mt. The total carbon stored in forests including soil is estimated to be 9,578 mt. On the other hand, carbon emissions from fossil-based energy production and consumption activities in India have been estimated at 152-205 mt per year. Clearly, there are wide differences in the estimates of these emissions made by diffe rent scientists and ecologists. The corres ponding estimate from agricultural activities including fuelwood burning ranges from 43 mt to as high as 115 mt.

Ravindranath basing himself on a detailed forest eco-system analysis and estimation of biomass after taking into account cropping patterns and livestock growth, arrives at an estimate of 64 mt of carbon emission per year, against which the present rate of uptake of carbon from forest regeneration is in the range of 69 mt per year. In other words, the current rate of carbon emission from agricultural and forestry sectors is just about being balanced by the current rate of reforestation. This still leaves the entire fossil-based emission unabated. The question is does India have any additional potential to sequester more carbon through forestry? If so, at what cost?

India has nearly 53 mha of degraded lands. These degraded lands together with wastelands within forest areas are potential candidates for additional carbon abatement through forestry options. According to a study by the Delhi-based Institute of Economic Growth, at least 39 mha of the degraded lands mentioned above are clearly feasible for carbon sequestration. These estimates are based on both their land capabilities, feasible forestry options and demand patterns for different types of forest products. Of these, about six mha of pasture lands can be brought under community forestry , about nine mha of cultivable wastelands under short timber plantations , six mha of miscellaneous tree crop and other than current fallow lands for long timber plantations , and finally 12 mha of partially degraded areas for natural regeneration and six mha of fully degraded forests for enhanced regeneration . Such a mix of forestry options with land capability can enhance the sequestration potential by 78 mt of additional carbon per year by the year 2020. Furthermore, it is important to note that due to additional supply of woody biomass, the current rate of deforestation would also come down, thereby conserving another 69 mt of carbon per year. In this process, anywhere between 78 to 147 mt of carbon would be sequestered additionally as against 150-200 mt of carbon emission from the fossil energy sectors.

The estimated investment cost for a six year plantation programme under various forestry programmes is Rs 40,500 crore or about Rs 10,350 per ha. Much of it would be under plantation and protection forestry, whereas it would be as low as Rs 2,300 per ha under natural regeneration.


Forestry accounts for 1.84 per cent of the Gross National Product in India. It generates about 36 million person years of employment annually. India imports Rs 15 billion worth of forest-based materials annually. Implementation of forestry options can lead to a number of ecological, economic benefits and institutional changes.

The notable ones are: enhancement of carbon stock from 9,578 mt to 17,094 mt and a net annual carbon sequestration from 73 to 149 mt after accounting for all emissions; a trebling of the output of forestry sector from Rs 49 billion to Rs 146 billion annually; an increase in the Gross Domestic Product contribution of forestry from Rs 32 billion to Rs 105 billion over a period of 35 years; an increase in annual employment level by 23 million person years; emergence of forestry as a net contributor of foreign exchange through trading of long timber forestry products to a tune of Rs 15 billion; and an increase in economic value of forest capital stock by Rs 7,260 billion with a cost-benefit analysis showing forestry as a profitable option. The basic needs of the majority of India today is not food but fuel and water. Through the proposed forestry options, the fuelwood needs to a tune of 250 mt per year can be met, thereby saving over 75 million rupees on fossil oils.


One of the largest afforestation programme currently in operation is joint forest management ( jfm) . The essence of jfm is joint participation of local community and forest department in the management of forests. West Bengal was the first to pass an official policy resolution on jfm and now a number of states have followed suit. Under jfm, each village will constitute a forest protection or management committee and will protect and manage degraded lands to promote natural regeneration or vegetation. Though significant empowerment features are built in, jfm does not go far to grant adequate powers and rights to local communities. Other notable programmes are the watershed and wastelands development programmes through which degraded commons, private lands and forest areas are to be brought back to vegetation with community involvement.

In all these programmes mentioned above, the main issue that remains to be resolved seems to be setting distribution rules agreed between the village communities and state agencies. A classic example of the failure of implementing such a just distribution system is the famous 'Sukhomajri' experiment, wherein the villagers who protected the forests in lower Shiwaliks have not received any share in the protected forest products. If India is serious about implementing carbon sequestration, a mix of programmes embodying distributive rights and justice as per the mix of forestry options mentioned earlier will be necessary.

Apart from such programmes some of the additional policy interventions required are: ban on import of woods, ban on commercial felling of trees, allowing community rights, and some fiscal incentives for short and long timber forestry. The forestry options are as transparent as the market orientation of production systems. If agriculture cannot come under the purview of reforms process, at least forestry can be, thus saving India from the curse of climate change.