No one is debating where goats will graze 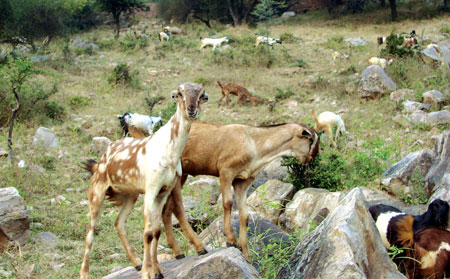 Goats give good returns only as long as fodder is free. Unlike cattle that are fed crop and crop residue, goats and sheep graze in wasteland, common grazing land and forests. In western Rajasthan, where degrading farm land and feed shortage forced people to abandon farming and cattle and turn to goats, pressure on grazing areas is showing.

Kankwari village in the core area of Sariska National Park is being shifted outside the park. Its remaining 55 families, with two-three goats each, graze goats on a hill inside the park, though grazing is not allowed in the core area. “We can survive only if our goats are allowed to graze on the dungar (hill),” said Kajod Singh, 70. Summers are especially tough. Mahavir Kumar of Baletha village in Alwar, who owns 50 sheep and eight goats, had to spend Rs 500 a tree a day to feed his livestock in summers. “Even vilayati babul (Prosopis juliflora) was rented out at Rs 500,” he said. Not all can spend on feeding goats. “I’d rather sell the goats in summer than spend Rs 8,000-10,000 (on 25 goats) to feed them,” said Sohan, a farmer in Gopalpura village in Alwar. This is what will happen to the goat economy if grazing land is not ensured.

With just 7.87 per cent of its area as forest and 4.98 per cent as permanent pastures and other grazing land, Rajasthan is especially vulnerable.

Change in cropping pattern is also shrinking grazing space. In the dry season a large number of herds of goats and sheep migrate from western Rajasthan to northern and eastern parts of the state, Madhya Pradesh and Uttar Pradesh. Earlier, farmers in villages on the way would ask herders to spend nights in their farms so that droppings of sheep and goats provide manure, said S K Shrivastava, chief conservator of forests, Rajasthan. Now people grow two-three crops a year, so most of the times the fields are cropped and farmers do not allow herders. “Herders often request us to let them stay in the forest,” he said.

Demand on forests will only rise with Rajasthan setting aside large chunks of community wastelands for biodiesel plantation. The Rajasthan Land Revenue 2007 Rules allow 1,000- 5,000 hectares (ha) of village common land to be transferred for 20 years from communities to the biofuel industry. Jatropha plantation in Ram pura, Unti and Manpura villages of Jaipur district have affected fodder availability, found a survey done in 2007-08 by non-profit Centre for Community Economic Development Consultants Society that works in Rajasthan.

They turn to forests

Threats to goat rearing are similar across India. Between 1960-61 and 2003- 04, land allotted for permanent pastures and forest grazing land decreased by a fourth, from 13.97 million ha to 10.44 million ha. In the same period the goat population more than doubled. In the next 10 years it will almost double again. “Since the grazing land is diminishing, the pressure is definitely going to be on the forest,” said Sunandan Tiwari who worked with non-profit Winrock International India that has recently prepared a proposal for the Centre to develop a national grazing policy.

Winrock International estimates 272 million livestock graze in forest land and 78 per cent forest area in India is subject to grazing. According to BAIF Development Research Foundation, a public charitable trust, forest areas are overgrazed, with 100 million cow units (grazing equivalent of an adult cow) grazing in forests against a capacity of 31 million in 2004-05.

Forest officials already see goats as a threat. “There is a saying in Rajasthan that Oont chhode aankda, bakri chhode kankda (the camel eats every plant except aankda, a thorny shrub common in the desert, but the goat eats every- thing except stones),” said S K Shrivastava, chief conservator of forests, Rajasthan. “Whatever little regeneration of the forest happens in the monsoon, it is eaten up by the goats and sheep.”

A community of herders, Raikas have been protesting against the forest department across the state for grazing rights inside forests. Residents of Mandalvas village in Sariska’s buffer zone complain forest officials often lock the goat and the herder and fine Rs 50 per goat. “Troubled by this, villagers have sold goats,” said sarpanch Phool Singh Meena. “Till five years ago our village had thousands of goats; now it has 200- 300. Grazing is the biggest problem.”

Foresters think the damage done by goats to the forest is the maximum among all the livestock due to their grazing habits. “An area where goats graze is not likely to regenerate because they eat the rootstock of the grass. Being small, they can reach places other cattle cannot,” said P B Gangopadhyay, additional director general of forests. Behavioural studies conducted at the Central Institute of Research on Goats, however, show goats defoliate smallest branches of trees without damaging the twigs, said the institute’s director Devendra Swaroop. 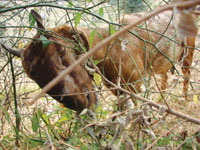 This brings one back to a 25-year-old debate: are goats good or bad for the environment? (See ‘The goat debate’) In 1986 the rural development department had stopped distribution of sheep and goats under the Integrated Rural Development Programme in ecologically fragile areas. It feared goats might encourage deforestation. Civil society came out in support of goats. In December that year a task force was set up to study the impact of sheep and goat on ecology. “A comparative study of sheep and goat rearing and of cattle in ecologically fragile zones indicates that, within the desired grazing pressure, sheep and goats are more economical and less harmful than large ruminants,” concluded the task force in 1987.

All these years, no one defined “desired grazing pressure”. It is the first step to sustained grazing.