As China, the world's biggest cotton buyer, restricts imports, the US aggressively competes with India for global market. Can India stay in the race and rescue its struggling cotton industry? 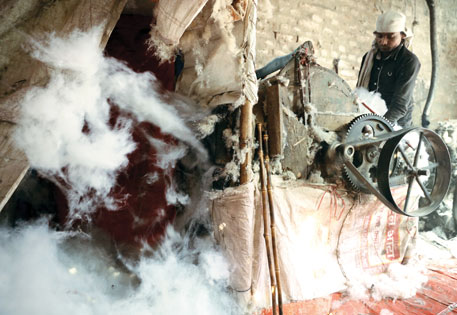 The cotton market in India is in a flux. The country is set to become the world’s largest producer of cotton in 2014-15. India’s cotton production was estimated to touch 6.8 million tonnes between September and December 2014, says a press release of the Cotton Advisory Board (CAB) under the textiles ministry. But there is uncertainty about the bumper stock. With global stockpiles of cotton rising and prices falling in both the domestic and international markets, exports are likely to plummet. The fears are confirmed by China—the biggest importer of cotton from India and the US.

China has been cutting back on cotton imports since September last year. In 2013-14, the country allowed imports of 1.5-1.7 million tonnes. This year, it will reduce this to about 0.9 million tonnes. Such a measure is aimed at offloading its stockpile to an optimum level and boosting domestic demand in the long run. The Chinese government will also provide direct subsidies to cotton producers, announed an official of the National Development and Reform Commission in China in September 2014.

Struggling to find a market

China’s drastic measure is likely to impact the cotton markets both in the US and India, but the latter will struggle a lot more to compensate for the loss. This is evident from the latest report of the United States Department of Agriculture (USDA).

This is despite the fact that India produced almost double the amount of cotton than the US during 2013-14, claims USDA.

This has raised concerns in India about finding new markets for its cotton produce. Sidhartha Rajagopal, executive director of the autonomous Cotton Textile and Export Promotion Council, reassures that measures have been thought of to deal with this volatility. “We are looking at other emerging markets like Vietnam, Bangladesh and Myanmar to make up for the deficit. While cotton might have taken a hit, export of value-added products like yarn and fabrics will see a rise,” he says.

However, it is unlikely that new markets will be able to make up for the deficit created by China’s lack of demand.

P T Pillevar, chief general manager of the Cotton Corporation of India (CCI), responsible for price support operations of cotton under the Ministry of Textiles, says, “We already procured 0.3 million tonnes of cotton from farmers between October and December 2014 at a minimum support price (MSP) of Rs 4,050 for the long, staple variety.” This is just the beginning. USDA estimates suggest that this year CCI might procure close to 0.8 million tonnes of cotton to support farmers in Telangana, Andhra Pradesh and Maharashtra, where market prices are below MSP. The fact that CCI hasstepped in to purchase cotton from farmers shows that cotton producers are already going into losses in the open market.

Kavitha Kuruganti, convenor of Association for Sustainable and Holistic Agriculture, says, “My conversations with farmers indicate that MSP for cotton will be Rs 500-1,000 less than last year. It was predictable that this situation would arise because China had been stockpiling. But we made no provisions to safeguard our farmers. The ultimate burden of this market fluctuation will be borne by the small farmers.” Under such circumstances, the push to increase cotton production in the country makes little sense. Kuruganti adds that the government must stop making decisions solely in favour of industry without protecting the producers.

While farmers are bearing the brunt of falling prices, the fate of textile mills and affiliated industries does not look promising either. “We had been exporting a large portion of our cotton produce to China, but since it is not buying, there will be a surplus and prices are bound to fall,” says R K Dalmiya, president of Century Textiles, a cotton mill in Gujarat.

Textile owners do not prefer buying cotton from CCI as they cannot be sure of quality at CCI auctions. “Contamination with coloured threads or materials like polypropylene is already a major concern,” Dalmiya adds.

Another problem is the plummeting cost of artificial fibres like polyester due to the fall in global petroleum prices. “Cotton is not the only thing we should look at. We are trying to promote and market more blended fabrics and polyester-cotton mix exports. This will ease the pressure on the textile industry,” Rajagopal says (see ‘Pure cotton v cotton blends’).

The US, however, is manipulating India to opt for pure cotton, not blends. An ad campaign by the Cotton Council International urges consumers to “check the label” on apparel to ensure they buy 100 per cent cotton. The ad tells Indians to go back to the basics, because “we have been spinning, weaving and dying it since ancient times”.

What is hidden is that the Council is the export promotion arm of the National Cotton Council of America “dedicated to increasing US exports of cotton, cottonseed and their products”. An expert on textiles, who does not wish to be named, reveals this is part of the US’ strategy to ensure that cotton produced in India is consumed here itself, leaving other markets to the US. Cotton Council International did not respond to repeated queries from Down To Earth about its campaign.

The Indian government has been aggressively pushing cotton production in the past two decades. Given the current vagaries of the market, it is time to re-think this strategy, focusing instead on protecting farmers and reducing the acreage under cotton to more sustainable and remunerative farming. India must ensure that it is not given the short end of the stick in the international market.