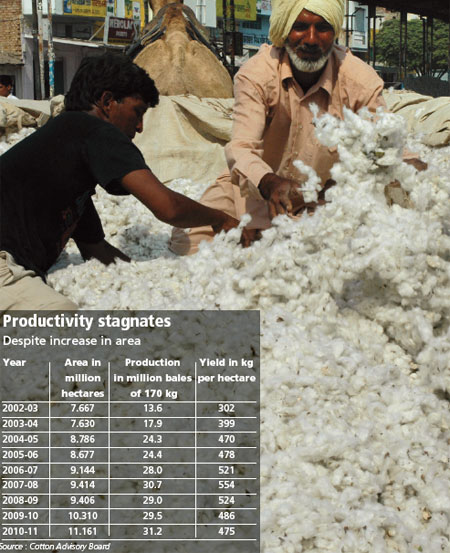 Cotton has been the biggest success story in Indian agriculture since the Green Revolution. In a country struggling with stagnant yields in most crops, cotton has been the one bright spot. Production has soared from 13.6 million bales (each bale is 170 kg) in 2002-03 to 31.2 million bales in 2010-11—a figure that catapulted India into the big league, enabling it to account for as much as 23 per cent of global production last year. Poor quality cotton with high trash content has given way to the kind of lint that the world is ready to pay good money for, allowing the country to export between 600,000 tonnes and 1.5 million tonnes of raw cotton each year after 2005.

How did all this happen? The popular narrative is that the introduction of Bt cotton brought about this remarkable transformation. The genetically modified Bt cotton contains Cry genes from the soil bacterium Bacillus thuringiensis (hence Bt) that is highly toxic to bollworm caterpillars, identified as the main cotton pest. The Bt technology, first developed by Monsanto Company in 1986, came to India in 2002 when the American seed giant entered into an agreement with its Indian partner, Maharashtra Hybrid Seed Company or Mahyco. The joint enterprise they set up to purvey this technology enjoyed rapid fire success with Indian seed companies jostling for Bt technology despite steep upfront charges and royalty fees. The result: the commercial release of several hundred Bt hybrids containing the same Cry genes that was approved by the then regulator, the Genetic Engineering Approval Committee (GEAC). Most of these were snapped up by farmers keen to try out the new technology.

Within four years of its introduction, Bt cotton reduced insecticide use to half the previous level. And for farmers the returns were extraordinary. Some researchers estimate the net average gains from Bt cotton to be in the range of $76 (Rs 3,370 at current conversion rate) to $250 (Rs 11,086) per hectare.

One statistic in this triumphal march, however, has not kept pace: yields. While yields did go up from an average 302 kg per hectare in 2002-03 to 554 kg in 2007-08 (see table above), productivity has been stagnant for the past five years, according to the chief of the Central Institute for Cotton Research (CICR), Keshav Kranthi. CICR is the country’s leading research institution for cotton and has been trying to develop its own transgenic varieties. “The main worry is the stagnation in productivity at an average of 500 kg lint per hectare for the past five years. The gains have been unaffected by the sharp increase in area of Bt cotton from 5.6 per cent in 2004 to 90 per cent in 2010,” he warns.

The yield was 463 kg per hectare when the Bt cotton area was 5.6 per cent in 2004 and reached a mere 506 kg per hectare when the area under Bt cotton increased to 9.4 million hectares, that is 85 per cent of the total 11.1 million hectares currently under cotton cultivation. More worrying, says Kranthi, is the increasing problems of sap-sucking insects, such as leaf hoppers, aphids, whiteflies and thrips, on the vast majority of susceptible Bt hybrids. New pathogens, such as ‘leaf streak virus’, have started affecting the new Bt hybrids. Insect populations of mealybugs, gall midges, mosquito bugs and safflower caterpillars, which were hitherto unknown, have also emerged as concerns.

One reason for this, according to the cotton scientist, could be the huge number of Bt hybrids—estimated to be over 780—that has flooded the market. As a result farmers are not able to choose the Bt hybrids most suitable for their soils and farming conditions. Recommendations on a proven package of practices and the suitability of hybrids for specific agro-ecological sub-zones would have greatly helped push up productivity. Instead, lack of stewardship has resulted in progressive problems and stagnation of production and productivity.

But Kranthi makes it clear that these are issues related to the stewardship and have nothing to do with Bt technology which he believes is good. But he worries about the issues that have become a major concern with farmers. Prime among them is the steady increase in insecticide use. Farmers now pay as much as they did in 2002 for management of the new pests (see table).

Kranthi’s findings are important because they warn of a looming crisis. However, seed firms do not appear to be unduly concerned. K K Narayanan, managing director, Metahelix Life Sciences, says, “These pests are not new to cotton. They were always there, but were considered minor. Now, when there is an effective solution to take care of the major pest (bollworm), the other ones become relatively more prominent.” Metahelix, Nath Bio-Genes and JK Agri Genetics are the other technology developers whose hybrids are also competing in the market against Monsanto’s. Narayanan also dismisses Kranthi’s contention that there has been indiscriminate release of Bt hybrids. “I do not agree with these ‘experts’. The farmers of this country are wise enough to choose the best hybrids that produce more and give higher incomes. It does not matter how many hybrids are released.”

Monsanto, too, is unfazed. It points out, “India has a stringent system in which new hybrids are rigorously tested and evaluated by state governments for performance under different agro-climatic regions.” As for the new pests, a spokesperson says, “The intensity of any pest attack is a combination of weather, growth of weeds and other environmental conditions. Farmers need to manage other factors responsible for production as they start becoming economically relevant.”

When Monsanto says “Indian farmers are the world’s fastest adopters of Bt cotton technology” it actually highlights the problem. US anthropologist Glenn Stone, who has been studying the questions surrounding the use of Bt technology in India for over a decade, finds that “farmers are on a seed and pesticide treadmill, and this is right at the heart of the problem.” Both technologies have some inherent unreliability and both change quickly in India, and the problems in each technology exacerbate the problems in the other, he points out.