Kheechan village on the edge of the Thar desert lies on the migration route of demoiselle cranes travelling from their breeding grounds in Eurasia to bask in India's milder winter. In late September, the first flocks take to the skies from the plateaus, steppes and wetlands of Mongolia and the Caucasus region. They cover the 5,000-kilometre journey in about two weeks, flying across many international frontiers and soaring over the Himalaya. By November thousands of birds land and for five months Kheechan becomes a 'crane village'... 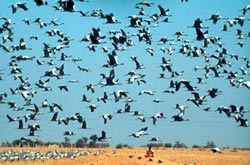 Kheechan village on the edge of the Thar desert lies on the migration route of demoiselle cranes travelling from their breeding grounds in Eurasia to bask in India's milder winter. In late September, the first flocks take to the skies from the plateaus, steppes and wetlands of Mongolia and the Caucasus region. They cover the 5,000-kilometre journey in about two weeks, flying across many international frontiers and soaring over the Himalaya. By November thousands of birds land and for five months Kheechan becomes a 'crane village'. The people protect and feed their guests.

Village elder Ratanlal Jain says, "Some of our songs and legends are about the kuraj, and families even name their children kuraj. In earlier times hundreds of birds came each season and were fed by a few families. But after we started feeding the birds in an organised but natural manner, their numbers are increasing fast."

As a boy, Ratanlal had helped to feed the cranes. Then he left to study and work in Mumbai. But about 20 years ago, he suffered a serious accident and had to return home. He remembered his old ties with the kuraj and decided to devote his time to their welfare.

Soon, Ratanlal got others interested in the idea and received donations from friends in Mumbai. They arranged a separate feeding area. It worked and the crane numbers have steadily risen since then. In 1990, the figure was about 2,000. Last year over 8,000 kuraj spent the winter in Kheechan.

Ratanlal is still the moving spirit behind the project. "Now," he says "we put out about 500 kilograms of millet, sorghum and barley every day. The cost also keeps rising. Now that our work is better known we get regular donations. Many visitors are happy to contribute to the feeding of the birds. But the money is not enough. So every summer, after the cranes have gone, I travel to Mumbai and other cities to collect donations."

Enthusiastic schoolboys spread out the foodgrains. Fourteen-year-old Mohan is proud of his responsibility. "Only the best boys are selected for the work as it is a big responsibility. Thousands of these beautiful birds depend on us for their breakfast and dinner. If we are late or careless, they could starve," Mohan informs.

The demoiselle crane (Anthropoides virgo) is the smallest of the 15 crane species. An adult is about 80 centimetres tall and has a wingspan of over one metre. The crane's blue-grey plumage contrasts with its black legs, black neck and black head. The beak is dark gray at the base, changing to an orange shade at the tip. And no one can miss the shining, scarlet eyes. The adults display two silky white tufts, rising behind the eyes and falling onto the back of the neck. Long black feathers grow below the adult crane's neck and drape down to its breast -- resembling a black necktie.

The cranes are much at home in Kheechan. They spend the day near houses and around ponds. But sentinel birds are always on watch and any unfamiliar sight or sound triggers alarm.

For bird scientists it is a rare chance to study migratory cranes in such huge numbers and from so close. For visitors, a day spent in Kheechan is a very rewarding experience. They get to witness a spectacle of nature that changes from hour to hour.

The cranes begin their day much before dawn. Flying in from the various places where they roosted at night, they land in the feeding area. The grains are already spread out on the ground for them and they quickly start pecking.

The feeding is over by dawn and the birds then fly to the huge sand dunes near the village. As the sun rises, it reveals a breathtaking scene. The blue-gray birds with their black breast feathers stand sharply outlined against the deep blue sky and golden sand.

Many birds use this time to preen themselves. Using their beaks, they clean their feathers and arrange them neatly. After an hour's sunbath the birds take off in different directions in small flocks. Each family group is led by a female, with the younger birds in the middle and the male at the rear. Most go to the empty land on the other side of the village where they feed on seeds of desert plants and also pick up tiny accretions of gypsum. Others fly away to forage in distant fields.

By noon it gets warm and the cranes gather in the shade of trees and around the three village ponds. They drink water and some birds wade into the ponds. But mainly it is a time for relaxation and communication among the family groups. Around 3:30 pm, as if aroused by an internal clock, the cranes go krok-krok and soon the whole colony is in the air, flapping wings and continuing their calls as they head for the feeding area. There, Ratanlal has already opened the food rooms and the boys are busy flinging heaps of grain across the feeding area.

Caution and suspicion of anything unusual are the basic survival instincts of all wild creatures. So the crane flocks circle and hover over the village, at times for half an hour or more, until they feel sure that it is safe to land. Several times you may see a flock fly very low over the feeding ground and then zoom back into the sky. "If the birds notice anything unfamiliar," explains a villager, "such as a car parked nearby, too many people near the feeding area, or if there is shouting or loud music, the birds become suspicious and fly off."

But normally, after a few such swoops, some birds decide that it is safe to come down. "Let just one kuraj touch the ground," says Mohan, "and all will soon follow." Mohan is of course always right in such matters. During his four years of service, he has been witness to over 600 landings.

Soon after the first birds land, the mass descent begins. Many cranes seem to just drop down from the sky. Since the feeding area is very small, it is difficult for them to glide down to a landing. So they have learnt to descend straight down, in the style of helicopters! The ground is soon packed with the birds.

If you look at this scene from above, all you see is a mass of blue-gray backs, with a few necks popping up now and then. But if you watch from ground level, it is a fascinating scene. You see a crowd of spindly legs and bent necks, and long orange beaks urgently pecking at the grains spread on the ground. Meanwhile, thousands of other birds circle and hover in the sky, awaiting their turn at the dinner table. As the last of the birds finish feeding, there is a fluttering of wings and all the cranes are gone, as suddenly as they came. Then it is time for the sparrows and pigeons to return and pick up the leftovers.

As March approaches and the days get warm, the people realise that soon it will be time for their winged guests to fly away to their summer homes. By mid-March, Kheechan wears a deserted and desolate look.

Is it just the free food that brings the birds? Kheechan does have some special features, scientists say. It lies in a semi-arid region, with large areas of empty land and big sand dunes around it. These provide open and undisturbed spaces which cranes need for wintering. The three village ponds provide drinking water and shady trees for the warm afternoons. There are also plenty of small pebbles, and accretions of gypsum are a source of calcium for the birds.

Other experts point out that in this vast desert region there are also many other places with similar advantages. But nowhere else do cranes settle in such huge numbers. So it is the traditional hospitality of the people and the feeling of security the birds get which gives this village the edge. Says one scientist, only half jokingly, "Maybe, by now Kheechan is in the genes of these birds!" George Archibald, director of the us-based International Crane Foundation, feels that "Kheechan is unique. I know of no other place in the world where cranes have such a close and long-enduring attachment to a village and its people."