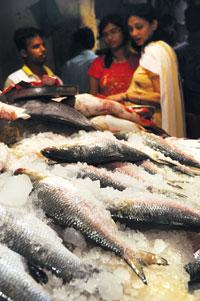 In Bangladesh, journalist Shankarlal Das recounts that hilsa could be had for a taka some 40 years ago. “During monsoons my father would come home dangling a hilsa from both hands. Mother would then take over.

The nigella seeds (kalaunji) would splutter in mustard oil, the fish make a crackling sound and very soon the house would be filled with appetising aromas. My mother insisted on saving this oil and using it later to make other dishes.”

The journalist was speaking of a region’s love affair with a fish that dates back centuries. Prakritapaingala, a prakrit text written some 600 hundred years ago, has a somewhat sombre description of this love affair that also tells something about gender roles. “Fortunate is the man whose wife serves him on a banana leaf some hot rice with ghee, hilsa, fried leaves of the jute plant and some hot milk.”

Food writer Chitrita Banerjee believes, “The mystique of the hilsa can be understood in the context of a larger Bengal, which was split into two by the 1947 partition of India—West Bengal in India, and East Pakistan, which later became the country of Bangladesh.” For people in pre-Partition Bengal, River Padma was the geographical line dividing east and west. Over time, demographics reinforced this division, Muslims forming the majority in East Bengal and Hindus in the west. Cooking techniques and food preferences reflected religious and sub-regional differences. However, a common bond of culture and language persisted: rice and fish remained the ideal Bengali meal on both sides of the border, with hilsa evoking memories of pre-Partition days.

The fish featured in the bedtime stories parents told their children about the exploits of Gopal, the wise and witty jester at the court of King Krishnachandra—often regarded by Bengalis as their culture’s answer to Birbal. One of Gopal’s most famous accomplishments was buying a pair of hilsa and then walking all the way from the market to the king’s court without anybody talking about the fish in envious tone.

The boatman who brought the hilsa was celebrated in literature. In Manik Bandhyopadhyay’s classic, Padma Nadir Majhi—later made into a film by Goutam Ghose—the boatman comes home in the wee hours under a delicately clouded sky with the light from a solitary lantern illuminating the niche in the boat where lay hilsa he had caught with much effort.

After the influx of migrants from the eastern borders, a constant one-upmanship ensued between the two communities. This found expression in the two favourite pre-occupations of Bengalis: food and football. The expatriates swore by East Bengal club, while people from the west rooted for Mohun Bagan. An East Bengal victory over Mohun Bagan would mean the smell of hilsa in mustard oil would hang in the air for several days in Kolkata’s neighbourhoods. A win for Mohun Bagan meant a treat of prawn delicacies.

Banerjee writes that Bengali’s could spend several hours of adda or heated discussions about which hilsa was superior— the hilsa from the Ganga or the one from across the rivers in the Padma. “The hilsa from the Padma is succulent and sweet. The one from the Ganga would do, but only on a lean day,” Sarbani Basu recounted her mother-in-law, originally from East Pakistan, as saying. Basu believes that the Padma hilsa is plumper and oilier, but the leaner Ganga hilsa flakes off easily.

But these are minor differences. The rui might have ceremonial significance, the bhetki might be the stuff of haute parties, but hilsa evokes memories of friendly banter, auspicious days and joyful family meals. “A ‘true Bengali’ is said to be one who takes in a mouthful of hilsa and then sort out the bones from the flesh,” Basu said.

On auspicious days like the Saraswati Puja, many Hindu Bengali families buy a pair of hilsa (joda ilish). Banerjee believes, “hilsa is strongly linked to the Bengalis’ seasonal appreciation of food.” The first monsoon rains which stirs all creatures back to life after the searing summer heat is often celebrated with khichuri—rice and dal cooked together, flavoured with ghee, ginger, and whole garam masala, and freshly caught hilsa. Bengalis have cemented the association of hilsa with monsoon by naming the petite droplets, which follow the torrential rains, as ilishey guri—hilsa droplets.

“The hilsa was an item with which my mother sometimes constructed an entire meal,” Banerjee writes in her book, Food and Life in Bengal. “We started with a few pieces of fried fish and the roe. Then plain rice was enlivened by pouring over it the oil in which these had been fried—the bare teaspoon of mustard oil in the pan usually increasing to half a cup with the rendered fat from the fish. The head came next, fried, broken up into pieces, and combined with the leaves and stems of a green called pui. The bulk of the fish was divided into two portions, one cooked with a ground mustard paste, its pungency merging into that of the mustard oil, the other (bonier portions of the back) made either into a jhal with hot red chili paste, or an ambal with tamarind pulp.”

There are variations in how people from the east and western parts of Bengal treat the hilsa. In parts of Bangladesh, hilsa roe with karamcha, a very sour berry, is an exquisite savoury. Onion is an anathema to people from the west, who cook the fish in mustard oil. The oil has a pungency that balances the strong hilsa odours, though in recent times Bengalis use other vegetable oils. But in Bangladesh, the fish is cooked with ghee, coconut milk and even sugar.

In its preparation, hilsa breaks all rules. Bengali Muslims who shudder at the thought of eating flesh that has blood throw all taboos to the wind when it comes to hilsa. Hindus, who also flinch at the thought of unwashed fish, are not keen on cleansing the hilsa of blood. The blood is said to make the fish tastier. “Bengalis of all religion will wash the fish only once,” Banerjee writes.

Once the heads and guts have been removed and the body scaled the hilsa is halved along the spine lengthwise. But the cut stops at about 5 inches above the tail where the body becomes too narrow. The tailpiece is set aside. The two longitudinal halves are cut usually into pieces an inch thick. The belly has large bones and the flesh has more oil, which makes it the more delectable portion. The back makes a good fry or tastes well in a stew with vegetables—the jhol.

With the ecology of the hilsa changing, the monsoon delicacy might be less frequent on the Bengali platter.