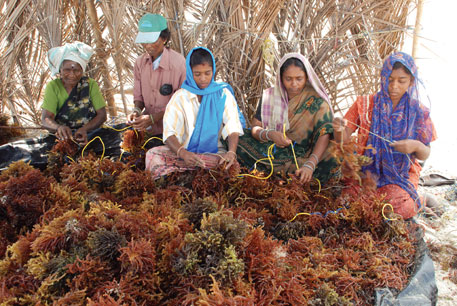 Abhiram Seth has learned to take the controversies—and there are quite a few—and the ironies surrounding the cultivation of seaweed in Tamil Nadu in his stride. Seth is the managing director of AquAgri Processing, a Delhi-based company he set up in 2008 to buy out Pepsico India Holding’s seaweed business in Tamil Nadu. The seaweed case is most often cited by the National Biodiversity Authority (NBA) to illustrate how benefits flow to local communities from the use of genetic resources. But it is also used by critics to highlight how approval was given by NBA without proper environment impact assessment and without putting in place a monitoring mechanism.

Instances of access and benefit sharing (ABS) as they are known in the terminology of the Convention on Biological Diversity (CBD) are not many in India and the seaweed case lends credibility to this concept. Since 2007, Pepsico India and AquaAgri have contributed over Rs 37 lakh to NBA’s National Biodiversity Fund, making it the largest single royalty payment. The fund has Rs 97 lakh, of which royalties account for Rs 43 lakh and application fees make up the rest. Monies in the fund are meant to be used for conservation of biological resources and the socio-economic development of areas rich in biodiversity.

The irony, however, is that the biggest inflow of money for benefit-sharing remains unutilised. In an interview in August, Seth told Down To Earth: “It is still stuck in procedure, although we have worked on five plans with NBA.” In July 2010, NBA had said the money was “yet to be ploughed back to the benefit claimers” because of lack of guidelines on how the fund should be utilised. The money is lying idle is because Tamil Nadu is yet to set up biodiversity management committees (BMCs) in areas where AquAgri operates. BMCs are local committees that are the ultimate beneficiaries of benefit-sharing.

The biggest irony, however, is that the seaweed operation of Pepsico/AquAgri has nothing to do with accessing local genetic resources; it is contract farming. The project started in 2000 as a corporate social responsibility initiative of Pepsico, says Seth who was earlier executive director (exports) with the US multinational till he quit in 2008. The seaweed (Kappaphycus alvarezii) is grown by the fishing community in Ramanathapuram, Thoothukudi, Pudukottai and Thanjavur districts with technology support from Bhavnagar-based Central Salt and Marine Chemicals Research Institute (CSMCRI) which gets a three per cent fee. So far, 3,000 tonnes have been exported. Seaweed is grown on tethered rafts in the sea—the required area is leased from the Tamil Nadu Port Authority—with planting material also provided by the company. After 45 days, it is harvested, dried and carrageenan is extracted from it. This substance is widely used as a thickening agent in processed foods.

How does NBA come into the picture? Under the Biodiversity Act of 2002, all seaweed (whether mined or cultivated) was clubbed together by the Commerce Ministry and needed NBA clearance for exports. “For NBA permission we are slapped with a five per cent fee although this is not a biodiversity issue,” says Seth. However, he claims to have no problem with the royalty since the money goes to the community.

But there is a more serious concern related to this venture. Scientists have found that Kappaphycus alvarezii—it is alien to the area—has invaded coral reefs in the Gulf of Mannar Marine National Park, a 560 sq km reserve which is the habitat of the rare seacow, dolphin and dozens of coral species. The commercial cultivation of Kappaphycus alvarezii has come under a cloud, although there is no certainty of who is responsible for this invasion by alien species. The needle of suspicion points to CSMCRI which had in 1996 started a project to grow the algae in perforated bags in the open sea.

But it still leaves wide the question of NBA’s role. Did it take into account the consequences of growing a non-native alga in the proximity of the marine reserve? What kind of assessment did it make before granting permission? Does it have a monitoring mechanism for such ventures?