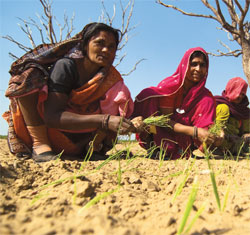 It’s been more than seven months. Farmer representatives from 12 villages in Nawalgarh are on a sit-in protest outside the sub-divisional magistrate’s office. Their demand: do not give our fertile land to industry.

Three cement giants are eyeing this limestone-rich area in Jhunjhunu district of Rajasthan. Limestone is the prime ingredient for cement production. In 2007, the state government notified 5,769 hectares (ha) for their plants and ancillary mines, saying the area is of “little agricultural importance”. It granted over 4,600 ha to Ultratech Cement of Aditya Birla Group, 780 ha to Shree Cement of Rajasthan and 825 ha to India Cements of Chennai. Rajpal Singh, sub-divisional magistrate of Nawalgarh, says 90 per cent of the notified area is private-owned and about 15,000 farmers stand to lose their land.

The protest started in November last year when farmers in four villages received notices, which said the government is acquiring their land for cement plants. Landowners can collect the compensation amount—Rs 18 lakh for a ha of irrigated land and Rs 17 lakh for a ha of unirrigated or rain-fed land—from the district administration’s office, it noted. 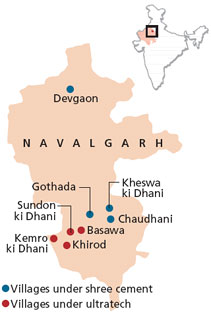 The acquisition was for Shree Cement, which had requested the Rajasthan State Industrial Development and Investment Corporation (RIICO) to acquire land for its plant. The company is buying land directly from farmers for its mine. Around the same time, officials of Ultratech also negotiated with farmers in four other villages to buy land for the integrated cement plant (see map).

India Cements is yet to start work on its project.

The government did not consult us before deciding to give our land to the industry, says Vinod Kumar of Gothada village, where Shree Cement is setting up its plant. He refuses to part with his 100 bigha farm (9 bigha=1 ha) no matter what the compensation is. It is the only source of living for his family of six. Kumar continues to grow wheat, groundnut, onion, mustard and pearl millet on his land, and, on lean days, goes to the tehsil headquarters to join the farmers, staging sit-in protest.

Government officials say they held public hearings in February 2009 before acquiring land for Shree Cement. Kumar and other residents of Gothada say they were not informed. The hearing was conducted in a hurried manner in the presence of very few farmers.

Farmers also complain of fraudulence by the companies while buying land. For instance, says Navrang Lal Doot of Basawa village, the Rajasthan Land Tenancy Act prohibits companies from purchasing land belonging to Scheduled Castes and Tribes. But the companies are buying land in the name of their Scheduled Caste agents and employees, Doot alleges. Basawa is one of the villages where Ultratech is setting up its cement plant and mine.

Companies are paying different compensation to farmers, says Srichand Singh Dudi, general secretary of Rajasthan Bijli Kisan Union (RBKU). Some are giving in to their coercive persuasion, he adds. Arjun Rabad of Gothada received Rs 33 lakh for his 18 bigha land notified for Shree Cement. “The company offered another Rs 32 lakh for my haveli and asked me to relocate,” he says.

Bodhuram Dhaka, a 50-year-old farmer of Basawa, received a similar offer from Ultratech. He rejected it. “Here I know the nature of my land and reap three harvests a year. Even if I purchase land somewhere else with the compensation amount, there is no guarantee that it will be fertile,” he adds.

Dhaka’s neighbour, Rameshwar Lal Sunda, who was among the first few to have sold land to Ultratech, has already borne the brunt. The land he bought from the compensation money in neighbouring Sikar district turned out to be unrewarding. He now plans to join the protesting farmers.

Both the government and companies are confident the farmers will eventually give in. V K Sharma, additional general manager of Shree Cement, says since the area is rainfed, it is good for the farmers to accept compensation and find suitable land somewhere else. “The government will anyway acquire their land.”

“If the area is so water deficient, why are the companies setting up their plants here? Won’t they require water?” asks Dudi of RBKU. As per the district groundwater department, Jhunjhunu falls under the overexploited zone where the groundwater is withdrawn more than double the rate it can be replenished.

Sharma of Shree Cement says their plant will follow the dry process of cement production which does not require much water.

However, with agitation brewing, Ultratech has limited its project area to 1,000 ha and recently changed its land acquisition strategy. It stopped buying land directly; so far it has purchased about 200 ha. In January this year, it signed an agreement with the government, according to which RIICO will acquire the rest of the land for its plant and mining units in Nawalgarh. “The process becomes smoother when government acquires land,” says an official with Ultratech Cement.

A RIICO official asking not to be named explains how: As per the Land Acquisition Act, if the government thinks a project is in public interest it can acquire land against the wishes of its owner. The Rajasthan Land Revenue Act gives the state exclusive right over its mines and access to such land, he adds.

On February 6, weeks after Ultratech signed the agreement, the farmers called a mahasabha under the banner of Nawalgarh Kisan Sangharsh Samiti and vowed to strengthen the agitation. “The government is working hand in glove with the cement companies to uproot farmers from their land,” says Deep Singh Shekhawat, husband of the sarpanch—they call them sarpanch-pati—of Gothada. Pratibha Singh, former MLA of Nawalgarh, who spoke at the convention, says it is easy to say that farmers can buy land outside Nawalgarh, but either no fertile land is available or it has become expensive follwoing the land acquisition in Nawalgarh.

Singh has been opposing land acquisition since she was in power. In January 2008, Singh, along with a few farmer representatives, wrote a petition to the Union Ministry of Mines to cancel the notification. The ministry set up a tribunal, which said the notification was in contravention of the Mineral Concession Rules of 1960, where companies are required to furnish the consent of land owners before the government issues notification. Taking a suo moto decision, the tribunal cancelled the notification in July 2009. The companies immediately challenged its decision in the Rajasthan High Court, which ruled in their favour.