In an atmosphere of deepening mistrust on the India-Nepal border, Bihar farmers find it difficult to build check dam 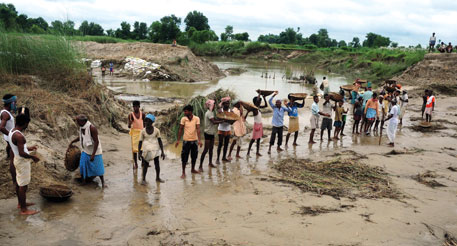 A cavalcade of 2,000 men, shouting at each other on top of their lungs, passes through the countryside of Raxaul in East Champaran. Dangerous-looking farming tools in their hands give an impression of an impending riot.

“It happens every monsoon and we are not scared of either bullets or the river,” a few angry men in the cavalcade say. Their talk raises questions and suspicion. After much prodding they explain that every monsoon about 2,000 farmers march towards the Bangari River along the India-Nepal border in Raxaul in Bihar.

More questions follow. Irritated, a well-built farmer agrees to give all the answers. “We will change the course of the Bangari towards our dry paddy fields,” Ram Ekbal, former head of Sirishiyamal village says. Offering a seat on an old tractor, he explains like a confident engineer that the people will change the river’s course by constructing a 30-metre-long and 16-metre-wide check dam in indigenous style. He then picks up a small sandstone and starts drawing the dimensions of the dam on the tractor’s floor.

Strangely, he first draws a wall of men.

“The strength of the dam depends on this wall of men,” he says. Before the discussion is over the tractor reaches the bank of the Bangari. The site of the dam is barely 30 metres from the India-Nepal border and 20 metres from no man’s land. After getting a whiff of the construction plan, a posse of armymen is keeping a close watch.

Suddenly, farmers turn more abusive and a group of 500 men rush towards the river to form a human wall. “Their role is to brave the strong water current,” Bhuyali Thakur, 60, says. Men forming the human wall across the river put arms around each other’s shoulders and tightly clutch each other. Their bodies block the water to an extent. The water level behind them dips, allowing another group of 700 men to place a bamboo frame across the river. A third group of about 500 men starts putting sand bags before the frame.

Within an hour, water before the wall of men starts rising. It climbs up to their shoulders, nearly choking them. Men forming the wall pull out of the water and the group that was placing the sand bags before the bamboo frame rushes to replace them. The role switch will keep happening.

Caked in mud and sweating profusely, Ekbal apologises for the abusive language. “They turn abusive to gather courage through anger,” he says.

It will take the farmers a month to complete the check dam. For five hours the farmers have been trying to tame the river. Twice they placed the bamboo frame and sand bags which drifted away. They begin the work again.

On being asked if there has been any death in the course of construction of the check dam, some farmers fly off the handle. “We have been building this check dam every year since the independence of the country. Even children know this simple engineering,” says one. They add that they have never seen a government official visit their village. “The only government employees we see are these soldiers,” says one of them and they burst out laughing.

In recent years, the dam has become controversial, with Nepal’s security forces and villages objecting to it being built so close to no man’s land. On August 25, Nepalese security forces warned the farmers by waving their guns. Indian security forces intervened and the construction work was stopped. It resumed a few days later.

Farmers frankly talk about the problems on the Nepal side arising from the dam. It inundates a few villages, but it also helps a few. The rising water level blurs the international border.

“We face the wrath from both sides,” Ekbal says. Work does not end with the dam; it needs constant surveillance. A group of villagers has to guard the dam when the river is in full spate. In case the dam develops a crack, it needs immediate repair. “If we do not repair the dam immediately then the river will wash away the entire structure,” he says. The presence of farmer-guards in the night is another eyesore for security forces.

Sub-division Raxaul in East Champaran district is infamous for human trafficking and smuggling of fertilisers, fake Indian currency and firearms. It is also a safe entry and exit point for dreaded criminals of both India and Nepal.

“We only need water for our fields. Harassment by security forces is unjustified. If we were smugglers we would not be working day and night for this check dam,” farmers say. They cannot construct the check dam at a safe distance from the border. The 500-metre-long rivulet that carries water to the paddy fields is near the border. Farmers say if they build the dam away from this site then the water won’t reach their fields.

The check dam irrigates close to 20,000 hectares of paddy fields that feed about 25,000 people. The annual exercise of building the dam involves people of seven villages, Mushbara, Birta, Harpur, Bahrurhiya, Basatpur, Sirishiyamal and Mahadeva. The construction site is 2 km from Sirishiyamal village.

The farmers cannot afford to buy or rent mechanised equipment for constructing the dam. Each family in the villages donates Rs 100 to buy firewood and ration for one month. “When the construction begins work goes on day and night,” Ekbal says. Farmers’ wives take charge of setting up a community kitchen near the construction site. The hard work does not end with the dam. After the construction, farmers rush to plough the fields.

District magistrate of East Champaran, Abhijit Sinha, refutes the claim of villagers that government officials have never visited these villages. He says recently a team from the district irrigation department went to the dam construction site to find a solution to the problem. “We held talks with the Nepalese administration through the Union external affairs ministry to resolve the issue,” Sinha says. He admits that things do get complicated because the villages are close to the international border. The district administration says a permanent dam will be built soon and water will be easily available for farming.

Maybe not so soon, hint sources in the water resources department in Patna. They say construction near the international border is not allowed anywhere. The issue of villagers building a check dam was brought to the department’s notice by the security forces a few years ago. It has been kept on hold to maintain peace on the border.