...is yet another example of monstrous short-sightedness on the part of governments bent on addressing their needs without a thought for the environment 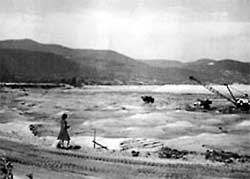 Date: February 17, 1997
Venue: International Court of Justice (icj), The Hague, The Netherlands
Subject:First international environmental lawsuit involving the Danube river and the destruction of its ancient wetland region in Hungary

the Szigetkoz wetlands (literally 'thousand islands') in Hungary are drying up. The crisis erupted in 1992 when Slovakia diverted approximately 32 km of the river along the Hungary-Slovakia border into her own territory and left the Hungarian wetlands to desiccate. Hungary responded by taking the matter to the icj the same year. But while the case awaits a decision, 200 species of flora and fauna, some of which cannot be found anywhere else in the world, are slowly dying.

As the first environmental lawsuit before the icj, the case has a lot of signi-ficance. "The ruling could set a precedent by deciding whether nation states can do as they please with their rivers or if humankind also has some rights when the ecosystems of the planet are threatened, irrespective of where they are located," says Bela Liptak, the editor of Environmental Engineers' Handbook and also the president of the Foundation to Protect the Hungarian Environment, which is spearheading the agitation against the destruction of the wetlands. In a bid to garner support, Liptak's organisation has seriously campaigned against the ill-effects of the project on the wetlands.


The impasse has its origins in 1976, when the governments of erstwhile Czechosolovakia and Hungary, in a burst of unnatural wisdom, decided to tamper with nature and dam the Danube. On May 6 of the same year, the two countries signed the Joint Agreed Plan to construct the Gabcikovo-Nagymoros barrage system, which involved the diversion of the Danube to a new river bed or canal that would produce electric power, become the new route for international navigation, manage water supplies and aid the economic development of neighbouring regions. The system was to consist of a reservoir, two diversion canals and two hydroelectric power plants located in present-day Slovakia and Hungary (Gabcikovo and Nagymoros respectively). In 1977, the two countries also signed the 'Treaty Concerning the Construction and Operation of the Gabcikovo System of Locks' -- also known as the 1977 treaty.

Hungary was forced to halt the construction of the Nagymoros dam in May 1989 because of pressure at home, which according to Patrick McCully in his recently published book, Silenced Rivers -- the Ecology and Politics of Large Dams, was more an expression of a people's revolution against a "deeply unpopular" regime. However, the newly-formed state of Slovakia continued to proceed with the construction of the Gabcikovo dam, which is now functioning.

What was overlooked in the '70s by Hungary and Czechoslovakia and later by Slovakia was the environmental impact of the mammoth projects on the ecosystems of the surrounding regions. irn has ranked the project as among the 10 most environmentally-destructive hydraulic engineering projects in the world. Besides, environmental experts predict that within 10 years of the Gabcikovo dam becoming operational, water pollution levels in surrounding areas will rise significantly. Environmental assessments made on the plant noted that the project would cause serious problems to the supply of drinking water, the water table, natural resources and plant and organic species. Also disconcerting is the probability of the dam being able to withstand neither seismic shock nor winter ice. A sudden melting of ice along with the onrush of strong winds could push the ice against the dam and if it is unable to withstand the pressure, it could endanger the lives of the people downstream. Slovakian officials dismiss these environmental reports as alarmist and tout the energy benefits of the dam.
Visiting the site on October 24, 1996, Liptak found that not a single island remained as the region had totally dried up. The fish had died, the birds had left and vegetation, which has survived since the last Ice Age, was also dying.

The diverting of the river into a canal has also proved costly to the people of neighbouring areas. Many residents of Bodiki village bordering the river have migrated from the area, leaving the old and infirm to fend for themselves. With its natural flow blocked, the river has become a mire of sewage dumped into it at Bratislava, Slovakia and Budapest, Hungary. Drinking water supplies from the Danube have also been greatly affected. Slowing the flow in the old river bed is expected to seriously affect fish breeding. In fact, when work started on the Gabcikovo project, thousands of dead fish were found lying on the banks of the river. Groundwater levels fell to 12 feet below the soil.

The diversion of the river by Slovakia is also causing economic hardship to Hungarians. It has altered the natural border between the two countries. This violation of international law has changed the trade route. Cargo ships bound for Hungary have to now cross Slovak territory, implicitly making them liable to Slovak tariffs and duties. This has the potential to strangle Hungarian trade in case of a conflict between the two countries. In order to avoid a conflagration in the region, the European Community (ec) initiated a series of discussions between the two countries in November 1992. ec hopes for a compromise over the amount of water diverted to Slovak turbines so that the environmental damage to the region can be mitigated by ensuring sufficient water levels in the old river bed. The Slovaks want to remove an average of 1,400 cubic metres of water per second (or two-thirds of its natural volume) from the river to fill its diversionary canal and a nearby reservoir. Hungary is seriously opposed to this plan, citing the negative impact on the quality of drinking water in the region. The reduced flow in the river would threaten water reservoirs with increased deposits of polluted clay, according to a study published in 1994 by the wwf, Switzerland. Slovakia has been asked to divert only a third of the Danube's flow and leave the remaining two-thirds of the water in natural river bed by the ec. But the country has stated that its turbines must have at least two-thirds, and that if the Hungarians want to raise the water level in the original river, they can build auxiliary dams. This could prove as ecologically damaging as the diversion itself, feel the Hungarians.


With Slovakia unwilling to relent, the only hope for the wetlands is a favourable decision by the icj. Four issues are lined up before the court:

l Was it legal for Slovakia to divert the Danube into its territory?

l Was it legal for Slovakia to build the c-variant facility, which diverted the river?

l Did the cancellation of the 1977 contract by Hungary make the contract invalid?

l Did Hungary have the right to terminate the construction at Nagymoros?

Observers are of the opinion that Hungary can win the lawsuit if it can effectively defend its cancellation of the 1977 contract by stating that the contract itself was invalid. This it can do by quoting the 1947 Paris Peace Treaty, which requires that Hungary and Slovakia obtain the approval of the 'great powers' prior to the signing of any pact that would affect their borders. The United Nations charter also declares a contract invalid if it is obviously one-sided. Other reasons for Hungary's cancellation could be that one of the parties to the contract (Czechoslovakia) no longer exists, or that the contract was signed under similar outside pressure (by the erstwhile Soviet Union) as was the Warsaw Pact, which has since been annulled. If Hungary wins the case, both nations will be given six months to come up with a detailed agreement for implementing the icj ruling.

Liptak's organisation has chalked out a compromise plam, which has many takers even among Slovak ngos but has been rejected by Slovak President Vladimir Meciar. The plan returns the Danube to its natural riverbed by eliminating the c-variant and starting a Dunakiliti-Gabcikovo system upstream, redesigned to withstand seismic shock and provided with ice handling capability. This would help Hungary retain her border river, her wetlands in Szigetkoz and her drinking water supplies. Slovakia can benefit by keeping all the energy generated at Gabcikovo. And, when the river's flow is reduced, though the system cannot generate electricity, it would still allow shipping on the otherwise stagnant canal.