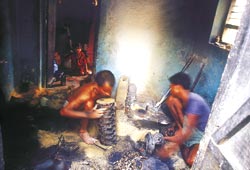 Aligarh, an industrial town of Uttar Pradesh, is spread over an area of about 40 square kilometres and has a population in a little in excess of six lakhs. The city has two distinct parts -- the old city and the civil lines. Whereas, the old city houses most polluting industries, the new city boasts of the Aligarh Muslim University (amu), the main government offices, residences of ex-zamindari elite and wealthy businessmen.

The communal divide is distinct in the residential pattern of the city: certain pockets in the old city are dominated by Muslims, while other localities are Hindu-dominated. Most of the Muslim-dominated mohallas (localities) in the old city are located in the centre and are surrounded by Hindu localities. Interestingly, most artisans are Muslims and large-scale brassware exporters Hindus.
Aligarh is famous for its lock industry and brassware industry. The District Industries Centre (dic) maintains some patchy data on industries in and around the city. Only 1,000 lock industries are registered with it. But conservative estimates point out that there would be more than 5,000 such units. The turnover of the lock industry is about Rs 200 crore per annum. And the entire brass industry fetches Rs 600 crore per annum, of which Rs 250 crore comes from export alone. Y K Singh, general manager of dic candidly admitted that no one knows how many industries are housed on Aligarh. The dic is in a quixotic situation. On the one hand it is mandated to go all out and industrialise the city. On the other, it can do precious little to combat rampant pollution. In fact a dic official told me there were areas in the old city literally out of bounds for government officials. No official from the power or the water department had 'guts' to go and collect taxes. If some brave government official dared to venture there, he would be beaten black and blue, and sent back!
In one such area, I dared to enter. Uppar Kot is a residential area in the old city. A staggering 90 per cent of households here run an industry inside. Picture this: narrow dingy lanes, overflowing naalis (drains), small cramped houses-- that hardly get any sun -- diesel smoke, deafening noise. This is typical Uppar Kot; here, the ground floor of the 'house' has an industry and the mezzanine floor houses the family.

While I was standing inside one such factory, the earth kept shaking. I was afraid it was a tremor. Then the factory workers tried to put me at ease -- it was just heavy machinery! Since electricity is erratic (eight to 10 hour long power cuts), diesel generators have a field day. Zahid Ali, an industrialist, told me he uses at least five litres of diesel per day. There is no ventilation in these factories. The atmosphere inside is a combination of toxic diesel fumes and dust from machines that scrub aluminium, brass or steel.

The hazards the workforce is exposed to is quite palpable. Nevertheless, I did not see even a single worker with protective gear -- only in one factory, they were wearing Gandhi caps made out of newspaper! The light in these factories usually comes from one 60 watt bulb. In a room of, say, 10 feet by 12 feet, about six workers work for 10 hours a day. Their positions are fixed, for there isn't much space to move around.

While exploring these countless tiny units, I also came across children. Each time I entered a factory, the owner would glare at them; they would immediately get up and leave the room. Forget talk; I was never allowed to go anywhere near. I was told these children only 'fetch' food for the workers. But, of course, both the owner and I knew that they were labourers.

A dic official later told me that child labour is a necessary evil. These children are also bonded labourers -- a crushingdouble curse. A father works in these industries; the work is such that they die young -- victims of tuberculosis. Then the child steps in, condemned to take the father's place so that a family can be supported. A clear-cut master-slave relationship! No one knows how many children are employed in Aligarh's lock industry. The labour department says 15,000; amu claims not less than one lakh.


These small industries also use chemicals in electroplating, which then dribble into open naalis. The brass industry uses trichloroethylene, an immensely hazardous chemical. Regulation on their use is non-existent (see: 'TCE cripples', Down To Earth, July 31, 2003). Even more strangely, no one knows how many different chemicals are used. No one has ever surveyed these industries. The threat from these chemicals looms large: Aligarh city is completely dependent on groundwater. 48 tube wells suck out this water and supply drinking water to city residents. The chances of the groundwater being contaminated are immense. But who cares?

The Uttar Pradesh Pollution Control Board (uppcb) does issue periodic threats to industries. But it can do nothing about it. Moreover, the artisans are poor and have little choice-- either die immediately of starvation, or die after 10-15 years of some pollution-related diseases. They obviously prefer the latter.

A visit to another mohalla, Sonpal, was a real eye-opener. One could imeediately make out the enormity of poverty in this area. Sonpal houses most of the city's foundries. Here, the poor daily wage artisans cast the moulds for locks and brass products. The houses-cum-foundries are smaller than the houses at Uppar Kot. The front room (5 feet by 5 feet) is the foundry. The other room -- the only other one -- is the bedroom-cum-kitchen. These foundries are entirely family run: fathers, sons and daughters work together, and a person can earn up to Rs 100 per day.


A visit to Sonapal revealed why relocating Aligarh's brass and lock industry is such a huge problem. The state government has known for a while that this industry pollutes. In 1992, it developed a 350-acre area about 10 kilometres away from Aligarh, calledTalanagri. All the lock units were to be relocated there. There were neat plans to set up common effluent treatment plants, to treat the waste. But no industry moved. Why?

I was bombarded with answers from industrialists. Firstly, most artisans and small-scale industrialists are Muslims. And Talanagri is a Hindu-dominated area. So Muslims do not want to shift there. Secondly, the owner does not run the industrial unit alone; the entire family works in the unit. Hence, it makes sense to have a house-cum industry: it saves travel cost and time. Women in the family can also be safely employed. This also seemed a valid point. Because of these reasons, insignificant to us but significant to the artisans, relocating polluting units remains a pipe-dream in Aligarh. And pollution is for real.

Aligarh poses complex questions, and I have no simple answers. The industries, hitherto confined to the old city, are now spreading into new residential areas, such as Shakti Nagar. When I went there, residents literally touched my feet to help them keep away these 'monsters'. Sarita Kumari, who lives there, showed me a crack in the wall of her kitchen caused by the tremors of a heavy genset which runs 24 hours a day right next to her house. She complained they couldn't sit out in their courtyard. The labourers use filthy language. Girls in the family, she said, remain locked up inside the house.

Amidst all this, the uppcb is faced with an identity crisis. It has failed to make any headway on the city's pollution problem. In 1997, an order mandated the dic to issue no-objection certificates to 220 categories of industries. dic went the whole hog with the order, but to no avail. This is because the state government would much rather promote industries. Also, small-scale industries with a turnover of less than rupees one crore do not require registration. Rajeev Upadhyay, the regional uppcb officer, told me that the city was sitting on a time bomb, which could explode any moment. His office was set up as late as 2000.

Even now, industrialists do not take the uppcb seriously. Show cause notices from the board are thrown into dustbins. Recently, the uppcb issued closure orders to 12 industries. When I asked a Mitra Nagar industrialist -- his unit was issued such an order -- if he had shut down his factory, he disclaimed any knowledge of such an order!