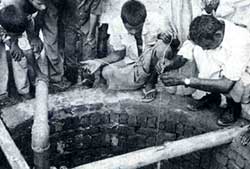 TUBEWELL-related deaths in the green revolution districts of Haryana due to the victims getting trapped in poison-gas pockets formed, some say, by heavy use of fertilisers, are rapidly approaching their usual post-monsoon peak. Since 1987, there have been hundreds of tubewell-related deaths in Haryana, in particular in the districts of Ambala, Karnal, Kurukshetra, Panipat and Sonepat, where heavy use is made of fertilisers.

Some scientists assert the gas-pocket problem is made acute by the steady drop in the water-table because of excessive use of groundwater for irrigation, which results in increasing the concentration of pesticides and fertilisers in some tubewells. Others put the cause down to the gas which occurs naturally in deep wells.

Among the latest tubewell deaths reported this year were those of two brothers in Sohega village in Sonepat district. On July 12, 1992, Ram Kishore entered a tubewell pit to switch on the motor and was instantly killed by the poison gas accumulated inside the pit. A little later his brother Suresh, who was waiting outside, went into the pit to look for him and met the same fate. The villagers rushed to the nearest block office for help in getting out the bodies, but the block employees were not adequately trained to handle the situation.

In July-August 1988, tubewell-related deaths numbered 35 in the districts of Karnal, Kurukshetra, Ambala and Yamunanagar, the major share coming from Karnal. In many of the affected villages, rice transplantation came to a standstill as panic-stricken villagers refused to operate tubewells.

Farm labourers, especially migrant ones, fail to report such incidents for fear of losing their jobs. Surjeet Singh of Nagala Megha village died after he was forced to re-enter his landlord's tubewell pit even though he had complained of feeling suffocated the first time round. The landlord then threatened Surjeet's family and prevented them from reporting the accident at the block office.

Another badly managed aspect is compensation. Some families were given compensation by the district administration in 1988, but no compensation has been announced since then. Rajbala, widow of Sukhbir of Rasulpur village, said she received a mere Rs 9,000 as compensation from the government. Another widow bitterly complained, "Is a man's life worth just Rs 9,000? This is the compensation given for dead animals."
No medical care is provided for those who survive the gas pits and the exact impact of the gas often remains unknown. Labourers continue to live with physical injuries and lacking medical attention.

Normally, a farmer installs electric motors for tubewells on the ground. But overexploitation through tubewells have all combined to drastically lower the water table in the entire agricultural area of the state. The farmers are thus forced to dig pits to install motors within an optimum suction lift. These pits are deepened in the course of time and their depth can reach 60 feet below ground level. According to a survey conducted by the Central Soil Salinity Research Institute (CSSRI) in Karnal, 60 per cent of the electric motors were lowered in 1988, 26 per cent in 1987 and 8 per cent in 1986. Ten years ago, the ground water level in Karnal was high enough for motors to be placed on the surface.

Gas accumulates in these dry wells and deep pits. According to R Chandra and N T Singh of CSSRI, "Clinical reports on victims confirm their death due to asphyxia, a condition caused by lack of oxygen and excess of carbon dioxide. In the absence of oxygen, oxygenation of red blood corpuscles is prevented. There is congestion in the lungs and brain.... We therefore feel carbon dioxide is the culprit."


The groundwater cell of the agricultural department in Karnal states, "The poisonous gas is reported to be carbon dioxide by the medical experts and the forensic laboratory in Madhuban." Scientists believe that carbon dioxide, which is 1.4 times heavier than air, gets accumulated at the bottom of the pit. Decomposing organic matter such as straw, animal dung and dry weeds present at the bottom of the pit can also be a source of poison gas.

Hydrologists at the groundwater cell say heavy use of chemical fertilisers in green revolution areas could have vastly increased the carbon dioxide resulting from chemical residues in the soil. So, when it rains, the rain water forces the carbon dioxide to move laterally till it encounters a pit where it then settles.

However, B D Dhawan, Institute of Economic Growth professor who has studied groundwater issues, disagrees. He is doubtful that increasing fertilisers and pesticides accumulating in well-water are responsible for accumulation of carbon dioxide. According to him, the gas occurs naturally. But the difference is that now that the water levels have dropped so drastically, farmers have begun placing their tubewell motors in deep pits. Rama, professor emeritus at the National Geophysical Research Institute at Hyderabad, says studies show concentration of carbon dioxide is as much as 2 per cent of the air, while the normal concentration is only 0.03 per cent.


The district administration, the groundwater cell and the agriculture department have formulated a set of precautions to be followed before entering a tubewell pit. First, lower a burning lamp into the pit to ascertain the presence of carbon dioxide. Four to five kg of lime (calcium oxide) dissolved in water should be sprinkled into the pit before someone enters it. Alternately, a table fan can be lowered into the pit and run for at least an hour to force the carbon dioxide out from the pit. The fan should be left on while the labourer works. Farmers, too, have worked out their own safety measures.

Permanent remedies suggested are that the walls and bottom of the pit should be sealed with plaster. Wet wells with pits deep enough to touch the water table are also suggested because by exposing groundwater, a free water surface is available for absorbing gases. However, farmers find unplastered pits cheaper.


The number of tubewells and pumping sets are increasing rapidly and a large number of these are illegal because they lack official power connections. Further drain of electricity occurs because instead of the three- or five-horsepower motors that were being used earlier, farmers now use seven- and 10-horsepower motors to draw water from the rapidly depleting water-table.

The drastic fall in the groundwater level in the green revolution areas in Haryana has prompted district groundwater cells to check water levels in various villages. On the basis of the results shown in their selected village wells, around three dozen villages in the district of Karnal were declared dry in 1988 itself.

As long as the level of groundwater in the green revolution districts keeps falling, farmers will continue digging pits to draw out the maximum water from the ground. And Haryana's labourers will continue to face the agony of poison gas deaths.