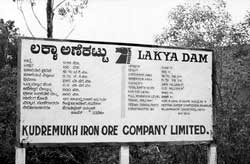 Destruction often comes disguised as development. Nobody knows this better than the inhabitants of Kudremukh National Park (knp) in Karnataka, who have witnessed years of mindless mining and the consequent loss of habitat in the state's 'protected' area. But now, the locals with the support of wildlife groups are seeking to arrest the trend by waging a relentless legal battle against Kudremukh Iron Ore Company Limited (kiocl) -- the public sector undertaking responsible for extensive damage to the ecosystem. The large-scale resistance follows the mining company's refusal to relinquish its hold despite the expiry of its initial lease in 1999 amidst a prior notification declaring Kudremukh as a national park with a total area of 60032.40 hectares (ha).

With kiocl now asking for an extension of lease for the next 20 years and demanding inclusion of fresh land around Gangamoola area for mining, prominent environmental groups like Karkala-based Kudremukh Wildlife Foundation, Bangalore-based Wildlife First!, Wildlife Conservation Society and Environment Support Group along with Belthangady-based Nagarika Seva Trust and Parisarasaktara Okkuta have taken the contentious issue to the Supreme Court. Last year Delhi-based Legal Action for Wildlife and Environment (law-e), and K M Chinappa, trustee of Bangalore based Wildlife First! filed an application in the Supreme Court contending that mining in the protected area was illegal.

Following this, the Court issued notices to the Union and state governments and kiocl to file an affidavit as to why mining was being allowed inside a national park. This forced the state government in June 2001, to issue a final notification of the park covering 53,600 ha area, thus protecting Gangdikal and Nellibeedu region from mining. The move was hailed as a great victory by most wildlife non-governmental organisations (ngos) but also came in for condemnation as in the same notification, 3,700 ha of forest land was excluded from the national park to facilitate continuation of mining by kiocl in the already broken area of Kudremukh. Though the legal fight is far from over as the Apex Court is yet to pronounce its final judgement, the intense activism and powerful public opinion has rendered kiocl's chances for getting a lease renewal bleak. Hopeful of a positive outcome, conservation scientist Ullas Karanth says "There were no wild life or forest laws earlier and this region went by default to the mines; but now we have laws and we should not allow the mistake to continue."
Nestling in the lap of the fragile Western Ghats -- world's famed bio-diversity hotspot, Kudremukh was declared a reserve forest area as early as in 1913-14 by the erstwhile Mysore government. With geological studies by National Mineral Development Corporation (nmdc) revealing a wealth of iron ore years later, the state government in 1969 granted a 30-year mining lease to the corporation that included 5,218 ha of forestland. The lease was later made over to kiocl and an open cast mine was set in the heart of Kudremukh in the hills above the source of Bhadra river.

In 1980, studies on impact of mining on ecology by Indian Institute of Science (iisc) recommended that an area of 38,800 ha be declared as a biosphere reserve as any further activity will only accelerate the loss in the ecosystem. As a result, in 1984, declaration of 'Kudremukh notified area' was issued and with it locals, wildlifers and environmentalists started questioning the validity of allowing mining in the core domain of the notified area. The company came in for heavy criticism for the adverse impact of mining at the source of the rivers Bhadra and Tunga. Several naturalists observed the disappearance of many varieties of fish while farmers complained of decline in agricultural productivity downstream due to deposition of mine tailings and increased sickness and disease due to pollution of the Bhadra river. Their case was strengthened when an extensive study in 1984 by Karanth, found that Kudremukh harboured the largest contiguous population of endangered lion tailed macaque. Based on this report, greater protection was granted to the area in 1987 when Kudremukh was notified as a national park with a total area of 60,032.40 ha.


Despite measures by the state government, in response to these grave concerns, trouble has been brewing in the Kudremukh area following a series of fresh ecological fallouts as a result of unabated mining. kiocl's belligerant move to increase the height of Lakya dam by 35 metres without a prior permission from Karnataka State Forest Department in 1991-1994 has already submerged 340 ha of land outside the lease area. The situation was aggravated when a crack appeared in the dam, forcing evacuation of kiocl township and the villages 45 kms downstream upto Bhadra reservoir. Though the crack was later fixed, threat of the dam collapsing is far from over.

kiocl, however, remained impervious to these environmental disasters, charting out fresh proposals to build a second dam called Kachige Holey to hold more silt deposits. It was only under tremendous public pressure that the company was forced to scrap its plans. Meanwhile, there have been frequent leakages in the slurry pipe that carries the iron ore to Mangalore. In February 2000, the pipe broke twice, spilling tonnes of iron ore and polluting the Bhadra. For the inhabitants of Kudremukh, mining is today a source of multiple troubles. As K N Murthy, district forest official of Kudremukh wildlife sanctuary, says "With the mines, hundred other companies starting operating. Roads and dams were constructed and vehicles were plying -- all in the core area."

All this, however, did not bring kiocl operations to a halt. The mining activity continued even after expiry of the lease on the basis of a temporary work permit. Complexity came into the picture when the Union governement resorted to double speak following kiocl's demand for an extention of lease for 20 years. While the forest department asked the state to stop the mining activity within the notified area, the Union government recommended a five-year extension for the company to wind up its operations. But later under pressure from the mining and other lobbies, it recommended a 20-year lease and was even willing to get the mining area denotified from the park. However, intense public pressure forced the state government to go back on this recommendation in favour of the five-year phase-out plan. While kiocl appears firm in its resolve to continue mining despite a fresh notification of Kudremukh National Park covering 53,600 ha by state government last year, concerned groups have their fingers crossed as they anxiously await the Supreme Court's verdict. Niren Jain of Kudremukh Wildlife Foundation says, "We are waiting for the judgement but have achieved a lot. At least the state has decided not hand over fresh areas for mining."