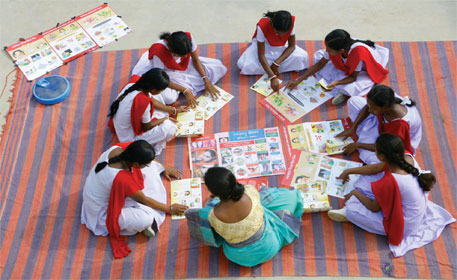 Eleven-year-old Indumati Katla, who lives in Wazirpur, Delhi, went to school on July 17. There, her class teacher asked her to gulp down a maroon tablet. Two hours later, she was in hospital recuperating from severe nausea, giddiness and fatigue. She was among the 200 government school students in Delhi who fell ill that day after being administered iron tablets as part of the Weekly Iron and Folic Acid Supplementation (WIFS) programme.

Centre launched the programme to tackle anaemia among adolescents in the country under the National Rural Health Mission in mid-July this year.

In 2000, the Centre had launched Unicef-Adolescent Girls Anaemia Control Programme, which was implemented in 13 states. But the programme was not addressing a large number of adolescent boys who were anaemic. WIFS was planned for all adolescents between 10 and 19 years.

“The beneficiaries of WIFS will be 6 crore boys and girls studying in class 6th to 12th in government schools, aided schools and 7 crore out-of-school adolescent girls, through anganwadi centres,” said Union health minister Ghulam Nabi Azad when the programme was launched. According to Census 2011, more than 5 crore adolescents are anaemic in the country.

Health experts slam the very concept of the programme, saying the government has taken the easy way out. Anaemia is a condition in which the body has less number of red blood cells. This decreases the capacity of blood to carry oxygen to different parts of the body. Iron deficiency is the most common cause of anaemia, but other nutritional deficiencies like that of folate, vitamin B12 and vitamin A can cause it too.

“Iron is one constituent of haemoglobin. The most important constituent is protein. Low haemoglobin also results from deficiency of Vitamin A and copper,” says health activist Veena Shatrugna who has worked with National Institute of Nutrition, Hyderabad. “Long-term solution to anaemia is diverse and healthy diet since childhood. What children get in government’s mid-day meals is khichdi. They need eggs three to four times a week besides other nutritious food,” she says. Tablets help to recover very low haemoglobin, she adds. Shatrugna is also a medical doctor.

Implemented without a plan

“A working and well implemented WIFS is needed to reduce anaemia in the country, says Vandana Prasad, member, National Commission for Protection of Child Rights and founding member of Public Health Resource Network.

Problems arose because “teachers were not trained to administer the tablets,” says Rakesh Gupta, director, National Rural Health Mission, Haryana. A government schoolteacher in East Delhi, who did not wish to be named, says, “Government agencies told us to give one tablet to each student every week. We were also given strict instructions to finish the first lot of medicines within three days.” To finish the stock, some children were given the tablets for two consecutive days, she says. Human body cannot accept overdose of iron.

The vice-principal of a municipal school in Delhi says teachers do not require training to administer iron tablets. “It is common sense to give medicines only after taking food,” he says. However, administering iron tablets on empty stomach was the major reason for students taking ill across states. A Unicef report notes sufficient amount of water should be consumed for proper absorption of the tablet.

Health minister of Delhi A K Walia discounts the cases of students falling sick after consuming iron tablets. Such problems can occur in one per cent of the cases, he says.

Reports of nausea, giddiness and diarrhoea discourage parents from allowing their children to take the supplements. A Unicef study conducted in 2011 after the launch of Adolescent Girls’ Anaemia Control Programme states that in Jharkhand, some parents did not allow their daughters to participate in the programme because they assumed that the tablets were contraceptive pills.

“The main reason for the fiasco in the programme is the casual attitude the authorities have towards the beneficiaries who are mostly children of the poor,” says Ashok Aggarwal, advocate and Right to Education activist.

It is crucial to control adolescent anaemia to reduce prevalence of anaemia in the country. Young boys and girls undergo hormonal and physical changes at this age and require more nutrition. Girls start menstruating at this age.

“In India, the marriageable age is low compared to other countries. This results in a substantial number of girls becoming mothers when they are still adolescent,” says Sushma Dureja, deputy commissioner, adolescent health. This starts a cycle of mild anaemia. A child born to an anaemic mother is likely to have low iron and haemoglobin levels and low iron storage capacity. If not treated in infancy, it can lead to childhood anaemia and later adolescent anaemia. Not treated at this point, the individual can become anaemic for life, says Dureja.

Anaemia reduces a person’s productivity due to low level of energy. One feels sleepy and cannot concentrate. Immunity level of the individual can go down leading to frequent illnesses.

World Health Organization recommends a three-pronged strategy to control anaemia—dietary diversification and improvement, food fortification with iron and other essential micronutrients such as vitamins and minerals, and regular consumption of iron and folic acid supplements.

Tablets cannot replace food, says Mira Shiva, public health activist and coordinator of Initiative for Health and Equity in Society. “Even tablets are absorbed and become effective only with good food. Government cannot look for short cuts,” she adds.