Vedanta gets tracts of thorium-rich land along the Orissa coast for a university. Allegations fly 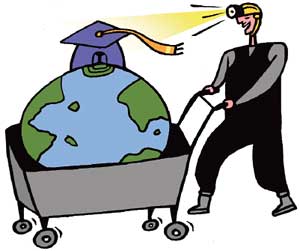 Mining giant Vedanta’s proposed university in Orissa will not only be one of the few in the world with an outlay of Rs 15,000 crore and spread across 2,400 hectares, it will also sit on land rich in thorium deposits.

Politicians and activists have been questioning the need for so much land ever since the Orissa government signed an agreement with Vedanta Foundation for the university in 2006. The land the state government has allotted for Vedanta University is about 10 times the combined area proposed for IITs in Bihar, Andhra Pradesh, Rajasthan, Orissa, Gujarat, Punjab, Himachal Pradesh and Madhya Pradesh.


The university’s estimated cost is double the combined cost of the eight IITs.

“Even a world-class institute like the University of London has an eight-hectare campus. Why is so much land required for a university?” asked K V Singh Deo, leader of the BJP Legislature Party in the Orissa Assembly.

Atomic Minerals Directorate for Exploration and Research has identified 1.82 million tonnes of thorium-bearing monazite resources along the coast of Orissa, Prithviraj Chavan, Minister of State for Science and Technology and Earth Sciences, told the Rajya Sabha in November 2009. Besides nuclear fuel thorium, the land allotted for the university along the Puri-Konark marine drive also contains ilmenite, lignite and zircon. “University project promoter Anil Agarwal could end up mining the land,” said Deo. “We had warned the state government when it was pushing through the Vedanta University Bill in the Assembly.” The bill, passed on July 30 last year, awaits the governor’s assent to become an act.

The BJD government led by Naveen Patnaik has denied the possibility of Vedanta exploiting minerals, saying the company has been granted only surface right over the land. But illegal mining of sand rich in rare minerals on the Puri coast is common, Deo pointed out. The National Institute of Oceanography has also identified illegal sand mining as one of the reasons behind depleting beaches in Puri, he added.

Industry analysts say privatization of nuclear power generation and atomic minerals mining could give Vedanta the opportunity to mine rare earth minerals. “The government has announced it intends to amend the law to allow private companies in nuclear power generation and possibly other aspects of the fuel cycle. In anticipation of this several firms are planning acquiring minerals and technology,” a business analyst, who did not want to be named, said.

The Indian Rare Earths Limited (IREL), set up by the Union government, also plans to mine thorium deposits in the sand of Puri beach in the future, a senior IREL official told <i>Down To Earth</i>. IRELis already mining rare earth minerals along the Gopalpur-Chhatrapur coast in Orissa.

Most of India’s thorium deposits are present in the beach sand of Kerala and Orissa. Atomic Energy Act, 1962, specifies that exclusive rights of any land, where atomic minerals can be obtained, are compulsorily vested in the Central government, the official said.

Critics also claim the land was allotted to Vedanta in violation of laws. Jayant Das, a Supreme Court advocate and former advocate general of Orissa, has filed a petition in the Orissa High Court against Vedanta University, pointing out illegalities. His opposition is based on his reading of the University Grants Commission Act, 1956. Under the act any private company limited by guarantee (registered under Section 25 of the Companies Act, 1956) cannot acquire land to set up a university.