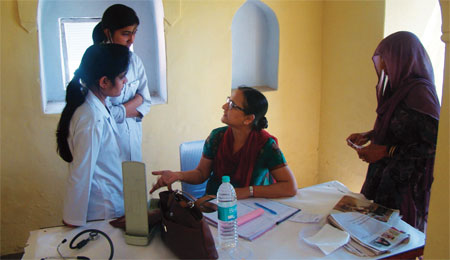 The fate of a new healthcare course to meet acute shortage of doctors in rural areas is uncertain. The Parliamentary Standing Committee on Health and Family Welfare has rejected the Centre’s plan to introduce the three-and-a-half year course, tentatively called Bachelor of Science (Community Health) course. The committee presented its report in Rajya Sabha on March 19.

Public health experts have high expectations from the course as it aims to create a cadre of mid-level health practitioners for rural India that struggles with just one doctor per 10,000 people. WHO recommends at least one doctor per 1,000 people. The new cadre of health practitioners would not replace MBBS doctors, but be trained to handle preventive care and simple medical procedures for which services of an MBBS doctor are not required. They would be posted at community and primary health centres.

The Centre’s plan to introduce the course came following directions of the Delhi High Court, which was hearing a public interest petition filed in 2009 by Meenakshi Gautham, public health expert with Delhi non-profit Public Health Foundation of India (PHFI) and the Garhwal Community and Development Society. They wanted speedy introduction of the course that was proposed by the Central Council of Health and Family Welfare, an apex advisory body, at its ninth conference in 2007. That year, the Task Force on Medical Education Reforms for National Rural Health Mission (NRHM) had also recommended introducing the course.

In November 2010, the court directed the Medical Council of India (MCI) to finalise the syllabus within two months and the Ministry of Health and Family Welfare to begin the course by March 2011. However, it ran into rough weather after the Indian Medical Association (IMA), a body of health professionals, raised objections, saying the course will create half-baked doctors for rural people. “Internationally, in modern system of medicine, MBBS is the basic minimum degree accepted for prescription of medicines. Anything less than that would mean diluting the course,” says Narendra Saini, IMA’s secretary-general.

The Parliamentary committee suo moto took up the matter. A majority of the 11-member committee opposed the course. “This is despite the fact that when the committee consulted with us we took cognisance of its concerns and made changes to the syllabus,” says an MCI official. The syllabus is ready keeping in mind the 2013 session.

Owing to the delay, Gautham has filed a contempt petition in the court.

Professionals v practitioners The Parliamentary committee rejected the course despite acknowledging the positive role played by rural medical practitioners in Chhattisgarh and Assam, where the governments introduced their own courses in 2001 and 2005. It cited that Chhattisgarh had to discontinue the course due to discontent among the practitioners about their career path. Besides, says Parliamentarian Sanjay Jaiswal, who was part of the committee, each district will have a medical college during the 12th Five Year Plan period. “Where is the need for the course then? Also, there are nearly 60,000 unemployed AYUSH (Ayurveda, Yoga, Unani, Siddha and Homoeopathy) doctors. Why should they not be employed instead of a new course?” Jaiswal asks. Not all regions have adequate numbers of AYUSH doctors. Northeastern states have the lowest density of doctors from alternative systems of medicine. Rural medical practitioners have also been found more efficient than AYUSH doctors in tackling health problems in rural areas. A study by Krishna D Rao of PHFI, shows rural medical assistants (RMA) in Chhattisgarh performed as good as physicians and better than AYUSH doctors. While 61 per cent of prescriptions by MBBS medical officers and RMAs were appropriate for treating the health conditions, only 51 per cent of prescriptions by AYUSH doctors and 33 per cent by paramedics met this standard. This supports the use of RMA-type clinicians for primary care in areas where posting MBBS doctors is difficult, says the report to be published in Social Science and Medicine in May 2013.

Experience from Assam too shows a positive link between rural medical practitioners and healthcare indicators. Since introducing the three-year diploma course in Medicine and Rural Health Care in 2005, the state has produced 354 Rural Health Practice diploma holders and has posted them in various districts. 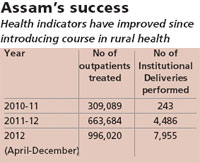 “The course has really helped,” says D Chakrapani, director of Centre for Innovations in Public Systems, a Hyderabad-based non-profit which has studied the impact of the course on public health care. “Our data shows services at community health centres (CHC) and public health centres (PHC) have improved since the introduction of the course,” he adds (see ‘Assam’s success’). Similar models have shown impressive results worldwide. As per the 2011 World Health Statistics report, between 2001 and 2005, India’s doctor-to-population ratio was 0.5 per 1,000, while that of China was 1.6 and Cuba was 5.9 (see ‘Crucial bridge’). “Estimates indicate we will not have the required doctor-patient ratio till 2035. The proportion also remains highly skewed in favour of urban India. We cannot have people suffering in rural parts till then,” says Gautham.

To meet lack of doctors in rural India, Saini suggests upgrading CHCs to medical colleges. “This will require less money compared to what will be required for creating new infrastructure altogether.” He also suggests motivating MBBS doctors to serve in rural areas. But a similar programme, Aao Gaon Chalen, initiated by IMA in 2004 has failed to make a dent in the rural healthcare. So far it has been able to cover only 1,039 villages of the 600,000-odd villages in the country. Impact of the programme has not been documented yet.

Public health experts advocating for the course say the battle is far from over as the matter is pending in court. Pranav Sachdeva, advocate of Gautham’s case, says the report of Parliamentary committee becomes mandatory to follow only after the Parliament approves it. Usually the government accepts some suggestions and rejects others. “Even if the government is not legally bound to accept the recommendations, the committee’s view carries weight for policy makers,” he adds.

Besides, health being a state subject, states can always take it upon themselves to introduce the course. “States should be sensitised about this. Funds from Central schemes like NRHM can be diverted to create the pool of rural health practitioners,” says Chakrapani. Assam, which has invested Rs 6.42 crore as capital cost and spends about Rs 10 lakh a month for training 90 students, sources the fund from multiple government agencies, including NRHM and 12th Finance Commission. To address dissatisfaction among this new cadre of professionals, Gautham suggests that the government should give them incentives and possibilities to have a better career in future. There should be a provision to promote them to the post of medical officers, or an option that having served for five years, they can get an MBBS degree within two years of study. After all, there experience would count, she adds.