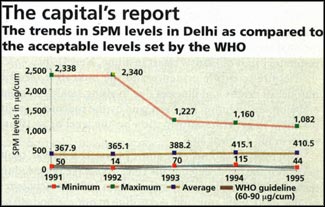 More people have died in Delhi between 1991 and 1995 by inhaling small suspended particles laden with toxic chemicals. The levels of spm spiralled dramatically from 367.9 micro gram per cubic metre (g/cum) in 1991 to 410.5 g/cum in 1995. spm levels in Delhi have crossed the annual average critical limit of 60 g/cum set by the who by five times and the average peak value has often reached the dangerous level of 1,400 g/cum.

"But such an inventory is too simplistic and does not account for the extremely hazardous small particulate emission, mainly from vehicles, which is now emerging as the key health concern in the context of air pollution in Delhi," says S K Chhabra of the Patel Chest Institute, New Delhi, who has studied the health effects of air pollution on school children in Delhi. His study in 1995-96 establishes air pollution as one of the major causative factors behind the 10 to 12 per cent incidence of bronchial asthma in the age group 5 to 16 years.

Chhabra argues that discussing spm emissions as a generic problem from all sources diverts attention from the more lethal emission of small particulates -- pm 10 and pm 2.5 -- which are increasing significantly due to the rapid growth of the transport sector. who has classified these as thoracic particles as they have greater penetration due to their smaller size and get lodged deeper in the lower respiratory tract. Small particulate emission, mainly from diesel fuel combustion engines in vehicles and electricity generators, are coated with polyaromatic hydrocarbons that are carcinogens and can be fatal to humans.

Significantly, while reporting 40,000 premature deaths due to air pollution in Indian cities about three years ago, the wb study had stated categorically that small particulate emissions including pm 10, pm 2.5 and sulphur dioxide are responsible for over 95 per cent of the health damage. The incidence of respiratory diseases in Delhi is 12 times higher than the national average, guesses Naresh Trehan, head of the cardio-respiratory unit of Escorts Heart Institute, New Delhi.

Despite scientific evidence and the indicative trend in number of deaths and illnesses due to rising small particulate emission, no attention has been paid by the Indian air quality planners to generate information on the level of pm 10 and pm 2.5 in the ambient air. Not ready to shoulder the entire blame, D K Biswas, chairperson of the cpcb , defends his role. "We have reviewed the national ambient air quality standards in 1993 to include respirable particulate emission. According to our method, 40 per cent of the total spm is respirable. So any increase in it would automatically indicate the proportionate increase in respirable particulate emission." Another study published by the wb on air quality in Mumbai in 1996 provides field evidence to support the approximation that about half of the total spm comprises pm 10s. The study also makes the dramatic revelation that about 40 per cent of the pm 10s come from the transport sector.

In Delhi, there has been a major crack down on industrial units with a relocation order from the Supreme Court (sc), and piling of pollution control obligations on the thermal power plants to reduce air pollution. But there is no way to control the mobile sources of pollution in the city. Even cpcb officials admit that the prospect of a rising trend in diesel vehicles in Delhi has grave implications for small particulate emission. A 1993 cpcb report had indicated that diesel vehicles comprise 6 per cent of the total number of vehicles in Delhi that are responsible for 19 per cent of vehicular pollution. In an affidavit to the sc in response to a public interest petition on the air pollution in Delhi in November 1996, the Delhi state government had submitted that 100 per cent of particulate emissions from vehicles in Delhi came from diesel vehicles.

Clearly, the inability of the government to act on time and ensure substantial reduction in sulphur levels in diesel is responsible for high particulate emissions. In Western Europe, maximum sulphur level in diesel has been brought down to 0.05 per cent, whereas in India, even the targeted level -- to be met by the year 2000 -- is 0.25 per cent. The current level is one per cent. Although diesel with 0.25 per cent sulphur has been introduced in Delhi this year on a priority basis, it is inadequate to address the problem. The marginal improvement made in controlling emissions per vehicle with lowering of sulphur is negated by the rise in the total number of diesel vehicles.

The government policy of keeping diesel prices low is encouraging its use for other purposes as well. Particulate emissions from private and captive electricity generators using diesel in the power-starved capital is fast emerging as another cause of worry. Large-scale use of generator sets that mostly run on cheap diesel in both residential and industrial sectors is also responsible for an unaccounted load of small particulates. A public interest petition was filed in the Delhi High Court (hc) in 1996 demanding action to control pollution from generator sets. As power supply in Delhi falls woefully short of the demand, people are becoming increasingly dependent on generator sets.

The cpcb had recently informed the Delhi hc that about 0.15 million diesel generator sets operate in Delhi. These mainly comprise small and medium sets, with a few large ones. The small portable sets have a capacity to generate 0.5 to 2.51 kilo volt per hour (kvh) of power; the medium sets between 15 to 500 kvh ; and the large ones between 500 kvh to 5,000,000 kvh. The public interest petition on pollution from generator sets has caught the officials in cpcb , Delhi Pollution Control Committee (dpcc), and the Delhi Vidyut Board (dvb) napping. The officials do not have any information on the actual installed capacity of captive power generation in the city. Although a no-objection certificate from the dvb is mandatory for installing generator sets in both residential and industrial sector, this is largely ignored due to weak enforcement. Only 3,700 generator sets have been licensed by the dvb while cpcb says that about 1,50,000 generator sets are estimated to be operating in the capital.

B Sengupta is the additional director of the cpcb . "While acoustic standards have been prescribed for the generator sets to control noise pollution, no separate emission standards have been prescribed for generator sets," he says. "Emission from generators is a new and an emergent problem. We are now considering setting standards for the manufacturers of generator sets." Under court orders, cpcb along with the dpcc have begun testing actual emissions from generator sets. The 1991-94 period was marked by efforts to implement control measures to mop up pollution from the three thermal power plants in the city by upgrading their pollution control technology. Relocation of about 10,000 air polluting industrial units was also ordered. spm levels show a slight decline from 415.1 g/cum in 1994 to 410.5 g/cum in 1995.

But even Biswas is not ready to attribute this entirely to the pollution control measures. He puts in a word of caution. "Data for just one year should not be taken too seriously. The slight decline does not necessarily mean that the pollution load has come down. While explaining these small variations you need to take account of the meteorological conditions at the time of monitoring. Only a long time frame can adequately establish the trend in pollution." Implementation of the control measures in Delhi during this period has not been successful in making an adequate impact on the air quality. While the thermal power plants have been under pressure to upgrade their pollution control technology since 1992, polluting industrial units were served closure notices only in 1996.

If industrial units contribute about 44 per cent of spm in Delhi, closure of such a large number of industries in 1996 ought to have made some impact on spm levels in 1996-97.

cpcb officials refused to divulge any information on spm levels in 1996-97 in Delhi for reasons best known to them. Biswas refuses to elaborate on the possible impact of the closure of industrial units on spm levels in Delhi. "Relocation of industrial units might have brought down the overall pollution level in Delhi. But we cannot isolate this from other factors in explaining the trend in pollution," he comments. "There are other factors that are also responsible for high levels of spm . Construction activities including road constructions and resuspension (of dust particles) from a large network of unmetalled roads in Delhi cannot be ignored. These are dispersed, unaccounted for and are continually rising due to the urban boom."

Despite orders by the sc to close or relocate polluting industrial units in 1993 and official efforts to control industrial emissions, more than 12,000 additional units sprouted in Delhi between 1990 and 1994. Though all industries were closed officially in 1996, clandestine industrial operations are still reported (dte , Vol 3, No 1). Officials in dpcc admit that the closure notices have not been very effective. "I would be happy to know how many have actually closed down. I do not have any illusions. Unfortunately, I do not have the requisite staff strength to keep a close vigil," says I K Kapila, environment engineer at dpcc. The worst offenders in Delhi are the three thermal power plants at Rajghat, Indrapratsha and Badarpur. "Instead of dealing with so many industrial units, we should concentrate on the power plants. Just three power plants produce almost as much spm as 10,000 polluting units," says Kapila. The Rajghat Thermal Power Plant (rtps) was served a closure notice for continually exceeding the prescribed emission standards in 1992. According to dpcc officials, the plant did not operate within the prescribed norm of 150 g/cum for many months prior to the shut down (dte , Vol 1, No 18). The pollution load in the emissions from the plant was between 2,000 g/cum and 20,000 g/cum before 1993. The rtps was asked to lower its emission level to 900 g/cum by March 1993. dpcc officials avoid divulging any information regarding the present status of emissions. Biswas informs that even in 1995, the three thermal power plants together were spewing 30,000 tonnes of spm per day. In addition to stack emissions, dispersal of ash from the ash ponds also adds to the spm levels in Delhi. He feels that there could not have been much change in the subsequent years as the installed capacity of these plants and status of the pollution control measures have remained almost unchanged. On the other hand, Lalit Kapoor, environmental engineer at dpcc , claims that the power plants are meeting the standards more or less after they were asked to upgrade their electrostatic precipitators (esps, air pollution control devices) in the early 1990's. But the efficacy of the pollution control equipment that has since been upgraded is doubtful.

Officials at the National Thermal Power Corporation (ntpc), Badarpur, lament that their pollution control equipment is under extreme pressure due to the bad quality of coal that has 40 per cent ash. "Very high ash content in coal makes it the root of the problem," says M H Rao, environmental engineer at the plant. But Kapila does not accept this. "Even six years ago, the ash content in coal was 40 per cent. The pollution control system ought to have been designed with that in mind. Efficiency of esp is 99.997 per cent. The only problem is that of maintenance."

It is apparent that the authorities seem to be fighting a losing battle to control spm emissions from all sources in Delhi; that is if they are fighting the problem at all, which is not what it looks like.