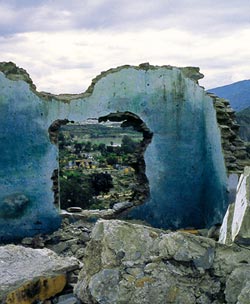 July 29 was a black day for those residents of the old Tehri town who had decided to remain back. At around 2 pm, the water in the lake surrounding the almost empty town rose and entered their homes. The 20 or so families left had to run for their lives, grabbing whatever they could. Girjesh Chandra Ghildiyal was having lunch. "We never expected this to happen. I grabbed a few eatables and ran with my wife," says Ghildiyal. "All I could think of saving were a few clothes for my children," says Saraswati Devi, his wife. Residents blame the Tehri Hydro Development Corporation (THDC), which they say had closed the T1 tunnel in March. This together with the monsoon rains raised the level of water in the reservoir upto 655 metres on the fateful day. The closing of T1 violated last year's Supreme Court order, they allege. The apex court had ordered that no tunnels be closed, or reservoir filled any further, till rehabilitation was completed.

The district authorities contend that 96 per cent rehabilitation has been done and no one lives in the old Tehri town. But in the last Lok Sabha elections, 11 polling booths had been set up in old Tehri. Strangely, on July 20, the administration had issued 44 notices to people in old Tehri, asking them to immediately evacuate. When water entered their homes, the residents rushed to the Shankeshwar Mahadev temple, located at a higher altitude. "Water levels reached the foot of the temple," says Sunil Rana, another resident.


On August 5, when the water level recedes, some families return to whatever remained of their homes. Ghildiyal rummages through mounds of debris while his daughter looks frantically for her school certificates. But whatever little they recover, they cannot transport it all out of the town.

"We are not able to hire a tempo to transport even the few things we have recovered. For the tempos, the first priority is the contractors who are demolishing the houses in the town," says Ghildiyal. So the handwritten manuscripts get precedence over the old schoolbooks. A wooden almirah is left behind for a traditional leopard-skin trunk, more than a 100 years old.

Saraswati Devi has tears in her eyes. "We have yet to be compensated. Where do we go and live," she asks. The family is now staying in the tin sheds at the New Tehri town. Despite her misfortune, she doesn't forget to offer us tea. Ghildiyal lost most of his belongings. His son is shooing away the monkeys. "Numerous monkeys have taken over the whole town," says Ghildiyal.

Not too far away, Sunil Rana sits on a pile of rubble that was his house and asks the workers to dig gently else they damage whatever is left. He has filed a case in court to get a shop in New Tehri. Since he did not hold an entitlement to the shop in old Tehri, he did not get a shop under the rehabilitation scheme. "We held occupancy for last 100 years but the original landowner got the shop in New Tehri," says Rana. He recovers a few wooden planks and a clock that has stopped. The clock's hands show 3:30 pm. Water entered the town at 2:00 pm. What is beneath the rubble? "All I had. All my forefathers' belongings, two televisions, compact disc player, music system, few CDs, clothes, and furniture," says Rana.

The bustling Tehri market -- which served the entire Tehri Garhwal district -- is in ruins. Part of the road that ran through the market remains. A few metres down the road from Rana's house, all the male members of the Daudiyal family are doing exactly the same. Then the road disappears into the water and with it half of the Tehri market.

The Ghildiyal family will come back the next day. What was lost was precious. "My forefathers had preserved numerous handwritten manuscripts. They were priceless," rues Ghildiyal. It was all planned, says his wife. "A conspiracy by the authorities to force the remaining families to leave. If this is our fate, imagine what will happen to the villagers. They will not even get a chance to escape." There are 125 villages which will be fully or partially affected. Their rehabilitation story is murkier (see box: A house for a house). Many of these villages have been resettled on agricultural land in the Terai region.