A Supreme Court order demanding immediate closure of about 250 mines in and around the Sariska Tiger Reserve has evoked little response from the Rajasthan government. 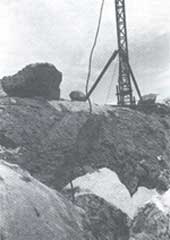 A PROTECTED forest with unclear boundaries, a tiger reserve chalked out in a limestone-rich area, mining leases whose legality is questionable -- all these have created a mess in the Sariska Tiger Reserve (STR) in Rajasthan, resulting in the Supreme Court having to intervene once again.

On April 8, the apex court accepted the recommendations of a committee, headed by Rajasthan high court judge M L Jain, that it had appointed to look into the issue. But, the state administration has shown no willingness so far to implement the recommendations. In an earlier order dated October 11, 1991, the court had ruled that "no mining operation of any nature shall be carried on in the protected area (STR)". But that order has yet to be implemented, thwarted mainly by a powerful miner-bureaucrat-politician nexus.
The latest order of the Supreme Court was issued in a public interest case filed in 1991 by Tarun Bharat Sangh, a non-governmental organisation concerned with environmental issues in Alwar district.

The order is broadly in three sections.The first immediately shuts down 215 mines located entirely within Sariska's protected forest area and 47 mines that are partly within it. There are more than 500 mines in the Sariska area. The second directsthe ministry of environment and forests (MEF) to forward within three months a report on the Rajasthan government's proposal to transfer 5.02 sq km land to STR, in lieu of an equal area where mining is going on. This would mean not only denotifying 5.02 sq km of land, but also afforesting the compensatory land to be transferred to STR. The third part requires owners of mines outside the protected forest areas but within STR, to obtain within four months, MEF permission to operate. This portion of the ruling affects about 250 mines, but they can all continue to operate for four months.

The Supreme Court notes it has accepted the report of the M L Jain committee to "ensure the observance of the various acts and notifications issued thereunder with respect to the protected areas (in STR)." It has ignored, however, the committee's recommendation to conduct a detailed assessment of the environmental impact of mining in STR. The committee had submitted its report on September 28, 1992.
Meanwhile, the mine-owners seem unperturbed by the April 8 order, describing it as "lenient" in comparison with the earlier one. Says Suresh Goyal, a mine-owner and senior vice-president of the Zila Khanij Udyog Sangh (a mining industry organisation), "The current order is full of discrepancies and has totally ignored the wealth-generating aspect of mining. If mining is stopped, Rajasthan and India will slide back into the dark ages." But environmentalists contend that the mining itself and the way it has proliferated in the region under political patronage, is the more potent symbol of the dark ages.

Goyal also contends that mining has given local people employment and kept them out of mischief. "Earlier," he says, "these people used to sell wood from the forests for a living, as land for farming is at a premium in the area. This has stopped now, but if the mines are closed, the 20,000 people who are dependent on mining in the area, will resume selling wood."

Goyal, however, had no comment on the adverse effect of mining on the health of area residents even though a Voluntary Health Association of India survey shows 29 per cent complained of acute body pains; 64 per cent, of cough, and 18 per cent, of persistent fever. None of the mine-workers surveyed had ever received medical assistance from the mine-owners.

M C Bhandare, a Congress member of Parliament who has represented mine-owners near Malana, a village outside the tiger reserve, says in justification of mining, "Valuable minerals were still to be discovered in the area before it was declared a protected forest. But when mining for limestone and other minerals began in the late 1980s, the owners assumed the 1975 notification would be superseded, especially as an earlier notification -- issued in 1966 -- contained no harsh strictures on mining."


The Rajasthan department of mines and geology had leased in 1987 land to some mine-owners who had obtained no-objection certificates (NOCs) from then field director T Saini. The mining department issued more leases the following year, but without consulting the field director. Saini's successor, Fateh Singh, has testified that Saini issued NOCs even though he was aware of the STR boundaries. Confirming this, assistant field director L P Sharma says, "Certain areas were designated as protected forest areas after the 1975 notification, but mining was allowed by the then field director. There could have been a mistake in allowing mines to operate. (However) if we have made a mistake in appropriating the land, the authorities should persecute us, and not harm the forest."

Project Tiger director A Ghosh says he had no prior knowledge of Saini granting NOCs and "it is an embarrassment for us". But he declined to comment on how a Project Tiger official could take such action without his consent. And, a law ministry source clarifies that a field director is not empowered to issue NOCs to applications for mining leases in protected areas.

Mine-owners, however, cite the NOCs as proof of legality and contend their leases are in areas demarcated under what they consider to be an interim notification issued in 1975. But the court has thrown out this argument. The mine-owners also say the forest department maps, submitted to the court to demarcate protected areas, are not authentic. But the court forest department map is similar to one made by Project Tiger authorities.

The court's judgement is unequivocal in ordering the closure of some mines, despite whatever the mine-owners choose to believe. The issue is not so much where these mines are, as whether they were legally sanctioned.

The mines around Sariska yield marble, dolomite and limestone. Central government clearance is required for the mining of all three minerals but they were never obtained before the granting of leases for any of the mines, thus making them illegal. Furthermore, all mine-owners are required to submit an environmental management plan, but none has done so.

Mine-workers near Tilwadi, a village on the boundary of the reserve, are aware their quarrying is illegal. But, says Shyam Yadav, a mine-foreman, "We are dependent upon it for our livelihood. Of late, the pace of mining has increased. Once mining is stopped, we will be forced to return to our villages in Bihar."

Numerous studies have listed mining's adverse effects on STR's ecology, especially the falling water table and high dust levels. The overburden, or mining waste, is dumped on surrounding land, rendering it infertile. Mining, adds Sharma, has also adversely affected the fauna of the region, with the number of tigers in the reserve falling from about 45 in 1985 to 22 in 1991, though this may also be due to poaching.

Bureaucratic ineptness and political greed are also blamed for STR's sorry state. Though protection against mining is more than adequate on paper, the sheer apathy of state officials in enforcing the law has allowed mining to flourish. In the 18 months since the Supreme Court's first order prohibiting all mining, mine-owners have had a field day. It remains to be seen if the state government, which has refrained from acting so far, will enforce the court's orders now, especially in the face of the enormous clout that mine-owners have with the Central and state governments.