A lot of effort has gone into programming Cassini, the last of the bigger spaceships produced by NASA. But the mission is unlike others in that the probe is 'hardwired' to study one planet, yet flexible enough to counter the unexpected 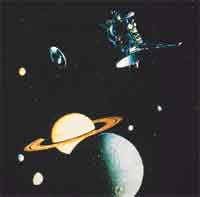 the countdown for Cassini's launch had more than its share of the drama. For the first time in the history of space exploration, people protested against the launch of a spacecraft. Most of them were convinced that using plutonium to fuel the rockets attached to the probe was risky. Cassini carries 32.6 kg of plutonium-238 for propulsion. The chances of the nuclear fuel exploding were remote. But if the rockets failed and the spacecraft slipped back towards Earth, people argued, the canisters could crack open, releasing plutonium.

According to an estimate by John Gofman, former assistant director of Livermore Laboratory in California, the fine plutonium dust released in such an event would increase the risk of deaths due to cancer by a factor of 40,000 in 50 years. The protesters had a point. A few years ago, a us space shuttle had exploded soon after lift-off and there has been at least one space mishap involving fallout of radioactive debris (see box: Falling space debris ). As one protester put it: "I'm not anti-nuke, I'm not anti-space. I'm just anti-stupid, and I've got two kids."

The fears were valid, but not justified, according to officials of the us National Aeronautics and Space Administration ( nasa ). Project officials calculated that the chances of the canisters cracking open were one in 1,400. In the worst-casescenario, they said that fallout of plutonium from burst canisters would be close to the launch site in Cape Canaveral, Florida. To allay fears, many officials brought their children and even grandchildren to watch the lift-off. But, as luck would have it, strong winds with speeds over 120 km per hour as much as 11 km up in the stratosphere delayed the launch. Cassini was finally launched 48 hours after its schedule, on October 15.


Some 45 minutes of orbiting later, the rockets made a last surge, releasing the spacecraft on its voyage to Saturn. The swinging, looping, 'slingshot' trajectory of Cassini has been carefully planned to add to its momentum. It will add years to its voyage to 'the dark planet' but save almost 78 metric tonnes of conventional fuel -- weight that would have made the mission impossible. The total weight of the spaceship is 6.5 tonnes.

The probe will reach Venus in April 1998, use its gravitational field to gather speed in a 'swing-by' that takes it towards Earth. It will curve back towards Venus and swing by the planet again in end-June 1999, gaining more speed. A few days after people in India celebrate Independence, Cassini will fly by our planet, hurtling towards the largest planet in the solar system, coming close to Jupiter in December 2000. The gravity boost from Jupiter -- in the last month of the last year of the millennium -- will be crucial for the final stage of the probe's journey to Saturn. Cassini will reach the planet some three-and-a-half years later, if everything goes as per schedule and calculations, on July 4.


Some 120,000 km across, the seventh planet in the solar system is unique in many ways. It has 17 satellites (moons), 16 of which are icy white balls -- including the mysterious Iapetus, with a permanent dark patch on its surface, and the small, brilliant white Enceladus, barely 500 km in diameter. The remaining moon, Titan, is the largest and of greatest interest to scientists and laymen alike since it may harbour life.

Most of our knowledge of Saturn is on the basis of radio wave analysis and visual observation of the planet and its moons, and photographs taken by the us space probes Pioneer 10 and 11 and Voyager 1 and 2. Voyager 2 gave some reasonably good photographs of Saturn and some of its moons. But they were taken from a distance of about 804,500 km, as the probe went past on its journey beyond the solar system, and did not have the details required for scientific accuracy. Little is known about the rings of the planet, except that they consist of debris (see box: The shape of rings to come ), or about the planet's magnetosphere (magnetic field). Similarly, what is known about Saturn's moons is speculative, based largely on the Voyager photographs.

Though they sent back data on Saturn and the outer planets, the previous missions did not concentrate on any one planet and its satellites. Moreover, they were designed to perform other functions which took up valuable space. For instance, the Pioneer and Voyager missions carried speech recordings in various languages, images representing humans, and other data to convey information about life on Earth in case extraterrestrial life forms were encountered. The Cassini mission is comprehensive in terms of the instruments it carries and the functions it is expected to perform, but will be limited to studying Saturn and its moons, especially Titan.


Both Cassini and Huygens, the space probe sponsored by the European Space Agency ( esa ), are packed with equipment to study conditions on Saturn and Titan.

There are 12 instrument packages on board Cassini. These include instruments for analysis of elements on the planet's surface and its atmosphere, to measure radio emissions within the magnetic field and charged particles (ions), winds, and temperature. The orbiter consists of two antennas, a magnetometer, radar and remote sensing equipment. Sensitive cameras will transmit full-colour photographs in the visible, ultraviolet and infrared bands of the spectrum to highly sensitive Earth-based receivers. Over 300,000 colour images of Saturn, its rings and the moons will be returned, including 1,100 pictures of Titan taken by Huygens.

All these instruments are extremely light and small, since size and weight are crucial in space exploration missions. Moreover, they consume little power. The Voyager, for example, sent back pictures of Saturn and reams of scientific data across 1,200 million km of space using transmitters that consumed only 28 watts. Cassini's instruments are even more energy efficient.

Two computers -- the command and the attitude control microprocessors -- control the instruments and the nuclear-powered propulsion system. The computers are extremely sophisticated since the mission requires highly technical operations. The kind of accuracy required in navigation of spacecraft ('attitude control') can be gauged from the fact that a speed error of just 1 mile per hour (1.61 kmph) in the Apollo spacecraft would have resulted its having missed the moon by as much as 1,600 km! According to nasa , if attitude control were the only problem, Cassini's system is so accurate that the spacecraft could maintain course for close to 200 years.

The Huygens probe, supplied by the esa , carries a robotic laboratory that it will use to scrutinize the clouds, atmosphere and the surface of Titan. To be released by the orbiter in November 2004, the Huygens probe will drop into Titan's atmosphere some three weeks later. As the 2.7 m-wide probe enters the atmosphere, it will begin taking measurements in the upper stratosphere. As it descends -- first on a main parachute and later on a drogue chute for stability -- various instruments will measure the temperature, pressure, density and energy balance in the atmosphere.

This data will first be sent to Cassini before it is downlinked to Earth. Cassini's transmitters are not very powerful, though they are accurate. Much will depend on the radio receivers in the us . The radio antennae at us tracking stations which monitor such transmissions from space are so sensitive that they can detect incoming signals with a strength of just one hundred million million millionth (10 -20 ) of a watt.

Can Cassini do it?