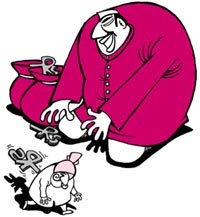 The report blames the fiscal policies of state and Union governments for the financial mess rural governments are in. According to the 73rd and 74th constitutional amendments, implementing the Panchayati Raj Act is a state subject. This means state governments control panchayats and unless they improve their financial position, local governments won't get grants or revenue. This has been happening since 1997 when government workers got such a huge pay hike that states had little funds left for development.
And when pris get resources, they don't have the autonomy to spend it according to their needs. Local bodies in Karnataka have numerous responsibilities according to the Constitution, but almost no freedom to spend money. About 70 per cent of the money meant for local governance is kept back by the Karnataka government for salaries and incidental expenses. Local bodies control less than 10 per cent of the total rural spending. "As a result, local communities have not engaged with the process of planning and accountability to the extent hoped for by policy makers," the report says.

Hardly any panchayat in Karnataka and Kerala generates revenue on its own and is autonomous from the state government. Panchayats in these states have power to raise tax but they have not been able to use this power effectively (see table: State vs state). Panchayat revenue formed less than one per cent of the state gross domestic product in both places. Local governments are unable to use their financial powers because they don't have the capacity to administer a revenue system, officials don't enforce tax laws and the tax base is low.

State governments call local bodies' inability to use their limited financial powers as 'fiscal indiscipline' and restrict fund flow. The report, however, says the fault is not with local governments but the manner in which their finances are evaluated. "As things stand at present, recommendations for fiscal reform may be made based on data that misrepresent the situation. Most important, assessment of the fiscal health of the local governments may be substantially incorrect, leading to misguided attempts at reform."

"In the absence of reliable information on the revenues and expenditures of local bodies, neither the states nor the Center can lead a reasonable fiscal decentralisation programme." There is no mechanism to monitor the performance of local governments or find information on their expenditure. Data with central and state finance commissions (sfcs) inflates the resources local governments have, and state governments then stop funds to pris. This could explain the constant cut in budgetary allocation for rural governments. "Neither the panchayats, nor sfcs, nor the government of India, nor state rural development and panchayat departments know the actual amount of funds available to panchayats, or their expenditure pattern."


Strengthening sfcs, broadening the tax base and granting more powers to pris are among the six broad strategies which the World Bank believes can create better fiscal decentralisation. Stronger sfcs are important because each state needs an organisation to track the performance of local bodies, check their finances and prepare an annual report on inter-governmental fiscal relations.

Allowing panchayats to tax agricultural land and local business can increase their tax base. Non-tax earnings like user charges, rents and license fees and a streamlined property tax mechanism, too, can increase their resources. For enabling local governments to reach the tax target set by state governments, the report recommends incentives like fund pools.

The Bank has also suggested a rethink on the three-tier structure of rural governments. Comparing India's system with other countries, it observes: "Three tiers of rural local governments below the state level with overlapping responsibilities, as in India, is costly, invites duplication of effort, and confuses the accountability objectives of the government's decentralisation program." (see table: Judging decentralisation)

The report says that the role of district and block panchayats must be identified clearly so that gram panchayats can be screened from their interference. "Thought might be given to defining more clearly the role of the districts and blocks as either primarily deconcentrated arms of the state government, or as autonomous governments representing the preferences of their constituents."

For better fiscal decentralisation, the report says gram panchayats must be given more power as they "can best detect and respond to people's preferences and needs". Panchayats should be freed from implementing programmes of state or Union governments. "States should avoid devolving responsibilities to panchayats for schemes designed completely by a higher-level government, transferring to local government staff that they did not recruit and cannot fire, or asking them to spend their resources maintaining assets that they did not create."

The report comes at the right time. India is debating on what the fund flow to local bodies should be, and no less than the prime minister is taking part in this debate. The United Progressive Alliance's common minimum programme says allotting funds to local bodies is a key issue. Donor groups and lending agencies realise that funds for rural development programmes have to be channelised through local bodies in the future.