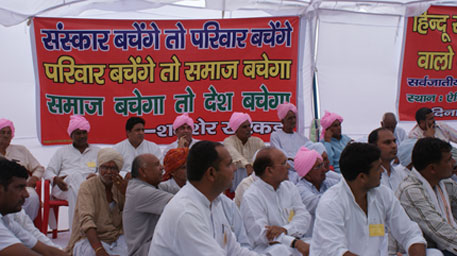 It was a season of sons-in-law in Haryana. In October, the Congress-ruled state government scrambled to clean its records in the face of alleged undue favours to Robert Vadra, son-in-law of the party president Sonia Gandhi. That month, khap panchayats, or the traditional caste panchayats notorious for their diktats in the name of honouring social customs, also grabbed headlines. They wanted to regulate the selection of sons-in-law as per their archaic beliefs. On October 29, leaders of 29 khaps met in Rohtak and demanded banning same-gotra, same-village marriages under the Hindu Marriage Act.

These seemingly unrelated developments have common roots—land. That Haryana’s land has turned rare earth is no news. But its repercussion on society is what the world is discovering now. Vadra, though not a resident son-in-law, reportedly made windfall gains from land deals in the state. Analysts say khaps now do not want their resident sons-in-law to take away the newfound gold. Their obvious targets are daughters and laws that allow them legal share in ancestral property.

Khaps largely exercise their authority over the Jat community of big landholders around Delhi, including some districts of Haryana, Uttar Pradesh and Rajasthan. Traditionally, in these areas marriage is not allowed within the gotra, which loosely means a sub-caste or clan. But khaps extend this prohibition to all inhabitants of a village and its adjacent villages, including individuals from different gotras. According to khaps, they are deemed siblings due to proximity of residence and are bound by bhaichara or brotherhood. Strangely, their diktats apply only to women.

They do not oppose men marrying in same gotras or other castes. Perhaps they cannot afford to do it. In Haryana’s six districts—Jhajjar, Rohtak, Jind, Panipat, Gurgaon and Sonipat—where khaps are active, sex ratio is the lowest in the country: there are 850-870 females per 1,000 males. Such is the scarcity of eligible brides in the state that men now “buy” brides from faraway Odisha, Madhya Pradesh, Kerala and Nepal. According to sociologist Ravinder Kaur, 37 per cent of eligible men remain bachelor in the state.

Analysts say such woman-centric codes on marriage are to control the family’s ownership over land (see ‘Khap panchayat’s codes...’). Khap members have an instilled fear that in case of marriage by choice, the girl or her husband would stake claim in ancestral property. By declaring girls and boys of the same village and adjacent villages as siblings, they lessen the possibility of young individuals getting into matrimonial alliance. Experience shows, in an arranged marriage, girls do not demand share in parental property. Moreover, if a girl is married several villages away, the possibility of her exercising inheritance rights becomes remote. They also oppose marriage between majority and minority gotras as the majority gotra administers a village and owns most of the land.

According to a study by the International Institute for Population Sciences, Mumbai, the status of women in the family is worsening with changing economic structure, reforms and mode of production. This is more so in the National Capital Region (NCR) where the impact of economic reforms was first felt. Explains Perianayagam Arokiasamy, who did the study, “Usually larger landholdings are associated with less autonomy for women.”

Women rights activist Jagmati Sangwan says khaps create false impression that they are opposed to same-gotra marriage because it is incestuous. They actually oppose the woman’s right to choose a life partner. A study commissioned by the National Commission of Women found that 72 per cent of the khap-dictated honour killings were related to inter-caste marriages, while those related to same-gotra marriages were only three per cent. “As couples are selectively targeted, it is clear that the real motive of khap panchayats is to control women’s sexuality to ensure that property remains within the patriarchal caste domain,” Sangwan adds.

Small wonder khaps have lately been vocal about the two pieces of legislation that allow a woman to marry as per her choice and secure her rights over ancestral property: the Hindu Marriage Act and the Hindu Succession Act. The marriage law does not recognise the gotra or caste system and thus does not prohibit marriage within the gotra or in other caste. The Hindu Succession Act, amended in 2005, gives daughters equal rights in the ancestral property along with sons. It also gives her the right to seek partition of the dwelling house she inherits. The previous law gave daughters an equal right only in self-acquired property of her father and a partial right in ancestral property. It restricted her right in a dwelling house, in which the joint family lived. The amendment in 2005 also deleted a section, which exempted Land Reforms Act, Land Ceiling Act and laws relating to devolution of tenancies in agricultural land, from the Hindu Succession Act. These state laws favoured male lineal descendants over wives and daughters.

Down To Earth spoke to a dozen khap panchayat members in Haryana about the Hindu Succession Act. None was willing to speak on record, but said the debate on sharing landholdings with married daughters has gained momentum since the amendment in 2005. The first such meeting took place in Rohtak in July 2005, which was attended by 21 khap panchayats. “The law allows daughters to have rights over property of their parents, in-laws and also retain individual property. Why does one need to give so many rights to women?” asks Meher Singh Jhakar, general secretary of Jhakar Khap, which exercises its authority over 36 villages in Jhajjar district in Haryana. “The new generation has new expectations that confront the traditional ways. If constitution of the UK can accept conventions as key provisions why can’t the khap principles be accepted here?”

Jats, the way we see them now, as big landholders, are the creation of centuries of fight over land (see ‘Nomads to landlords’). They opposed the Hindu Succession Act of 1956 over and again and used political leadership to prevent fragmentation of their land.

In 1967, within months of its formation as a new state, Haryana passed a resolution, requesting the Centre to amend the Act. Punjab followed suit. The Centre did not oblige. In 1979, the Haryana Assembly passed a bill, amending the Act unilaterally, and sent it for the President’s approval. The President did not give his assent. Ten years later in 1989, renowned farmers’ leader from Haryana, Chaudhary Devi Lal, proposed an amendment to the Act during his tenure as the deputy prime minister. The demand was dropped following protests.

Haryana and five other states, including Punjab and Rajasthan, which have active khaps, denied equal inheritance rights for women in parental property, especially in agricultural land, until the 2005 amendment to the Succession Act.

Going by media reports, khap panchyats did not issue militant diktats against women until 2005. This is the time the NCR witnessed a boom in property rate and became the country’s largest residential market. Currently, it has more housing units than the combined tally of Mumbai, Chennai, Bengaluru, Kolkata and Hyderabad. But since their opposition to the succession law did not work out, khap panchayats now focus on the Hindu Marriage Act to bring in provisions to stop same-gotra marriage to retain land within the family boundary.