Did the polio vaccine start AIDS?

The origin of human immunodeficiency virus (HIV) has generated considerable interest and controversy amongst scientists the world over. Flaming this interest is the theory put forth by Edward Hooper, a British journalist based in Africa, who in his book, The River, proposed that the origin of the Acquired Immunodeficiency Syndrome (AIDS) pandemic is closely associated with the way the oral polio vaccine was developed in the 1950s

By Sarita Bahl, Gautam I Menon

Did the polio vaccine start AIDS? 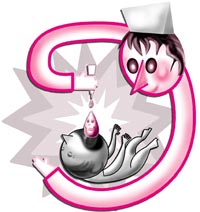 The origin of human immunodeficiency virus (hiv) has generated considerable interest and controversy amongst scientists the world over. Flaming this interest is the theory put forth by Edward Hooper, a British journalist based in Africa, who in his book, The River, proposed that the origin of the Acquired Immunodeficiency Syndrome (aids) pandemic is closely associated with the way the oral polio vaccine (opv) was developed in the 1950s. In 1987 Louis Pascal, an independent scholar based in New York City in the us, suggested that aids must have originated from contaminated polio vaccines used in the Belgium-controlled territories of central Africa (now the Democratic Republic of Congo) in the late 1950s.

The hypothesis revolves around the chat, an experimental polio vaccine developed in the 1950s by a Polish research biologist Hilary Koprowski. Between 1957 and 1960, this vaccine was developed in bulk at the Wistar Institute in Philadelphia, usa and was then administered to millions of Africans. Hooper postulates that these vaccines were cultured on monkey kidneys, which could have been infected by simian immunodeficiency virus (siv). Since no screening for siv contamination existed before 1985, no one really looked into this aspect. The vaccine was given to children less than one month old, before their immune system was fully developed. To ensure effective immunisation, in one trial, infants were given 15 times the standard dose. Says Hooper, "The siv later mutated to human immunodeficiency virus (hiv)". Julian Cribb, author of The White Death, the first book that explored the origins of aids, feels that many among the millions of Africans (infants teething, people with malaria, lung or bowel infections) who received the oral vaccine were already vulnerable to new viruses, and this weakened immune system gave the siv the opportunity to mutate into hiv.

The theory is based mainly on the fact that the earliest known case of aids occured in central Africa, in the same region where chat was administered. Koprowski denies that chimpanzee cells were ever used in preparing the vaccines. He argues that the chat vaccine was also administered to residents of Poland and other parts of Europe, and there were no outbreaks of hiv. Critics also lambast this theory, saying that it fails to explain the other outbreaks of aids associated with hiv-2, and with hiv-1 Groups o and n.

The Wistar Institute had its stock of chat examined by an independent panel headed by Claudio Basilico, chairperson, department of microbiology, New York University School of Medicine, New York, usa. The analysis of the frozen samples of the suspect vaccine did not show any evidence of hiv and no chimpanzee dna was ever detected in any sample.

Another dimension that emerges out of this whole debate is that since the time this theory was put forth in 1987 by Louis Pascal, the scientific community has responded by either ignoring or rejecting the research, almost as though it were bent upon systematically suppressing public discussion and inquiry into this hypothesis. For instance, when the Royal Society met in London in the year 2000 to examine the theories for the origins of hiv/aids, not a single scientist inclined to speak up for the opv theory was invited to the deliberations. Instead the gathering had amongst its discussants scientists who refuted Hooper's case.

The subject is so contentious in nature that we will continue to have opposing views, and the twain shall never meet. For a developing country like India, however, where polio still continues to rage its head, it is extremely vital that science explores the facts on an issue of such importance. Stanley Plotkin, a post doctoral student at the time chat was developed and now at the University of Pennsylvania in the us, is worried about the consequences of this debate. He says, "I do not think the accusation has an effect on aids vaccine development, but it certainly impinges on polio vaccination and public confidence in vaccines." As Cribb very succinctly puts it, "Down the years, humanity will probably accept that, like most disease, aids is a product of human technology change and behaviour -- and thus an accident, a terrible accident, on the part of dedicated people working on a noble cause."