Diesel vehicles still have a long way to go as far as controlling particulate emissions is concerned and at the current level of technology development, diesel is harmful to public health 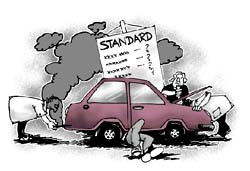 the us-based Union of Concerned Scientists (ucs) have taken the petrol vs diesel debate head on in view of the public health implications of the expanding diesel market share following rising diesel car sales in the country. The organisation is dedicated to the advance of responsible public policies in areas where science and technology play a critical role. In a recently published report "Diesel Passenger Cars and the Environment", ucs informs, "Collectively diesel-powered vehicles account for nearly three quarters of all direct particulates from us transportation and over half of all nitrogen oxides (nox) a precursor to both smog and fine particles. Urban smog is emerging as the paramount problem. "

Jason Mark and Candace Morey, the transportation analysts of ucs and the authors of the report, have compared the emission profile of vehicles running on these two fuels and the available emission control technologies. They have shown that the diesel vehicles still have a long way to go as far as controlling particulate emissions is concerned, and at the current level of technology development, diesel is harmful to public health. Although currently the diesel passenger cars make up a modest 0.1 per cent of automobile sales in the us, the authors express concern that if diesel engines capture a large share of the car and light truck market, the impact of diesel engines could increase. Developing a diesel passenger vehicle that meets the new California emission standards, the most stringent norms for diesel vehicles in the world, will require over a 90 per cent reduction in nox and a 75 per cent reduction in particulate matter (pm) over the next few years. According to the authors, this is tough as many experts view research on diesel emission reduction to be "high risk". This is because research involves heavy investment and they are not certain whether the desired results will be achieved within the stipulated timeframe.

Laboratory tests indicate that substantial reductions in diesel vehicle emissions are possible under a scenario of maximum technical success. It is much less certain that these major reductions will be achievable in production vehicles operating under real conditions.

"As far as emission standards are concerned, while pollution from diesel passenger vehicles has been cut by a factor of 5-10 over the past two decades, it must be reduced by a factor of 10 within the next few years in order to meet near-term pollution standards. The engineering, economic and infrastructure challenges are large and will require a very high degree of technical success," conclude the authors.

Despite stringent emission norms, existing regulations permit diesel cars to get away with emitting more of the two key pollutants, nitrogen oxides and particulate matter, than their gasoline counterparts. This loophole is largest for diesel automobiles, small pickup trucks and sport-utility vehicles, which can emit over twice as much nox than gasoline cars.

Many gasoline cars being sold today have nox certification levels less than half the diesel values, and some are certifying at less than one-tenth diesel levels. Emissions modelling in the us suggests that lifetime average nox emissions from diesel vehicles are roughly twice that of gasoline cars being sold in some states by 1999 and the rest of the country by 2001. The higher nox emissions of diesel vehicles may yield higher levels of nitrates, an acid aerosol that is an important component of particulate pollution, especially in the western United States.

At the same time diesel vehicles emit at least 10 and perhaps as much as 300 times more particulate matter than modern gasoline vehicles. Even emissions from malfunctioning gasoline cars appear to be several times lower than that from diesel vehicles. The report quotes studies to indicate that diesel engines emit larger numbers of smaller particles. More recently, the oil research consortium concawe tested modern direct injection diesel and conventional gasoline-powered passenger vehicles. Their most significant finding was that diesel cars emitted 10 to 100 times more nanoparticles and ultrafines than modern gasoline vehicles equipped with catalytic converters.

The report also exposed that while, for a long time, it was thought that reducing hydrocarbon emissions (coming mostly from petrol cars) would help to control ozone it has now been junked and the focus has shifted to nox. The authors point out that while during the early 1990s, vehicle regulations focussed aggressively on lowering hydrocarbon emissions as the chief ozone-reduction strategy, in recent years, the focus of new vehicle regulations aimed at ozone reduction has shifted more to nox reductions. Moreover, hydrocarbon emissions from gasoline vehicles are expected to be cut to near-diesel levels in the us as Low Emission Vehicles are introduced.

Diesel offers a reduction in one key pollutant -- carbon monoxide (co). "But in usa the problem of co persists only in some urban areas and three times more us citizens live in areas not currently meeting the federal ozone standards than in areas not attaining co standards," point out the authors. Moreover, though diesel cars and light trucks are being popularised as a short-term strategy to meet fuel economy and climate change goals, there is actually no carbon saving.

The authors conclude that urban ozone, particulates and other toxins pose major hazards, and diesel exhaust is increasingly being scrutinised as a potential human carcinogen as concern over urban smog is paramount in usa.