From major fruits like the mango, banana and citrus to minor ones like karonda and sapthei, the story is the same: genetic erosion is leading India's native fruits to the brink of extinction 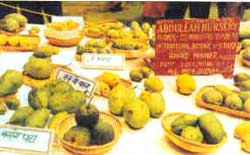 MANGO: Known as the king of fruits, India is blessed with mango diversity. Wild forms of Mangifera indica (mango) can be found in the peninsular tract, the evergreen forests in the Northeast and the terai regions. Wild forms of the allied species, M sylatica, are also found in the evergreen forests. Four of the 41 Mangifera species are native to India. Dominant areas of diversity are the humid tropical southern peninsular; the Andaman and Nicobar islands; and the humid subtropical region comprising-Manipur, Tripura, Mizoram, southern Assam, Chotanagpur plateau, Santhal region in Rajmahal hills, southern Madhya Pradesh and the Thar plateau adjoining Gujarat and Rajasthan.

Besides, Kerala and the Western Ghats form the secondary centre of mango origin in the world. This region boasts of a number of mango varieties known by local names - for instance, muvandan, chakriyan, puliyan and muttikudiyan - and are mainly used for pickles and making other culinary delights.

The number of mango varieties (varieties with-in a specie) found in India is a whopping 1,000, ranging in size from a peanut to a musk melon. Of these, quite a few are unique and several widely grown. Many mango varieties have been made possible by hybridisation, a process that has opened up endless possibilities. Two desired mango plant varieties are grown close to each other. Thereafter, it's a game of wait and watch for a new variety to emerge. Any number of varieties can be hybridised. And often, owners of mango orchards tend to get carried away. The owner of Abdullah Nursery, Haaji Kaleemullah Khan, in Malihabad is a proud owner of a mango tree that has more than 200 varieties on it. Another possibility is grafting, a way of mass propagation, where a cut is made in the twig of the desired variety and is latched on to a "mother plant".

Collection of the genetic resources of mangoes dates back to the 16th century. And credit goes to the Mughal rulers who planted seeds of all the fruits they liked. The Mughal rulers and Avadh nawabs in Uttar Pradesh planted a lakh of mango seedlings in some orchards known as lakhabagh. Many of these orchards still exist, although in a pitiable condition. Diversity multiplied as the rulers, often fruit fanatics, ordered the good varieties brought by their subjects to be planted in their gardens (see box: Mango mania).

The names given to the different varieties have interesting origins, too. The dussehri mango is named after the Dussehri village near Malihabad, not far from Lucknow, the mango belt of Uttar Pradesh. Legend has it that the "mother" tree still exists in the village. Some were named after the flavour, some after the shape and a few were dedicated to a lovelorn begum. Hence the name sophiya (which tastes like saunf or aniseed); karela (ridged like a karela or bitter gourd) and hussnara (fine appearance with an equally fine taste).

In the early 1900s, attempts were made to collect and document different mango species in a systematic manner. However, the collection that currently exists in India mostly contains cultivars which were distributed to farmers as grafted seedlings, leading to the disappearance of the less desirable, usually seed propagated, cultivars. "A lot of mango germplasm with variation in leaf shape, size, orientation, colour, fruit shape, quality and aroma have already disappeared," says M L Jyothi of the Kerala Agricultural University in Thrissur district. "And the future of what is left is alarming," he adds. Over the years a lot of genetic erosion has also taken place due to deforestation and urbanisation. Genetic erosion of these cultivars is a serious problem in the whole of Southeast Asia.

BANANA: Acknowledged as the fruit of the masses, banana is India's most favoured fruit. Available throughout the year, banana sellers are tracked down by buyers - students staying in hostels, bachelors on their way to a kitchenless residence, and householders in search of nutrition. Available in all shapes and sizes, the fruit is loaded with calcium, potassium, sodium, phosphorous, iron and vitamins. The flower also has medicinal qualities and the leaf is used as an eating plate in many parts of the country.

India is the world's second largest cultivator of bananas and boasts of several native species. The fruit can be found in various geographical locations - from the sea level to 1,500 metres above mean sea level. Several wild species have been identified in the Northeast region, which, along with the northern peninsular region and the Western Ghats, are major banana diversity centres.

But one-fourth of India's banana harvests comes from Tamil Nadu. The state cultivates more than 80 banana varieties, the most popular being malai, mondan, poovan, peyan and rasthali. While gene pools of bananas grown in South India have been well analysed and characterised, the same cannot be said of those found elsewhere, though several exploratory trips have been made by the National Bureau of Plant Genetic Resources, New Delhi, and its units located in different parts of India.

Although India is a major centre for banana diversity and several attempts have been made in the past to conserve the germplasm in gene banks, a lot of confusion exists because of synonyms (same varieties are assigned different names depending on the geographical location) and the fact that many of the species in the gene bank still remain uncharacterised. There is also a need to find virus-resistant varieties (see box: Bananas at risk).

CITRUS: A few citrus species are believed to have originated in India - the major centre of diversity being the Northeast. Parts of northwest India, peninsular region and the Western Ghats are also home to some species. However, in spite of efforts since the turn of the century to preserve the fruit, genetic erosion is still taking place.

The Northeast is blessed with citrus diversity with as many as 17 species originating here, but whatever germplasm that was collected in the Northeast in the 1950s is lost already. The fruit grows at locations which are 300 to 400 metres above mean sea level. The western parts of Aizawl district in Mizoram and Jampui hill area in north Tripura show rich diversity. Citrus reticulata, C limon and C grandis are commonly found in backyards and orchards.

However, monoculture of economically important species is replacing less preferred species like hatkora (C macroptera), not popular because of its high acidity and ascorbic acid content. Sishuphal (C megaloxycarpa), found in the Jampui hills, is already labelled endangered. "The situation is such now that fruit vendors pass off oranges from other states as that grown in Cherrapunji, when oranges are no longer found there," says A Wallang, Northeast regional programme co-ordinator of World Wide Fund for Nature, India.

MINOR FRUITS: The tribals of Maharashtra have been maintaining the ancient tradition of collecting karonda (Carissa) from the wild for sale in nearby markets. Resistant to most diseases, the hardy plant is used for various purposes by the tribals: the branches are cut and used as fences to protect agricultural fields, and dry twigs are used as firewood. The Konkan region boasts of a rich diversity but in the dry eastern regions of Aurangabad, where the population is scattered, the plant's survival is endangered. Unfortunately, according to V S Ghate of the Agharkar Research Institute in Pune, the species have hardly been studied for natural variability and horticultural practices.

Aonla is another minor fruit native to India. However, it may soon get the status of a major crop as the area under aonla cultivation is increasing at a rapid pace. Even wastelands are being used for its cultivation. Rich in vitamin C, the demand for aonla is on the rise. It is being processed into plant-based healthcare products - chyawanprash, for instance. Also, it is generating income for tribals engaged in its cultivation.

Minor fruits have not been exploited because there is no demand for them, says K L Chadha, horticulture professor, Indian Agricultural Research Institute. He, however, is the man behind the "her revolution". Chadha studied 67 varieties of the native round her-often referred to as galagottu, meaning if eaten, the sourness catches the throat - and came up with a scientifically improved tastier her variety. This also helped augment the economic status of indigenous people who were involved in its cultivation.

"No one can hate this fruit," says Zoramthanga, leader of the Opposition in the Mizoram state Assembly, of saptheior the passion fruit. Found in the Mizo hill tracts, its popularity, however, is limited to the state due to lack of transport facilities. Passion fruit juice has a great potential but as of today there are no markets. Villagers in Champhai district were encouraged to grow the fruit. But the nearest processing plant being 300 km away, the cost of transportation was way beyond the farmers' means. In anger, the villagers dumped the fruit in the streets of Champhai.