Digging its own grave

Despite its glorious past, the future of the Archaeological Survey of India is jeopardised because of internal wrangling and a lack of a concrete philosophy of exploration

Digging its own grave 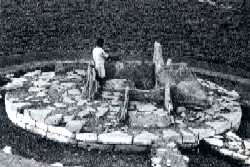 NEVER in its 134 years of existence has the Archaeological Survey of India (ASI) been bricked into such a deep controversy. Ever since Achala Moulik, a bureaucrat, took over as ASI's director-general in March 1993, a post that traditionally goes to archaeologists, resentment had been brewing over her style of functioning. The battle lines were clearly drawn between Moulik and senior archaeologists.

The raison d'etre of Moulik's appointment was the ASI'S archaic recruitment policy. Insiders said that the ASj had become her fiefdom, leading to low morale. The internal wranglings almost jeopardised the fate of the World Archaeological Congress (WAC), to be held in December for the first time in India. Moulik's critics stated she was determined to sabotage the efforts of the Congress, although the ASI has committed itself to providing expertise and money.

To retrieve the situation; the department of culture appointed on October 14 J P Joshi, who had retired as ASI's director general in 1989, as " advisor-cum -consultant with full powers of a director general". But on October 25, the department rescinded this order and sought legal opinion. And finally on November I Sitakanta Mahapatra, secretary, department of culture, was given additional charge of director general.
Founded in 186 1, the ASI has quietly built up a reputation for conserving historical monuments and pieced together facets of India's history. It was under the aegis of the Asiatic Society, founded in Calcutta in 1784 by orientalist William Jones, that early efforts in antiquarian reconnaissance coalesced. A small museum, the future National Museum, was set up to house the collected treasures.

The initial efforts of the archaeologists were limited to translating ancient texts and writing highly speculative dissertations. Yet the achievements were many. By identifying Sandrakottas as Chandragupta Maurya, Jones determined that he ruled during Bc 324 and thus provided Indian archaeology'with its first positive date. The ancient city of Pataliputra in Bihar was identified and similarities between ancient languages correctly pointed out. British orientalist like Charles Wilkins deciphered the Kutila script, J Goldingham examined the caves at Ajanta in 1793, while colonel James Tod combed Rajasthan in search of antiquity.

It was James Prinsep, secretary of the Asiatic Society from 1832 to 1840, who freed archaeology from its antiquarian roots by emphasising field surveys. The first excavation of an ancient site in India - the Dharnek Stupa at Sarnath was conducted during his tenure, in 1834, by Alexander Cunningham. Between 1834 and 1837, Prinsep also deciphered the Kharoshthi and Brahmi scripts used by Asoka (Bc 273-232), by finding out the Greek equivalents of royal names engraved in Kharoshthi on Indo-Greek coins.

Unfortunately, the British government did not give enough importance to the protection of historical monuments. On the contrary, Lord Moira, governor general from AD 1813-1823, plotted to demolish the Taj and sell off its marble, dismantle Shah Jehan's bathtub and present it to King George IV, and lease out the gardens at Sikandra for speculative cultivation.

In 1861, however, giving in to pressures in India and liberal opinion abroad, the government established the archaeological department of northern India to preserve ancient monuments. Cunningham was appointed its first archaeological surveyor, with a salary of Rs 450 and a share in the antiquities discovered by him.

Cunningham was obsessed with the idea of locating places that ancient Chinese travellers Fa Hein (AD 401-410) and Hieun Tsang (AD 600 -664) had traversed. By 1865, he had identified historic towns like Taxila (now in Pakistan), traced the history of the Buddha and Asoka through inscripitions and edicts, and published the voluminous Ancient Geography of India.

At this time, Gordon Bruce Foote of the Geological Survey of India unearthed of a paleolith from a ballast pit at Pallavaram near Madras, but the significance of this discovery was lost in Cunningham. In 1872, he picked up relics from the historic site of Harappa and passed it by. Unknowingly, he had just missed unveiling to the world the greatest archaeological discovery of this century: the Indus Valley Civilisation.

But the philosophy of archaeological was set to change. For James Burgess, director-general of the ASI in : archaeology would remain "but the history of its aim "to provide prettyful illustrations". for John Marshall, who was appointed directoral in 1902, it was a scientific attempt to recapture total culture of ancient India.

Marshall's excavation of the ancient city of Tax provided a clear glimpse of urban life in nor-west India from Bc 7 to AD 5. But the crowning this era was the unearthing of the Indus Valley in 1921 by Daya Ram Sahni, which took I history back in time some 2,000 years. Aurel wanderings in Central Asia and China unearthed Niya civilisation and "The hall of a thousand Buddhas" - hundreds of grottos shielding tempera paintings.


Another change came about between 1944 and when Mortimer Wheeler, then director of the transformed excavation methods. Wheeler, an are officer, believed that the excavation of a site was the ordering of a battle, to be thought out by a sin" present and directing mind".

"Archaeology today concerns itself with recreat of the total environment of the past," says R S Bisht, director of the New Delhi-based Institute Archaeology. There are crucial lessons to be learnt how people controlled their environment and its with the rise and fall of civilisations.

Says Bisht, "Culture is a product of a particular environment, and archaeology is a science which he recreate it. Fossils are subjected to chemical analysis and we look for evidence of climate change. Singhvi of the Physical Research Laboratory Ahmedabad, has developed the thermo luminescent method which has helped dating. The search to archaeological remains has been made simpler by go, physical methods like electric resistivity and electro-magnetism."

Says Shireen Rumagar, associate professor of history at the Jawaharlal Nehru University (JNU), archaeologists are the best diggers in the world they lack a philosophy of exploration. Since the archaeologists have been sieving dug out earth and carefully picking up minute remains of fossil grains and plants, that ancient Chinese travellers Fa Hein (AD 401-410) and recreate a lost environment. ASI's archaeologists dig Hieun Tsang (AD 600-664) had traversed. By 1865, he had impressive structures but their methods destroy eviden,t identified historic towns like Taxila (now in Pakistan), traced relating to culture, landscape or historic economy. In the history of the Buddha and Asoka through inscriptions and ways, the ASI is still treasure hunting.

The ASI has also been accused of perpetuating a "licence raj". Says Hemangshu Prabha Ray, associate professor of history at JNU: "The practise of archaeology is too centralised. The ASI needs to decentralised and leave research to the universities."

The organisation's image has also been criticised. Says Ray, "The ASI has tremendous scope to embark on awareness programmes." Adds Rutnagar, "The ASI must make the service more attractive: better pay and system based on merit ." On that point, at least, the ASI's archaeologists sagely agree.