Guru with an attitude 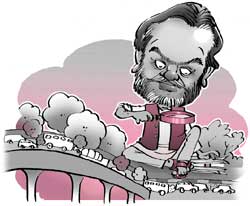 The Indian Institute of Technology in Delhi is a prestigious institution. It has a Henry Ford chair in its Transportation Risk Injury Prevention Programme (tripp) funded by the Ford Motor Company, which also has interest in producing diesel vehicles in India. This prestigious chair is occupied by eminent 'transport management' expert Dinesh Mohan. He is a very unhappy man today. cng has created too many problems for him. It has come in the way of his grandiose plan to bring in low floor, specially designed, diesel-run urban buses.

Even in mid-June 2001, after all the mayhem on Delhi's roads in early April 2001, the Delhi government brought in an expensive, air conditioned low-floor diesel bus as a trial. This cost the state exchequer a staggering Rs 36 lakh as against Rs 16 lakh for a new cng bus. This too was done despite the express Supreme Court order in March-April 2001 that no more diesel buses will be registered in Delhi.

Dinesh Mohan has, as they say, in high society, an attitude. He loves to find problems with everything. However, attitudes apart, Dinesh Mohan has some good points to make. To epca he said with great emotions, that the move to cng would push Delhi's bus transport 20 years behind the times. Everybody is moving to low floor buses. Furthermore,

• Over 60 per cent of the passenger trips in Delhi are made by buses. We should promote the use of buses and get even more people into them.

• If the costs of public transport increase, people will switch to scooters. There will be even greater mayhem on the roads. Therefore, transport costs should be kept low.

When Agarwal, a member of the epca told Mohan, that while he agreed entirely with his suggestions on the improvement of public transport in Delhi, including the introduction of low floor buses, how could he reach the conclusion that cng buses should be stopped because they would increase the costs of public transport when he himself has pointed out that the minimum cost of a low floor bus would be at least twice more than a current diesel bus and over 1.5 times a cng bus?

"Well, we will have to tax private vehicles to subsidise public transport," said Mohan. "Then, can't the same be done to subsidise the capital cost of cng buses, where the overall increase in operational cost per kilometre is not more than 8 per cent?" pointed out Agarwal. " epca 's recommendations have already included concerns about improvement of public transport. The Supreme Court also wants to strengthen bus transport. In 1998, there were 6,000 buses. The court ordered an increase to 10,000, but in order to reduce pollution said that they should move to cng . Future induction of buses could be cng low-floor buses as long as the Delhi government is prepared to cross-subsidise them."

Mohan is a prestigious Henry Ford professor. He is too exalted to integrate or discuss integration.

But he is quite happy to take money for an anti- cng study from an anti- cng company. Indian Oil Corporation. Mohan has good supporters. R K Pachauri of teri writing in The Times of India says, "The recent study by iit Delhi clearly shows that the cng changeover as being implemented will actually increase certain forms of pollution. The cng zealots, of course, discount these findings because it was funded by Indian Oil, and, therefore, assume that it must have corrupted the professors who undertook the research."

For Mohan and Pachauri obviously there is no concept as 'conflict of interest'. As one us book on the role of industry-funded anti-climate change academics was titled, "Trust me! I am an expert."

But then what does Mohan say in his ioc study? He says that cng is not a better option than Euro II diesel buses running on 500 ppm sulphur. His conclusions are based on the traffic flow measurements at Vikas Marg, Nanak Pura and All India Institute of Medical Sciences (aiims) Crossing that show no major differences in total emissions due to changes in the present traffic mix assumed to have happened with the introduction of the high cost cng bus programme.

If indeed his assumptions are right, he could argue for subsiding the cng buses by taxing polluting vehicles like scooters and polluting fuels like diesel.

Other experts have already questioned Mohan's study. S A Dutta, scientist in the Central Pollution Control Board, says, "The study is not based on emission measurements. It is based on a model using traffic flow measurements at busy traffic locations. It is based on assumptions that do not hold much water." Media reports on the study were carefully carried on the day of the Supreme Court hearing on August 17, 2001. During the hearing, chief justice, A S Anand, stated, "Lobbies are at work and are trying to get their pound of flesh."


Like the mpng , teri suddenly became active in March 2001 arguing in favour of ulsd and against cng . At a time, when the entire transport system of the city was in disarray, teri 's alternative caught the imagination of the detractors of cng . What is ulsd ? It means ultra low sulphur diesel with about 10-30 ppm or 0.001 per cent to 0.003 per cent sulphur diesel. What is the advantage of ulsd ? By itself, it is a polluting fuel but because of the extremely low sulphur content a particulate trap can work efficiently which brings down particulate emissions almost close to cng .

But is it produced in India? "No." Will the mpng promise to produce it? "No way. Its not needed. It is too expensive. And just importing it for one city is logistically impossible." This is what the babus of mpng told epca . So how will we get ulsd ?

But does teri really want ulsd ? Only in public. Privately, just drop the 'U', lsd (500 ppm sulphur diesel on which no particulate trap can be used) is good enough. After all, its just a difference of a zero. The epca invited teri to present its views. teri cited, at length, a study conducted by the New York State department of environmental conservation along with Johnson and Matthey, manufacturers of continuously regenerating traps (crts), which show that emissions from diesel buses using 30 ppm sulphur (0.003 per cent sulphur) diesel with a particulate trap are comparable to cng buses.

Excellent. But then what was teri 's conclusion after citing this data? "Introduce new Euro II compliant diesel buses with diesel oxidation catalysts and 500 ppm sulphur diesel in case cng buses are not available in required number and timeframe." Only teri can explain how its presentation leads to this conclusion.

In August 2001, teri got into a spat with the Central Pollution Control Board when it released a study that the move to cng has not made any impact on the air quality as of yet and that its monitoring shows that the air quality has deteriorated after cng vehicles have come on the road.