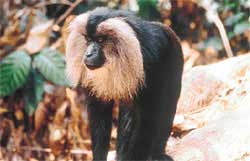 the lion-tailed macaque (Macaca silenus) enjoys a unique place among the Indian non-human primates. But it may not enjoy this distinction for long as it has been placed very high on the endangered species list in the World Conservation Union (IUCN) Red Data Book.

The international concern about its conservation is evident from the fact that Baltimore Zoo, Seattle Zoo, San Diego Zoo, Zoo Outreach Organisation and University of Mysore have already organised five international symposia devoted only to the lion-tailed macaque. The species is endemic to the Western Ghats and inhabits only the climax rainforest in the hills of Karnataka, Tamil Nadu and Kerala.

Present estimates put the lion-tail macaque population in their natural habitat at less than 4,000. However, a critical aspect concerning the conservation of the species is not their dwindling numbers but certain features of their habitat and some idiosyncratic behaviour patterns.
The macaque population has been divided into two large groups with habitats in the northern and southern Western Ghats. However, much of their rainforest habitat in the southern range has been fragmented because of human interference in the form of forest clearing for commercial plantations, water management in the hills and other less serious anthropogenic reasons. No other animal species is so typically an inhabitant of the climax rainforest as the lion-tailed macaque.

This monkey, therefore, is not only an indicator of the health of rainforests, its management in the fragmented habitats also makes it an umbrella species for the conservation of other wildlife species in the region.

Other Indian macaque species such as rhesus and bonnet are habitat generalists, have annual breeding cycles, attain early sexual maturity and hence, a high population turnover rate. Such a strategy in behavioural biology is referred to as R-strategy. On the other hand, the lion-tailed macaque is a habitat specialist, has a delayed sexual maturity, a long inter-birth interval, large home ranges and, hence, a low population turn over. This is referred to as K-strategy, which makes the macaque an interesting species for a theoretical understanding of behavioural evolution.
The lion-tailed macaque is primarily a frugivorous/insectivorous species whose diet includes more than 100 types of fruit of the rainforest. However, these monkeys do show flexibility in their diet often supplementing it with insects, lizards, frogs, birds and their nestling, and even several species of small mammals. An extreme example of such flexibility was demonstrated by a group of lion-tailed macaques inhabiting a highly degraded private forest near Valparai, Tamil Nadu. They started to feed on red coffee berries, a behaviour not observed anywhere else in this species.

The macaque is a typical arboreal species spending over 99 per cent of their time in the rainforest canopy. In some disturbed habitats where the canopy contiguity is lost due to logging of mature trees, the animals spend considerable time on the forest floor, which makes them vulnerable to terrestrial predators. In the canopy the macaque is sympatric (two populations that could breed but don't due to various differences) with the Nilgiri langur in the southern ranges of the Western Ghats. Studies on such sympatric groups have revealed that an excellent system of resource partitioning has developed between the two species. The lion-tailed macaques feed on fruit and insects in the upper canopy, and the Nilgiri langurs feed primarily on leaves and some fruit in the middle or lower canopy, thereby resulting in a vertical stratification in these sympatric species.

One of the most unusual features of the species' reproductive behaviour is a 'staccato' call emitted by the female which coincides with a rather conspicuous swelling of the skin near the females' sexual organs at the time of attaining sexual maturity. D G Lindburg of USA has proposed several hypotheses to explain these female calls. Could the function of these calls be an announcement of a female's sexual readiness and reproductive status to the males? Further, while in many species of primates, each sexual encounter results in ejaculation, lion-tailed macaques are characterised by a multiple-mount-to- jaculate (MME) system of mating. This sexual behaviour has not been explained satisfactorily so far.


Another unique feature of the monkeys' social behaviour, documented recently, is the migration of adult males between groups. On repeated counts of individuals in a group, one may find that whereas the number of individuals of other age-sex classes is found to be constant, the number of adult males often varies. Solitary adult male monkeys can be often found in the forest. These observations indicate that male migration could be a frequent phenomenon in this species. One such migration process was observed in a group where the researchers could identify each monkey. Normally, a group of social primates is extremely xenophobic and reacts violently to a stranger, especially a conspecific adult male. However, in macaques, not only do adult females tolerate the presence of a new adult male, they even prefer the migratory male over the resident male of the group in all their interactions.


This observation has strong implications for the management of this species. The group of macaques living in
forest fragments have been isolated from each other for several decades, and
hence, subjected to inbreeding and other evolutionary forces such as random genetic drift. Fragmentation has also skewed their normal demographic structure since there is no room for dispersal. If narrow corridors could be established through streams or hill slopes to link these fragments, inter- group male migration could become possible. If the fragments are far from each other and no possibility exists of corridors, the adult males could be exchanged among groups without the fear of xenophobic aggression. Either of the two management techniques could then facilitate gene flow among the groups and counteract the negative effects of breeding isolation.

Over the years, a number of areas in the Western Ghats with rainforests have been brought under the Protected Area Network. However, since a considerable percentage of macaque population still inhabits fragmented forests, the management of such fragments, coupled with the protection inside the networks, may ensure a secure future for this species.