Disappearing with the forest

Survival is not easy for an endangered species of gibbons when its habitat is being destroyed, says Kashmira Kakati

Disappearing with the forest 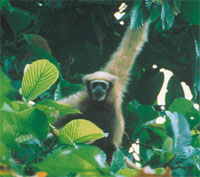 The hoolock gibbon (Hylobates hoolock) was once secure in its dense tropical monsoon forest habitat extending from the south of the Brahmaputra river in Assam to the Chindwin river in Myanmar. Not very long ago, these forests would have echoed with its spectacular call, the music to an awesome war dance in the high canopy of the rainforest. A song that seems to come from centuries ago -- a series of whoops, hoots and tones rising in a crescendo ringing through the tropical jungle in a riotous, primitive deluge. A song from times when trees and vines tangled in impenetrable profusion, when silence reigned like an unquestionable truth. When only the birds sang to the silence. And the gibbon sang to life.

But now, unable to adapt to changes, the hoolock teeters precariously on the edge of extinction as its forest homes vanish and hunting takes a heavy toll.

Of the nine species of the fascinating lesser apes of South Asia and Southeast Asia, the highly endangered hoolock is the only one found on the Indian subcontinent. North-eastern India and Myanmar hold the majority of the wild population of hoolock gibbons, numbering approximately 100,000, while small populations of 100 to 200 gibbons survive in parts of Bangladesh and China. Among the higher primates (which is the group 'apes' and includes humans, chimpanzees, gorillas and orangutans), only gibbons pair monogamously for life. Each pair and their two to three young ones live in exclusive territories, which they defend by calls, displays and the occasional encounter with neighbours. The elaborate duet calls of the male and female are also believed to play a role in maintaining the bond. Every two years, the female gives birth to one offspring, which stays with the parents till it attains adulthood at 6-8 years of age. Subsequently, it moves away, finds a mate and establishes a new territory.

The most easily noticed physical characteristics of gibbons are the lack of a tail and their extra long arms. The long arms aid in brachiation -- their distinctive swinging, hand-over-hand mode of locomotion. The adult male hoolock is black in colour with prominent white eyebrows, which is why hoolocks are also known as white-browed gibbons. The female's coat is also black until sexual maturity, when it transforms entirely to a golden brown. The life span of the hoolock gibbon is not reliably known, but other species of gibbons are known to live up to 25 years in the wild.

It has taken ten million years to perfect the unique characteristics that enable the gibbon to rule undisputed at the dizzy heights of the tropical forest. But as the forest recedes due to the human onslaught, these very characteristics -- arboreal life, a diet based on fruits, a strong sense of territory and monogamy -- have become its greatest handicaps. Defenceless on the ground, denied its wild fruit diet, unable to crowd into the remaining forests and incapable of multiplying rapidly, it now looks as though the hoolock gibbon is singing its last lonely songs.
In the 5-sq km Borajan Reserve Forest in the Tinsukia district of Assam, a few hoolock gibbon groups live in this shadow zone between survival and extinction. Borajan, a remnant tropical semi-evergreen forest, is hemmed in by tea estates and cultivation on all sides and has a forest village right in the centre. Eaten away by illegal felling of trees, all that remains are a few stands of trees in a desolate expanse of rotting tree stumps and weeds. Here, the hoolock struggles for survival against the most unfair odds.

I followed these beautiful animals for six months, for a peek into their hidden lives. Just before dawn, I would stake out the tree where a gibbon family had slept the previous night and wait for them to wake with the Sun. In the grey darkness of this bewitched hour, the forest looked almost indestructible. Almost, because with daylight would emerge the grim reality of destruction.

In undisturbed forests, gibbons require an area of about 35 hectares (ha) on an average to find all the resources necessary for them to survive and reproduce successfully. In Borajan, however, the groups are being forced into ranges way below optimal.

One gibbon family had a home range of only seven ha. Fruits were so rare that they had to depend heavily on leaves for food. Another pair of gibbons lived in an adjacent territory of a mere four ha, where just one fig tree was the main source of food for four months. Primates can survive short crunch periods of low food availability by switching to alternative diets. But extended periods of scarcity, as in Borajan, severely test their capacity to endure nutritional stress. It is well known that food stress makes animals vulnerable to disease and predators, and hampers reproductive capacity, a prospect especially disturbing for small populations that cannot recover easily from losses.


The fact that hoolock gibbons are extremely picky about what they eat and feed on only a handful of species aggravates the matter. Every felled tree means either a precious food source is gone or that one of their canopy pathways has been severed. In Borajan, an entire portion of one family's home range became inaccessible via the canopy because a single connecting tree was felled.

There were times when, forced by hunger, they had to descend to the ground and rush fearfully across the decaying undergrowth to reach a food tree. Particularly sad to watch, because it was the antithesis of the wild and free spirits that often held me spell-bound as they sped through the treetops, swinging and leaping with splendid abandon.

In a few nearby forest fragments, only slightly smaller than Borajan, the last hoolocks have died out in the past decade or two. Time seems to be running out. Forest fragments like Borajan are important for conservation because they are refuges for the substantial population of hoolocks and other wildlife outside protected areas. Small but precious repositories of genes, these fragments act as buffers against sudden epidemics that may strike a larger population concentrated in one large protected area.

Precisely because of their small size, these fragments should be easier to protect and manage. Reforesting degraded areas with the original complement of tree species becomes a feasible option. An increase in suitable habitat will allow the gibbons to reclaim their original home ranges and, more importantly, allow space for young adults to establish their own territories. The forest department, with information collected on preferred food plant species from undisturbed forests, can plant these to enrich the habitat and offset shortages.

Eventually, it is the people who will have to comprehend what amazing riches their land has been blessed with. In Assam, nursery children have long been reciting this rhyme: " Holou uthil tokou gosot, koril khodou modou ..." (the hoolock climbs the Livistonia tree, creates a big hullabaloo...). In generations to come, will the children know what they sing about? In this besieged land, it will be a sad day when the hoolock gibbon calls no more. The wonder will be gone, the silences empty, and never again will the glorious song ring across the skies, touching our souls, deep and unforgettable.

The author is working on a Ph D entitled "The impact of forest fragmentation on the hoolock gibbon in North-east India" from Cambridge University, UK