Kumaon villagers discover that gods are the best forest guards 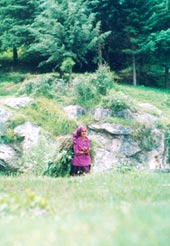 Dharamgarh in the Kumaon area of Uttaranchal has a long tradition of people's management of forests. Since 1931, a van panchayat had been doing a remarkable job. The association of these forests with various local deities ensured that local community institutions were helped along on their job. However, with increasing population and depleting resources, forests, divine associations notwithstanding, faced the axe. This largely agrarian area is heavily dependent on the forests. And by the beginning of the 1980s, the situation was so bad that people, especially women, had to trek miles to collect small quantities fodder or fuelwood.

"We realised it was time to back to the protection of devi Kokilamata -- the goddess of justice -- and we offered an entire village forest of about 100 hectares (ha) to her for a period of five years in 1995," says Basant Ballabh Pathak, sarpanch (headperson), Majeda van panchayat, Bageshwar district. Once a van panchayat comes to such a decision and a forest is declared sacred, villagers will not dare encroach upon the devi's forest.

When the five years were up, the village decided to repeat the process in 2000. Parvati Devi, a young ward member, says, "We saw the benefits of this decision clearly, thus the extension." And these tangible benefits are the major driving force behind this neo-sacred movement that began in 1982. That year, the people of Jakhani village in the then Almora district decided to offer their forest to the local goddess. "Our own people would not listen to us, and harmed the forests. Dev-vans are an ancient tradition, albeit forgotten. We decided to revive it to save our forests," recalls Hayat Singh, 78. With one village setting an example for another, so far about 70 van panchayats have declared their forests 'sacred'. "We followed the example set-up by the people of Simgarhi village, and at least three villages: Padhyuda, Gokhari and Jalmani followed ours," says Pathak.

He explains the need for this step, "We had no option. We tried appointing chowkidars (patrolpersons). Then we asked our own people to take turns patrolling the forest. But nothing succeeded." Now, fear of the goddess works as an effective deterrent. Cutting green leaves and green trees is not allowed. However, grazing is allowed, and people are allowed to collect fallen twigs and leaves. "No more headaches for me. The devi will punish all those who violate the rules," says Pathak. He echoes the sentiments of many a sarpanch today.

The increased availability of biomass is one of the tangible benefits of the villagers' initiative. "Fodder, fuelwood, leaf-litter and animal bedding are not a problem anymore. Earlier, we hardly got anything from the forest," says Kishuni Devi. They cannot rely on forests for timber, though. "We get timber from the reserve forests as we have usufruct rights there," says Parvati Devi. Water availability is also better now.

So far, so good. But the current forest leadership is idle, and community management is almost non-operational. Forests cannot be offered to the devi indefinitely. And this raises the question: what next? Van panchayats are now looking at the state for support. A number of them are opting for joint forest management (jfm). All but one van panchayat on the Pithoragarh side of Dharamgarh, previously looking after 'sacred forests', have opted for jfm. Narayan Ram, sarpanch of Lohathal, defends the shift to jfm, " It was necessary. People get employment, and forests are protected." Others, however, do not agree. "We didn't even know when he got the project. And he plans to build a huge wall around the entire 800-ha forest. How is this possible? We fear that the forest department might encroach upon our forest," says Basanti Ama, a resident of the village.

The ingress of the state in peoples' forests has put a question mark over community ownership and autonomy of the resources, and led to a division among villages. Older van panchayats are being divided into unsustainable smaller ones. These small van panchayats are looking at jfm as the answer. Ram Singh, sarpanch of the Lamjhigada van panchayat, formed in 2001 with just 1.5 ha of forest land, says, "I got information about jfm quite late, and then the forest department said no funds were available. But since the government pressurised us into forming van panchayats, they should give funds as well. It seems like life in Dharamgarh has turned a full circle. It is the lure of money, and not the van devis and devas, that calls the shots now.