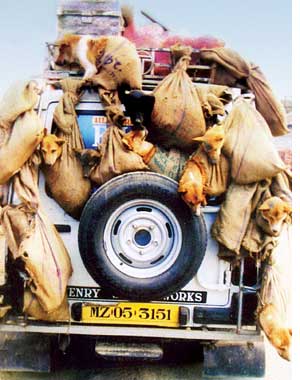 In Mizoram and Nagaland dog meat is as regular as chicken and mutton, but activists want it outlawed

Four pm there is an extra buzz in Dimapur's usually bustling main market. It's Wednesday, the day when traders in Nagaland's biggest city take their wares out on the streets. Colourfully attired women sit beside sacks resplendent with chilli powder, mechinga leaves and other condiments. A nearby stall is crowded with wicker baskets. Another corner is lush with okra, squash and a variety of leafy vegetables. Business at the beauty parlour is brisk and utensils scratch in a furious symphony as the corn salad seller tries to mix ingredients in right proportions. At another corner, worms wriggle about on a blanket. Cuts of dog meat peek out from small plastic tubs at another stall.

"Dog meat is a favourite among almost every tribe in Nagaland. I have been selling it for more than 15 years," said Nengning owner of this stall.Caisii Mao who came to buy dog meat joined the conversation. "I am a regular at this shop," he said. "Once every week, my family gathers around the dinner table to eat dog meat seasoned with raja mirchi (a chilli variety grown in India's northeast)."

Nengning's is not the only dog meat shop in the market. "There are more than 20 of us here," she said and added that "a kg of dog meat sells for Rs 180". She and her fellow dog meat sellers make about Rs 1,500 a week.

Business is even better for Nengning's compatriots in neighbouring Mizoram. "Dog meat sells for Rs 200 a kg. Smoked meat is a little more expensive. It costs Rs 220," said Paiswa whose uisa dawa-- dog meat shop--is sandwiched between a clothes store and a shop selling electronics goods, mostly made in China. "We make around Rs 2,000 a week," Paiswa said.

The state's chapter of the animal rights group People for Animals reckons that there are more than 20 uisa dawa s in Aizawl--a real cause for concern for its activists. Sangita Goswami who heads the organization's Assam chapter said, "In January 2008, the ruling Mizoram National Front (mnf) promised us dog meat shops would be banned. But the party went back on its word," she said. According to Goswami, people in Mizoram and Nagaland consume dog meat "under the foolish belief that it increases sexual potency".


Davo Mao from Kohima disagreed. "Dog meat curry is relished for its punchy taste," he said. He, however, said, "We believe that dog meat is more nutritious."

Malika Sharma, a dietician at the gnrc hospital in Guwahati, Assam, said this local belief is not totally unfounded. "Dog meat has a warm character. It can supplement the marrow and help blood circulation," she said. Birinchi Kumar Medhi, who heads Guwahati University's anthropology department, finds a cultural reason for the culinary preference. "Most tribes in Mizoram and Nagaland are of the Mongoloid stock. They share ancestry with people in China, Korea and Vietnam for whom dog meat is almost a staple," he said. "People of Mongoloid stock are known to have less iron in their blood. Dog meat has more iron content than other meat. This could be one reason people of Mongoloid stock prefer it," said Mineshwar Hazarika, associate professor at the College of Veterinary Science, Assam.

Pranita Devi, a surgeon with Assam's veterinary department, said such claims are unsubstantiated. "There has been no study on the benefits of dog meat," she said.


Animal rights activists do not hold any brief for such arguments. Goswami contended, "Dogs are not consumed anywhere in the country except Mizoram and Nagaland. Those killing dogs should be prosecuted under the Prevention of Cruelty to Animals Act, 1960. " Pankaj Pratim Dutta, advocate at the Guwahati High Court, argued that the animal rights activists are unnecessarily targeting the dog meat business. "According to the Prevention of Cruelty to Animals Act, 1960, killing any animal without using the proper methods is a punishable offence. But many butchers don't follow procedures while slaughtering goats. Why don't the animal rights activists raise their voice against them?" he asked (see box The correct procedure).

Activists say it's not just the slaughtering methods that are in question. They point to a smuggling racket. According to Goswami, about 150-200 dogs are smuggled every week into Nagaland and Mizoram from Meghalaya and Assam. "This is illegal under the Prevention of Cruelty to Animals Act," she said. She recollected that in 2007, activists of her organization rescued about 40 dogs from smugglers at Lailapur on the Assam-Meghalaya border. People for Animals' activists also rescued 80 animals in Assam's Nagaon district the same year. Phaguna Sangma, one of the smugglers caught on that occasion, confessed "We pay Rs 50 each to local youngsters to catch dogs. Each dog sells for Rs 1,000." A young dog smuggler from Nagaon admitted, "we do catch dogs to earn a quick buck but never realized that it's a punishable offence."

Lucy Vanlalruati Hmar who represents the Mizoram chapter of People for Animals argued laws are not stringent enough. She pointed out that Sangma who was caught smuggling dogs in Nagaon was fined Rs 50 and set free.

"The veterinary department has only one official to look into cases of cruelty against animals. He is burdened with other responsibilities and has little time," said Goswami. Her organization conducted a survey in 2008. "The number of strays in Assam decreased from over 23,000 in 2002 to less than 14,000 in 2007," she said. This is due to smuggling of dogs to Nagaland and Mizoram, Goswami added.

Dog meat lover Caisii Mao does not understand the fuss. "It's just another food item for us. Don't people in other parts of the country consume mutton and poultry?" he asked".