Safety regulations are for imported toys only 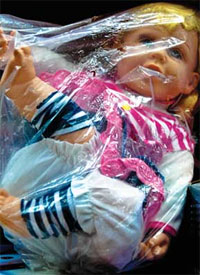 India faces a challenge: how to keep alive its only measure ensuring safety of imported toys. Its ban on import of toys not meeting specified safety standards lapses on January 23. Since Indian toy makers are not required to adhere to any mandatory safety standards it will be discriminatory to impose them on others; it would be a non-tariff trade barrier. One way is to put in place mandatory standards for domestic manufacturers but that is yet to be done.

It goes to show how serious the government is about toxicity in toys.

The ban was imposed last year and at the time applied only to China. Following worldwide concerns over the toxicity in Chinese toys, the directorate general of foreign trade under the department of commerce banned import of Chinese toys in January 2009 for six months, including wheeled toys and dolls. Soon it realized it cannot continue with the ban. In March it announced import of Chinese toys which conformed to international or Indian standards would be permitted.


Conforming means the toy importer has to ensure two things. One, it has to produce a third party certificate that imported toys meet standards prescribed by astm International under the Standard Consumer Specification for Toy Safety meant to prevent injuries from choking, sharp edges and other potential hazards, including those from chemicals like lead. astm International is one of the world’s largest voluntary standards development organizations and has members from over 100 countries. Else, the importer can show the toys conform to the safety standards prescribed by India or the International Organization for Standardization. All three standards are similar, but they do not cover phthalates.

Two, the manufacturer should have a certificate stating that a representative sample of the toys being imported has been tested by an independent laboratory accredited to the International Laboratory Accreditation Cooperation (ilac)-Mutual Recognition Arrangement and found to meet the required specifications. ilac is a network of laboratory and inspection accreditation bodies formed to remove technical barriers to trade. It has 66 members, including India’s National Accreditation Board for Testing and Calibration Laboratories.

Indian customs officials only check whether importers have the required document, said a customs official requesting not to be named. There is no regular testing done by the Indian authorities to confirm whether the imported toys meet the specified standard or not.

A source in the commerce department admitted the import requirements are discriminatory and the department is likely to withdraw them if China mounts more pressure. “We are biding time hoping the government would mandate standards for the domestic industry as well,” he said.

The commerce department is looking to the department of industrial policy and promotion (dipp), the nodal department for toys, to issue a quality control order making toy safety standards mandatory. Once that happens both domestic and foreign manufacturers would be have to adhere to them.

Even if the quality control order was formulated it would not have covered standards for phthalates because the Bureau of Indian Standards (bis) is not ready with them. Officials at bis say the standards are not a priority for the agency because it is preoccupied with other tasks.

In 2007, Consumer Welfare Association, a non-profit in Mumbai, had filed a public-interest petition in the Bombay High Court, seeking a ban on the import of toys made in China on the ground that they are toxic. “Our main idea was to wake up the government,” said A M Mascarenhas, secretary to the association.

The court has directed the government to file a report detailing interim measures taken to curb imports of toxic Chinese toys, informed Rajiv Chavan, the counsel for the ngo. At the last hearing on December 2, 2009, the court asked the government to submit a report on toxicity of toys.

The study is likely to be completed in 8-10 months, said a scientist involved in the study.