Scientists are flocking to Umri village in Allahabad district to study the reason it has so many twins. But ALOK GUPTA unravels the twin troubles its residents face

“What do you want from us? Blood, saliva or data?” People confronted me as soon as I entered Mohammadpur Umri.

As I mumbled an answer, an elderly person put his hands on my shoulders, as if in apology.

Introducing himself as Acchan Mian, he explained the hostile reaction. “The village abounds with twins and many medical teams have visited our village in the past five years to find out about the high birth rates of twins. Now people get irritated.”

“From Singapore to Hyderabad, research teams are trying to decipher the mystery behind the unusually high birth rate of identical twins in the village,” Dishan said. His father had a simple explanation. “It’s Allah’s (God’s) wish,” Acchan Mian said with a bemused look. Ishan was back with the glass of water by now. He told me about scientists visiting the village for blood, saliva, water and soil samples. “One even requested for semen samples from the villagers,” Ishan added.

The twins feel irritated. “We have cooperated with the research teams, but every year, a new scientist lands in our village.”

Some research teams pay the twins well. But Acchan Mian’s sons said there were times when villagers were subjected to rumours and prank calls. Once the twins were informed about a team, which was ready to pay Rs 1,000 to those willing to be a part of the research work. Around 85 twins reached the place and waited for hours only to realise it was a prank call.

“That was nothing,” shouted a middle- aged person who joined the conversation. “Last year, people received a call informing them the government has sanctioned one crore rupees for the ‘victim twins’ and families could collect the money from the district magistrate’s office,” he said.

Acchan Mian introduced him as Guddu and went on to complete the story: “The village was ready to visit the district magistrate’s (DM) office. We called up the DM to confirm and found it was also a prank.”

Guddu narrated me another story. “Last year, a hen had laid eggs. I cracked it and found two yolks. A few days later, scientists from Hyderabad came looking for eggs with two yolks,” he said. Guddu handed over a few eggs to the curious scientists. The twins miracle seemed to have touched animals too. A middleaged person whom Guddu addressed as Mustafa Sahib said a few years ago three of his cows had given birth to identical twins. 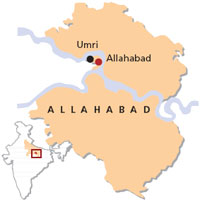 There are 120 twins living in this village of 2,500 families. The village does not even have basic medical amenities. Acchan Mian told me about the high death rates of mothers and new born twins. When I searched for data, there was none.

Acchan Mian led me to the house of one Shahnaz Begum who had twin daughters Shama and Mahimuma. Shahnaz’s eyes turned moist as she narrated how Shama died while giving birth to twins. The grandmother had to bring up Shama’s twin sons. “This was the most difficult time in my life. How could I provide mother’s milk to two infants?” she asked.

Acchan Mian added that bringing up twins is difficult for parents. “They fall sick together, cry together and parents have a harrowing time. “Medical expenses are also high,” he said. Mothers have managed to raise twins so far with the help of traditional medical knowledge.

Mohammed Mustafa’s face turned red with anger while narrating how he lost one of his twin grandchildren a few years ago. The child had high fever and there was no medical help at hand. Mustafa said even cattle have suffered because of poor health infrastructure. Till five years ago, he had more than 20 cows in his dairy. Three calves died just after weeks of giving birth to twins. “I ran from pillar to post to get help from veterinary doctors. I had to pay the vets a hefty sum, but they could not save the animals.”

The deaths of his grandchild and animals have shattered Mustafa completely, Acchan Mian said.

Today, Mustafa trades in milk he buys from small cow owners and sells it in the market. The residents depend on watermelon farming or odd jobs for survival. They also have to put up with bad roads and lack of water supply. As I was leaving, Shahnaz made a plea, “Maybe you could tell important people about our situation. We urgently need a doctor.”