Down with the dump

Down with the dump 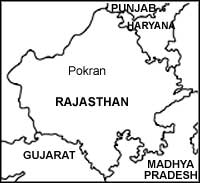 in march 1997 when the heavy drilling machines ploughed into the barren land of the desert village Sanawada, just a few kilometres from India's nuclear weapons testing site, Pokran, officials of the public sector Mineral Exploration Corporation Ltd ( mecl ) told the residents, "There are precious stones beneath the village." (Granite, experts say, is the cheapest stone -- sometimes even cheaper than bricks).

For the residents of Sanawada, situated on a one-km thick strata of granite, it was amusing news. "We didn't know that granite could make good money," says Roop Singh, a resident of the village who permitted drilling on his land.

For two years the drilling operations continued and thousands of samples of granite were collected. But, these samples had an unusual destination: the Bhabha Atomic Research Centre ( barc ) at Trombay, not the usual mecl headquarters in Nagpur. Little did the people of the area realise that the foundations were being laid for India's first nuclear waste dumping site. However, a campaign by the local people has put a halt to the drilling.

It was in August, 1999 that the government of India declared that the country's nuclear waste would be deposited in parts of Rajasthan and Madhya Pradesh's granite belts. Though, initially it was difficult to link the government's declaration and the drilling for 'granite', a secret agreement between mecl and barc ( that some anti-nuclear activists stumbled upon) spilt the beans. After several failures, barc selected Sanawada village as the 'most suitable' place for setting up a laboratory in preparation for the site which would be used to store nuclear waste from the various nuclear units.

Anti-nuclear activists and environmentalists, who had access to the secret agreement between barc and mecl, alerted the villagers about the real intention behind the drillings. The residents of the area realised they were being hoodwinked by barc even though a nuclear waste dumping site is considered a civilian nuclear activity and news of its setting up should have been made public. Ironically, the incident took place in a state that recently gave its citizens the right to information. Even the state chief minister was ignorant about the activity and only came to know about it from a group of activists who called on him.

Now the residents have teamed up with anti-nuclear activists and environmentalists to form the Gram Vikas Sanstha to fight barc' s misinformation campaign and to stop its activities in the village till all details are given to the community and independent scientists for scrutiny.

"For years we supported the nuclear tests and other activities on our land in the interest of the country. This time we will fight for the right to know what the government is doing, as it involves our health and our environment," says Ugum Singh, a local teacher. "Until now we have been using persuasion and have asked barc to make public its plans. In future, the tone might change," says Jag Mal, another villager whose land was used for drilling. barc is yet to come out with any statement on the controversy.
The drilling was actually meant for barc 's Fuel Reprocessing and Nuclear Waste Management wing to collect samples of granite to study its heat resistant and hydrological characters. The rocks had to withstand the high temperatures of radioactive waste and the area should have no groundwater source as there is a threat of contamination by the waste. In the early 1990s, barc selected an abandoned gold mine in Karnataka's Kolar Gold Field, one of the deepest mines in the world. It even set up a laboratory to simulate the high temperature conditions which will be generated by the wastes. But due to the presence of water, the site had to be abandoned. Gujarat, Madhya Pradesh and Karnataka were removed from the list of likely sites for various reasons. In 1995, barc began a survey of 256 sq km in Pokran.

"The second phase of the drilling, in fact, meant approval of the site. After drilling for 150 metres the rocks must have been found suitable and mecl gave the go-ahead for the next phase of drilling," says Sanghamitra Gadekar, a renowned anti-nuclear activist who is currently conducting a health survey in villages near the testing sites.


India needs a site to store the nuclear wastes generated by its vast establishment (see box: Untouchable ) but the problem is that no country in the world has found a totally foolproof way to keep the deadly waste buried safely.

Ramana says that there are three principal difficulties with a nuclear waste dumping site:

- It is likely that radioactivity will leak from canisters containing the waste.

- Monitoring and predicting the performance of the site over very long periods of time is extremely difficult.

- It is essentially impossible to guarantee that there will not be inadvertent or deliberate human intrusion over the hundreds of thousands of years that the waste will remain radioactive. These sites have to be guarded from human contact for millions of years.

"Given this background, the decision to dig up a site should not be unilateral but approved by the entire community," says Bimal of the National Alliance of People's Movement which is co-ordinating the movement against the Sanawada drilling operation. " dae needs to clearly state the criteria they would use for site selection, then justify the site they select as per those criteria. Next, they should allow time for independent organisations to scrutinise it. It is only through a process where many independent minds exercise themselves that we are likely to get the best site for storing these deadly poisons," says Surendra Gadekar of Anumukti, an non-governmental organisation of Gujarat. "It's not about national interest but about people's interest", says Manohar Joshi, a Pokran-based anti-nuclear activist.

Since the first nuclear test in 1974 there has been a constant demand to make public all the health surveys conducted by the department of Atomic Energy in its different establishments. The Government doesn't even make public the health and radiation data in civilian nuclear facilities like power plants. Says a scientist in the atomic energy department: "In India there is no distinction between civilian and military nuclear programmes."

While the Sanawada controversy was raging in March, the aerb was stripped of its power to monitor barc . Though the government said it was a 'bifurcation of civilian and military establishments', the reality is very different. Now barc controls 80 per cent of India's nuclear establishments and aerb has little authority over it. As spent fuels from power plants are reprocessed for weapon grade plutonium, barc would eventually exclude plants from aerb purview. This would exclude almost every facility from civilian view. "We know that there is a systematic attempt to curtail the flow of information, but we are determined to fight it," says Kavita Srivastava of pucl, Jaipur, who is also leading the movement against the Sanawada drilling.

The noise of the drilling may have died down but its echo can still be heard off the granite stone in the area. Meanwhile, the search for a site carries on and until one is found, nuclear waste will remain in temporary sites posing a threat to human life in the areas.