...are the local wetlands in Assam on account of short-sighted flood control measures and unsavoury fishing practices 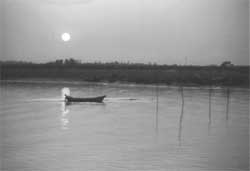 february 1, 1997, was celebrated world-wide as the World Wetlands Day. The World Wide Fund for Nature even issued a statement asking governments to reaffirm their commitment to conservation and restoration of wetlands throughtout the world. However, for the numerous waterbodies, fringed frequently by marshy wetlands, and scattered amidst the villages, tea gardens and forests of Assam, their seems to be no respite as continuing degradation takes its toll. Locally known as beels , these wetlands extending over anything from a few sq km to nearly a hundred, are home not only to numerous water fowls, both resident and migratory, but are also the breeding grounds for several species of fish, including the bigger riverine varieties. Unfortunately, Assam's wetlands are often overlooked, perhaps due to other attractions like the one-horned rhinos inhabiting its national parks, or because of their abundance. It is only now that scientists from the Assam Remote Sensing Application Centre have undertaken a satellite survey to identify and map the wetlands.

Not many are aware that many of these unique waterbodies and the aquatic resources they harbour are gravely endangered and some are on the verge of extinction. To understand the implications, it is necessary to understand the diverse ecology of the beels and the intimate link they have with the biology and breeding behaviour of fish, including the riverine species.

For years, the piscifauna of Assam have regularly spawned, hatched and grown in the beels before returning to the rivers. As a result, fish, both riverine and lentic, were abundant in Assam. In recent years, however, there has been a decline in the population and diversity of the fishes in the beels . Several factors have contributed to this, but the primary reason is the drastic change in the ecology of the beels .
Degradation of the beels reflect the government's piecemeal approach to problem-solving and exemplify the disasters created by the lack of foresight and integrated planning. The degradation of the beels and the threat to the aquatic creatures started with government measures for flood control several years ago. All along the Brahmaputra and her tributaries, sluice gates were constructed to prevent floodwaters from entering the natural canals and waterways and inundating agricultural fields and village settlements. These sluice gates also regulate the volume of water entering the beels . With restricted access to breeding and spawning grounds, riverine species are thus deprived of high quality spawning and feeding habitats.

They thus have to settle for other spawning areas, however unsuitable. This takes a heavy toll on the frys and fingerlings, as mortality increases due to improper shelter and 'escape' nooks, with the tiny fish often falling prey to swift currents and eddies, predators and fishing.

The construction of the sluice gates and resultant regulation of water inflow into the beels has resulted in restricted or reduced entry of gravid females, consequently preventing restocking of the beels to previous levels. Disregard to traditional (and legal) fishing norms also takes its toll -- primary among these is the largescale, unethical 'hook fishing' of the gravid females at the river edges where they come to spawn. Frys and fingerlings also fall prey to net fishing. This criminal extermination of frys and fingerlings further adds to the decline in population, especially of potential egg-laying adults and thus prevents restocking of the riverine fish resources. The immediate impact has been a reduction of the fish stock in the beels and thus, a reduced breeding (and therefore genetic) stock.

The beels of Assam also support a large fishing community, whose livelihood depends solely on these water bodies. The fisherfolk have noticed the declining trend of fish resources, but market and economic pressures and their own pathetic socio-economic conditions make them party to the ongoing genocide.


The beels are also being auctioned at high rates by the fisheries department to contractors, with annual incremental increases of 15-20 per cent, for periods varying from three to five years. The contractors or mahajans sub-lease the contract or engage fisherfolk on a 60:40 sharing basis. The contractors or sub-contractors pay for expenses incurred (tax, boats, nets and diesel), while labour and food is contributed by the fisherfolk. As they become partners to the fishing contract (however unequal), the fisherfolk adopt a mercenary attitude towards the whole operation, in order to increase their income though they realise that the fishing methods are unsustainable and spell disaster, not only for the beel but also for the aquafauna and, in the long run, for themselves.

With the onset of floodwaters, the fisherfolk lay traps at the mouths of the waterways and canals, indiscriminately catching gravid females, juveniles and adults. This is done at the entrance of the upstreams as well, by trapping gravid females migrating through the beels to the streams in the adjoining hills. Fishing continues during the monsoons, giving little respite to the fish in the beels . As the flood waters recede, the fisherfolk throw in certain tree branches in the beels, which attract the remaining fish who then congregate nearby. As the flood waters recede further, the channels leading to the rivers get cut off, or are deliberately closed to prevent the fish from leaving, thus effectively trapping all the fish within the beels .

At this stage, the mahajan supplies the fisherfolk with diesel pumps to drain the smaller beels completely of their water. The fish are then netted by the fisherfolk and when the beels are practically dry, the fish are picked out by hand. With the waters drained, the macrophytes and slush are allowed to dry. Given the right conditions, the dried macrophytes are burned and the beel beds and surroundings are converted to seasonal agriculture fields.

The harvest is good, given the rich organic matter that remains on the beds. The crops are harvested in spring, just prior to the inflow of river waters.

As the waters flow in, the cycle starts afresh; this cycle has prevailed for some years now. The casualty has been the aquatic resources of these wetlands. The calamity has been extended to the rivers, for in addition to the adult fish being harvested, the seasonal transformation of the habitat has meant the extermination of eggs and frys, effectively ensuring the absence of any riverine recruitment of aquafauna. Without regulations and immediate measures to curb such practices, Assam's rich fish resources may well become a thing of the past. Already, several species have become rare, verging on extinction. Turtles and tortoises, once common in the beels , have totally disappeared -- not because they have been hunted and trapped out of existence, but because their old habitat itself has become inhospitable following the indiscriminate destruction of the beels .

People in Assam, as in the other north-eastern states, are basically fish-eaters: fresh, smoked, roasted, grilled or dry fish form staple food and delicacies. A decade ago, fish of all sizes, hues and varieties were common in the markets of Assam, harvested from the beels or rivers. Now, it is increasingly becoming difficult to procure these fish while some have become rare commodities. Although this disturbing trend has grown and continues over several years, no alarm or concern has surfaced yet; popularly or in the administration, in Assam or elsewhere. A reason for the complacency could be a false sense of abundance imparted by the flood of cultured fish, especially the imcs (Indian major carps) promoted by the fisheries departments. The scientific community is aware of the fish depletion and the threat to their habitats. Its awareness, however, is yet to be transmitted to the powers that be, and yet to be transformed into effective action.

Ranjana Sinha is from St Mary's College, Meghalaya and Dhrupad Choudhury is the head of the Nagaland centre of g b Pant Institute of Himalayan environment and development