The institution that administers Centre’s rural development programmes—the District Rural Development Agency (DRDA)—may be wound up. A committee set up by the Ministry of Rural Development (MoRD) last year to restructure this key institution has recommended abolition of DRDA. The committee finds that DRDA is in direct conflict with the Constitutional mandate for panchayats, which are increasingly being assigned the responsibility of implementing rural development programmes. Moreover, DRDA has not been effective in achieving its original objective of giving expertise support to state departments that implement rural development programmes. “We have proposed a transition from DRDA system that has failed to live up to its original objectives,” says V Ramachandran, chairperson of the committee and an expert on local governance. 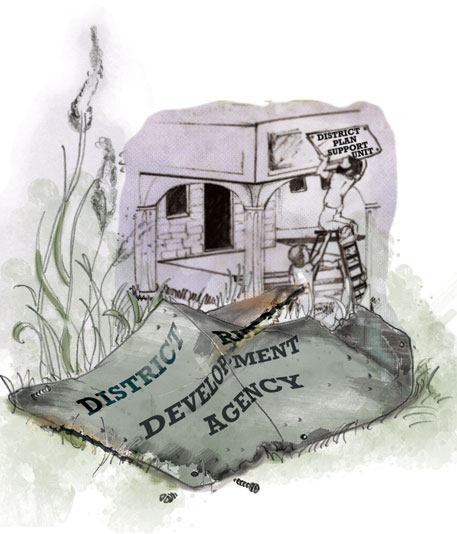 In March-end, MoRD circulated the committee report to state secretaries in-charge of rural affairs for comments. Most states have supported the move. But because the transition needs extra financial allocation, the go-ahead has to come from the Ministry of Finance and the Planning Commission.

This is not the first time that a high-level committee has recommended the abolition of DRDA. Three such committees, besides the second Administrative Reforms Commission, had suggested evaluation, and even abolition, of DRDA (see ‘Chequered past’, p21). “There is no doubt that DRDA must be abolished. But whether MoRD will accept this recommendation is doubtful,” says Rajesh Tandon, an expert on local governance. “History is witness to this.”

The Centre established DRDA in 1980 as a body of professionals to plan, monitor and evaluate its rural development programmes. Technically, being a registered society, it is independent of the Central and state governments. But in the first decade of its existence, concerns revolved around the agency’s drift from its key objectives.

In the past three decades, instead of being a plan support body, DRDA has emerged as more of an implementing agency for Central schemes. There are 600-odd DRDAs across the country, implementing close to 50 programmes, worth Rs 70,000 crore a year.

In 1992, the Panchayati Raj Act pitted it against the Constitution by giving local elected bodies power over functions that DRDA manages. That put a question mark on its existence. “DRDA is a pre-panchayat era body. With the Constitutional amendments, it has become untenable and violates Constitutional norms,” says George Mathew of the Institute of Social Sciences in Delhi. In the late 1990s, following a ministry circular, a few states merged DRDAs with their district panchayats. But they continue to exist in other states in violation of the Constitution.

In 2008, the ministry ordered the states again to make DRDAs accountable to district panchayats. But the states showed little interest. For, they had already assigned their own programmes to DRDA for implementation. After all, it saves them administrative cost as the Central government bears it.

“DRDA has been a temporary place for (state) government officials for 32 years,” says S M Vijayanandan, principal secretary of Kerala who is in charge of local governance. The state has merged DRDAs with district panchayats. “There is lack of professional expertise in the body, impacting effective implementation of rural programmes. This calls for a rethink,” says Vijayanandan.

Besides, in the past five years the rural development budget has more than doubled, putting pressure on the ministry to take up immediate reforms in DRDA for effective implementation.

Reforms on the anvil

The latest MoRD committee report, which comes after a year of consultations with state governments, suggests a professional body, called the District Plan Support Unit (DPSU), in place of DRDA that will remain accountable to district panchayats. The committee also suggests reviving the District Planning Committee (DPC), a Constitutional body that consists of panchayat members, to look after district-level planning. DPC consolidates plans of village panchayats into a district perspective plan that becomes the template for economic and social development of the district.

“We have put back the panchayat bodies into their Constitutional function,” says Ramachandran. In the new district-level rural programme system, DPC will be at the core. With experienced development professionals as staff, DPSU will act as the “technical secretariat” for DPC.

It will not implement programmes but help evolve, monitor and evaluate rural programmes. Respective government departments will implement the programmes. The MoRD committee report suggests that the new unit should hire development professionals selected from the government staff pool. This was suggested because the committee has made provision for an anti-poverty sub-plan at the district level. The sub-plan will target each rural development programme to the poor. DPSU will analyse poverty scenario in a district and evolve plans to eradicate poverty and give inputs to DPC in programme implementation. In a way, the new agency will identify the poor and the reasons for their poverty and accordingly direct programmes to them.

However, there are very few states that have effective DPCs. So in the next five years as states revive DPCs, the district panchayat with DRDA as its unit will be the nodal body for planning and monitoring as an interim measure.

“We have tried to create a planning body at the district level with the right technical staff to make sure that poverty eradication programmes work,” says Ved Arya, a member of the MoRD committee. To help DPSU attract skilled development professionals, the committee recommends a Centrally sponsored scheme called Strengthening of Planning for Rural Poverty Eradication. This scheme will come with a guarantee of funding for at least 15 years.

The reforms in DRDAs are much needed. In the past one decade, most of the flagship rural programmes like the Mahatma Gandhi National Rural Employment Guarantee scheme and the watershed development programmes have been launched with their own implementation mechanism and mostly through panchayats. These programmes account for close to 80 per cent of the Central rural development budget. In these programmes DRDA does not have much role. “In this context you need a separate planning body,” says Arya. These programmes have their own fund allocation and management mechanisms. This further reduces the key role of DRDA to ensuring fund flow and its monitoring. This will have a direct impact on the funding of DRDAs. With reduced work load, the Centre will bring down its administrative support to DRDA.

But doubt persists whether the reforms will finally take wings. According to a member of the Planning Commission, in 2008 MoRD had initiated a restructuring process for DRDA despite opposition by the Planning Commission and the Union panchayati raj ministry. The then panchayati raj minister Mani Shankar Aiyar had vehemently opposed the restructuring process and demanded doing away with DRDA.

States prefer restructuring to abolition as it means curtailing of financial support to the huge administrative staff parked in DRDAs. “The rural development ministry will never let it happen as DRDA gives it absolute control over implementation of rural development programmes, and the panchayati raj ministry is not that proactive to make it happen,” says Tandon.