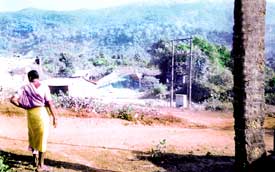 For more than ten years, residents of Saleli in Goa had complained to the government authorities against the menace of stone crushing units in their village. On December 28, 2005 their patience ran out: the enraged villagers attacked and killed Prithviraj Rane, who was on a visit to Saleli to survey a site for his new stone crushing unit. Hundred and nine Saleli residents, including six, who authorities claim are the 'main murder accused', are in police custody. The area simmers in discontent: women of the village are on dharna outside a temple demanding release of the incarcerated. The same demand was also raised at a huge farmers' morcha in Valpoi, a small town near Saleli. Farmers from more than 60 villages in Goa participated in this protest march.

The protests seem to have stirred the government machinery into action. "On January 9, 2006, show cause notices were sent to owners of Saleli's 13 stone crushing units, and these have been temporarily shut down under the section 133 (removal of public nuisance) of the Code of Criminal Procedure, 1973 . The owners have been asked to submit reports showing their units comply with pollution norms by January 23, 2006. Concerned state departments have also been asked to give their expert opinion by that date," says Arvind Bugade, deputy collector of Bicholim -- the subdivision, where Saleli is located. He then hastens to add,"The situation is under control."

Located close to the Mahadei wildlife sanctuary, Saleli is primarily an agricultural village with a population of around 1,200. Cashew, coconut and jackfruit are the main crops. But, says Rajendra Kerkar, an environmentalist from adjacent Keri village, "Saleli also has about 48 mines of meta basalt and meta granite, 13 stone crushers and two hot mix plants. And, these are a bane for the agriculturists. Mining has put paid to 15 of the 25 perennial streams in the village." Adds Radhike Ragobha, a 55-year old Saleli resident, "The dust from the stone mines has turned our fields grey; the cashew plantations cannot bear fruits because the plants remain perpetually shrouded in dust."

Ragobha was sitting on dharna, outside the village temple along with other women of Saleli, when this Down To Earth correspondent visited the village. She also complained, "Blasting in the mines would begin in early morning and carry on late at night. The noise pollution was driving us deaf." Added another villager who lives about 150 metre from one of the 13 stone crushing units, "Stone dust has begun telling on our health; my 18-month daughter suffers from constant cough and cold. And we don't even have a primary health care centre here. The nearest hospitals are in Valpoi or Sankhli, both about 15 km away." Grey dust hung over the house of this villager when this correspondent visited her. There has been no study to ascertain the impact of these 13 stone crushers on the health of Saleli's residents.

The blasting has also destroyed the village's drinking water and irrigation sources. Pointing towards one of the many blasting sites, Kishori Gawas, a Saleli resident, told this correspondent, "This used to be a perennial source of water, but stone crushing has put paid to it. Now, we have no option but to use groundwater. We have been complaining against this indiscriminate blasting for more than 10 years and have written to various departments. But the authorities have turned a deaf ear to our pleas." Another villager added that, "stones from the blasting site would often hit our cattle, injuring or even sometimes killing them. But the miners carried on with impunity." "We live amidst 13 stone crushers. The government should kill all of us because both our land and water sources have been destroyed," this villager snaps.

At the heart of the problem is Goa's mokasodari system, a variant of the zamindari system. Mokasodars claim to be owners of certain villages and they treat the other inhabitants as tenants (see box: Goa's Mokasodari system). Rane claims that his father, Krishnarao Rane, a Goan freedom, 'owned' Saleli. The area's residents also apprehend that Prithviraj has plans to sell off parts to the village to industrialists. But they are also determined to resist any such move. "We don't have any legal proof of ownership of our land but our ancestors have lived in Saleli much before Krishnarao Rane's family moved in here," says Ragobha.


The first pollution-related complaint from Saleli was filed way back in 1994 to the Paryavaran Vahini of Goa -- a scheme was launched by the Union ministry of environment and forests in 1992-93 to create environmental awareness through people's participation. The scheme also called on people to report illegal destruction of forests, and other acts of environmental degradation. But says Kerkar, a Paryavahan Vahini member, no action was taken on the complaint filed by Saleli's residents. The Vahini was finally wound up in 1997.

Then, on November 30, 2001, the villagers filed another complaint against Ramchandra Mule, a miner-based in Ponda town. Mule had cut down cashew trees to level land to set up a stone crushing unit in Saleli. Addressed to the deputy collector, the complaint claimed that another crusher would cause "irreparable loss both to their [villagers] health and income".

Since no action was taken, about 48 villagers filed yet another compliant on November 18, 2005 demanding either rehabilitation or closing down of all the 13 stone crushing units in Saleli. The complaint letter was sent to the chief minister, Goa State Pollution Control Board, deputy collector of Bicholim and Honda panchayat in which Saleli village falls. Admits Bugade, "We did receive the complaint and immediately sought the expert opinion from concerned government departments; January 23, 2006 was fixed as the date for hearing on this matter. But unfortunately the December 28 incident took place." He said that police investigation is on and as a precaution all the stone crushers have been shut down.

The case is now expected to come up for hearing on January 23. However, experts fear it may be just too little and too late.