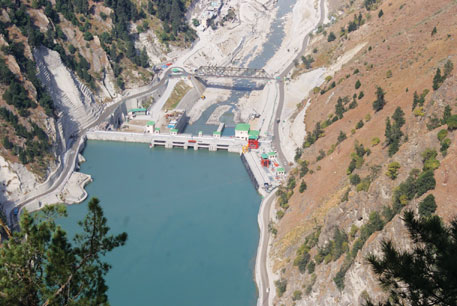 It is mid-February and has been snowing for the past few days in Kinnaur district on the eastern side of Himachal Pradesh. Roads, apple orchards and rooftops are all covered in snow; water in the tanks has frozen. The Sutlej River flowing through Kinnaur has receded. This has affected power generation at the 1,000 MW Karcham Wangtoo Hydro-electric Project built at the confluence of the Sutlej and Baspa rivers by Jaiprakash Hydropower Limited (JHPL). Winter is the lean season for hydropower generation. But even if it were summer, India’s biggest private hydropower plant could not have done better business. It has to sell power at compromised rates throughout the year due to lack of buyers.

Since the plant’s commissioning in September 2011, JHPL has not been able to sign long-term Power Purchase Agreements (PPAs) with any power distribution company (discom) across the country. As a result, it is selling its power through either short-term PPAs with discoms or the power exchange at low rates. Last year, JHPL had petitioned the Central Electricity Regulatory Authority to intervene in the matter. The decision was pending till the story went to press.

“The average cost of generating power at Karcham Wangtoo is Rs 3.60 per unit. But we had to sell it at an average rate of Rs 2.65 per unit between last April and February this year, incurring a loss of Rs 455 crore,” says D P Goyal, director, hydropower, Jaiprakash Power Ventures Limited, the parent company.

Karcham Wangtoo is not the only project finding it tough to sell electricity. The 70 MW Budhil Hydropower Project, built by Lanco Infratech Ltd, in Chamba district of Himachal Pradesh, has also been unable to sign long-term PPAs with any discom since it was commissioned in May 2012, say sources in Himachal Pradesh’s Directorate of Energy (HPDoE). This information could not be confirmed, as repeated calls and emails to Lanco by Down To Earth went unanswered.

No takers for surplus power

It is not only the private developers in the state who are struggling to sell power. Even the state government has had to sell surplus power at the exchange at unattractive prices for lack of buyers.

Himachal Pradesh generates more energy than it needs. The state requires around 1,200 MW of power, which it buys from discoms within and outside the state. Himachal Pradesh’s estimated hydropower potential is 23,000 MW. Of this, 8,432.47 MW has already been installed. Further, hydropower projects of 7,000 MW are under various stages of construction and clearances.

According to the Central government’s guidelines of 1990, project developers who built hydro projects after 1990 have to give 12 per cent power for free as royalty to the state in which the project is set up. In the case of Himachal Pradesh, this adds up to around 600 MW. The state also has a share of 300 MW in different hydro projects. Of its total 900 MW, the state government sold 400 MW to state discoms last year. There were no takers for the rest of the surplus power, 40 per cent of which had to be sold at power exchange at a low price.

According to a 2012 report of the Comptroller and Auditor General on hydro projects in Himachal Pradesh, the revenue earned by selling the surplus power has dropped significantly over the years (see ‘Revenue earned’). 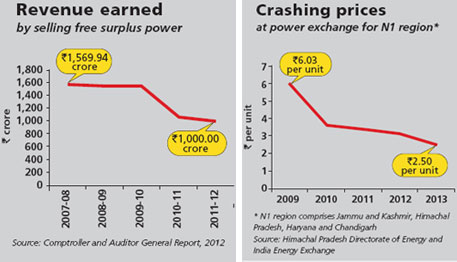 Why a lack of demand?

HPDoE director R D Nazeem says discoms of other states are not buying power from Himachal Pradesh. He gives an example. In November 2013, the state government wrote letters to various state discoms proposing to sell its share of 108 MW of power from the Rampur Hydropower Plant in Kullu district, which is to be commissioned shortly. “Even after four months not a single discom from the country has shown interest,” says Maneesh Mahajan, senior executive engineer, HPDoE.

Vinod Tiwari, director (personnel), Himachal Pradesh Power Corporation Limited, adds that most state discoms are in debt and are resorting to power cuts rather than buying power. “There is huge demand, but it is being suppressed by discoms,” he says.

According to the Ministry of Power, the total debt of discoms in India was close to Rs 1.9 lakh crore in 2012. The Centre introduced Financial Restructuring Plan to bail out the discoms. “The bailout only meant that our outstanding loans would be restructured over a period of time. It does not give liquidity to buy power. We are still in debt,” says an official of the Uttar Pradesh Power Corporation Limited, requesting anonymity. Uttar Pradesh has been one of the major buyers of power from Himachal Pradesh.

Shilpy Dewan of India Energy Exchange, one of the two power exchanges in the country, explains that the price of power at the exchange has dropped because supply is much more than demand. For example, in August 2013, the average power available for bidding daily was around 7,500 MW, but buyers purchased only 4,000 MW.

According to Mahajan, hydropower is not purchased as it has become expensive over the years, particularly in Himachal Pradesh. Currently, the capital cost of building a large hydropower plant is Rs 7-8 crore per megawatt. A few years ago, the cost was Rs 4-5 crore.

The hydropower industry and the state government also blame the delay in getting environmental clearances for escalation of the costs. “Developers often have to wait up to three years to get clearances. Delays increase the interest rate on the loan the developer usually takes from the bank,” says Shrikant Baldi, finance secretary, government of Himachal Pradesh.

He also questions interference by the Ministry of Environment and Forests in matters of environmental flow (e-flow). Hydro projects have to release certain amount of water in the river to maintain its e-flow for ecological and livelihood purposes. The Himachal Pradesh government has recommended 15 per cent e-flow throughout the year. “But the ministry often mandates 25-30 per cent e-flow as a condition for giving clearance, making hydropower expensive,” Baldi says. More water released means less production of energy, which increases tariff. “Unless hydropower is made cost effective it would not be taken up. We are already seeing diminishing interests,” he adds. All these factors combined have increased the cost of hydropower by 60 per cent in the last five years, adds Tiwari.

Then why is the state government building so many hydropower plants if power is not being sold, asks Guman Singh, convener of the non-profit Himalayan Niti Abhiyan. “India has huge power demand which should be met. The problem is of the market.

We need to find ways to correct it,” Nazeem replies.