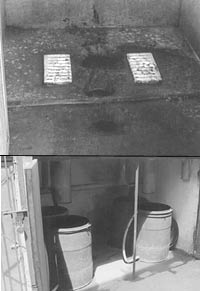 Bangalore-based non-governmental organisation acts ( Agriculture, Crafts, Trades and Studies), with help from the Swiss agency deza ( Direktion Fr Entwicklung Und Zusammenarbeit; Swiss Agency for Development and Cooperation), is experimenting with dry toilets that use less water and aerobically compost faeces. The idea is to do away with conventional water-consumptive sewerage systems. acts has set up these toilets in the Rajendranagar slums, which had next to no sanitation facilities worth talking about. The unit, set up in the slum area, has eight toilet rooms and cost Rs 8 lakh to set up.

The toilets are fashioned after the 'Indian toilet', which requires one to squat during use. The toilet bowl has three apertures; each designed to carry faeces, urine and water used for washing through separate pipes into separate containers. The urine needs no processing, other than a 1:8 parts dilution, which allows it to be used directly thereafter as a nitrogen-rich biofertiliser. acts uses the water for their gardening.

The faeces is churned manually, and then shovelled into square troughs. It is mixed with shredded paper wastes, provided by the information technology firm Infosys, in these troughs. Paper, by virtue of its composition, raises the temperature of the mixture, and hastens the process of fermentation. The mixture is left to ferment for 18 days. The waste is then put out in open-air beds, where it lies for another two weeks to allow aerobic decomposition. The soil treated with this compost was tested, and the results showed very high levels of potash (174 kilograms (kgs)/acre), moderate levels of phosphorous (13 kgs per acre), and sufficient levels of zinc, copper, iron and manganese. The soil was also highly alkaline, with a p h level of 7.1.

There are, however, some unresolved questions in this endeavour. Prime among these is that operation and handling of these wastes is currently done manually. In India, especially, this involves sensitive issues of social equations and human dignity. There are also health risks inherent in manual carrying of human wastes. To add to these problems, the composting site is an impractical 15 kilometres (kms) from the toilets. This requires wastes to be transported through the city, raising operation costs considerably, standing currently at about Rs 35,000 per month. "We are not even thinking about cost returns at this juncture," says S S Wilson, assistant director of environmental projects in acts . Ken Gnanakan, director of acts , agrees that costs need to come down. He has a counter-argument though: Is our 'modern' practice of sending wastes into sewers cheap?

acts volunteer and mechanical engineer Steven Ringeisen from the us is now in the process of working out a system of mechanical rollers wherein faecal wastes can be tipped into the mixing trough and churned without involving manual labour. Another option, to make the matter less 'raw', is having the deposit bins pre-filled with paper wastes to absorb liquids. acts is also studying the feasibility of on-site composting.

Gnanakan stresses that there isa need to change the mindset thatclassifies anything connected withfaeces as degrading, as also the mistaken belief that the present system of flush toilets is a safe and hygienic method. Faeces and urine are an essential partof the whole nutrient cycle, he says, and adds, "Unfortunately, this cycle has been obstructed by humans, especially in the developed world. It is deplorable that costly processed and purified drinking water is used to flush sewage down a toilet."

For centuries Asians have used human refuse as manure for growing food. The Chinese usage of human refuse as manure is at least 4,000 years old. While Japan continues to propagate techniques for effective faecal management, some countries in Scandinavia and Europe have already established environmentally judicious dry toilets. Vietnam, way back in the 1950s, initiated a rural anaerobic faecal composting system of toilets known as the 'Vietnamese double vault'. The system sends urine to a separate receptacle through a groove in the floor of the toilet, while faecal matter is collected in a tank and covered with soil to decompose. Kitchen ash is added to reduce odour. Not very different from the acts initiative today.