The number of Pacific salmons that return to their birth place to spawn is decreasing at a dramatic rate. Despite efforts by the Canadian government, the salmon population faces a bleak future 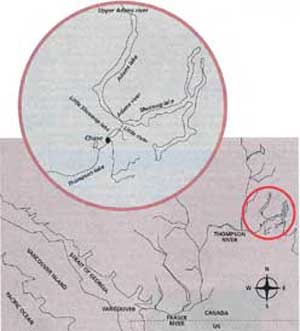 the future of the sockeye salmon, which return every year to the Adams, one of North America's most important salmon rivers, remains uncertain despite efforts by the Canadian Federal government to cut the large commercial fishing fleet to half. The number of salmon returning to the river has dramatically decreased in recent years, with only 1.4 million sockeye expected to return in 1996 to the Fraser river, of which the Adams is a tributary. This will be the lowest number in 40 years, with overfishing, pollution and habitat degradation all playing a part.

The method by which salmon can return to the stream of their birth to spawn and die following years in the open ocean is not well understood. It has been shown that salmon have an extremely acute sense of smell, capable of distinguishing the scent of their home river, and yet more than smell is at work. Scientists believe that they can also detect the earth's magnetic field, and that awareness of changing day lengths helps to determine the timing of the salmon migration.

The Fraser in Canada and the Columbia in the us were historically two of the world's great salmon rivers. There may have been runs of up to 100 million fish in the Fraser before this century, supporting the natives whose culture was to a large extent based around the salmon. The Columbia, a large-volume river like the Fraser, once also had salmon runs of similar magnitude, supporting a strong fishing industry. However, extensive dam building since the '40s has caused such a decline in the numbers of salmon native to the Columbia and its tributaries that many are now on the us list of endangered species. As a result, many American fisherfolk have turned to the salmon returning to the Fraser river as they pass through American waters.

Fisherfolk have protested the Canadian government's plans to halve the fleet size, occupying the offices of the government department of fisheries and oceans in a number of Pacific coastal towns in May 1996. They say that the cuts will hurt small operators and leave commercial fishing licenses concentrated with a few large corporations, while providing inadequate training and compensation for fisherfolk who lose their livelihood.

Canadian government policy is influenced by the economic devastation experienced by Canada's Atlantic provinces following the collapse of fish stocks. The fishery there has now been closed to Canadian boats to allow stocks to recover, and an agreement reached with the European Union to prevent their boats from catching the last remnants. The agreement followed Canada's arrest of a Spanish fishing boat which was fishing with an illegal fine mesh net in the summer of 1995.

The David Suzuki Foundation, a Vancouver-based environmental group, says that the kinds of net used to fish for salmon have to be changed. In a report released following the unexpectedly small Adams river salmon run of 1994, the Foundation said that it is necessary to "greatly reduce or entirely eliminate the use of gill nets, one of the most destructive and wasteful fishing gears ever invented and the only gear that precludes live capture and selective release of fish."

A clear blue-green river flowing from Adams lake in central British Columbia province, the Adams river supports a salmon run that is one of the most spectacular and economically important in the world. The young sockeye salmon are hatched in its gravel beds in the early summer before being swept downstream into Shuswap Lake. Covering some 30,000 ha, this large body of water acts as a nursery for the hatchlings for about a year, feeding on insects and acting as an important food source for trout. After a year, the salmon begin the journey through the Thompson and then the Fraser to the Pacific, where they spend three years before returning.

The salmon run on the Adams river is a four-year cycle, with the largest number of salmon returning in 1986, 1990, 1994, etc. -- the year of the "dominant run". Returning to the Adams, an extremely high percentage of the fish are caught by an efficient network of fishing fleets. In order to get to the mouth of the Fraser river, sockeye salmon have to first circumnavigate Vancouver Island, either to the north or south. To the north, this means taking the extremely narrow channel in Johnstone Strait between Vancouver Island and the mainland, where Canadian fishing boats with seine nets can effectively block the route. To the south, the salmon pass first through American waters where the us fleet is waiting in the Strait of Juan de Fuca.

The warming of the Pacific ocean, known as the El Nio effect, has also had a considerable effect on Fraser's sockeye stocks. One reason for this is that large schools of mackerel move north with the warmer water, eating many of the young salmon shortly after they have reached the sea. Extremely warm water conditions in the Pacific in 1992 and 1993 are considered a factor in the low numbers of sockeye returning for the dominant run in the Adams in 1994.

A major river diversion proposal by the aluminium company Alcan was stopped in 1995 by the British Columbia provincial government, who said it was a threat to Fraser salmon. The project to divert the Nechako river, one of the source streams of the Fraser, was to be the second phase of a power generating project for aluminium production. The Nechako, an important salmon spawning river, was already 40 per cent lower than its original level due to the Kenney Dam diversion project by Alcan in the '50s. The decision was made despite threats by Alcan to launch a lawsuit seeking millions of dollars in compensation for what it said was a broken contract by the government.

The Fraser's relative freedom from dams and diversion projects is in stark contrast to the Columbia river. Since the late '40s, a total of 17 major dams have been built on the Columbia, completely blocking it except for a 30 km stretch of free flowing water near the Hanford nuclear weapons facility. It is an irony that Hanford is also known for an extremely high level of radioactive groundwater contamination which some estimates place as taking more than 50 years to clean up.

Despite the dams, salmon still survive in the Columbia, although at a fraction of their previous population. One technique for enabling salmon hatchlings to bypass the dams on the Columbia has been that of transporting them around dams in barges. This has been criticised as interfering with the salmon's ability to imprint the scent of their home river and enabling them to return.

Early this century, a legendary Canadian salmon run from the upper Adams river was rendered extinct due to a dam, in an event which foreshadowed the tragedy of the Columbia. The present Adams salmon run is from salmon returning to the river below Adams lake (see map), but prior to 1907, a distinct sub-species of salmon passed through the lake to spawn in the upper Adams river, which enters the lake at its northern tip. In 1907, the Adams river Lumber Company made a dam across the southern outflow of the lake, blocking the access of salmon to upper Adams. Every year, water was released from the dam in sudden violent floods to float logs downstream, which also disrupted the spawning salmon in the lower Adams river and damaged their nests in the gravel.

While the lower Adams river population has recovered, the unique species which returned to the upper Adams has been lost. Intensive efforts to renew this run since the '50s have proved extremely difficult. It was not until the early '80s that the first real success was achieved, with a run of 3,000 salmon returning. In the case of the Columbia, it has been estimated that 95 per cent of young salmon fail to negotiate the dams, killed in dam turbines or else, unable to find a way around. Extinction faces these fish. A striking example is the autumn run of Chinook salmon to the Snake river, the Columbia's main tributary, which reduced to 300 in 1994 from around 72,000 in the '40s.

According to the David Suzuki Foundation report, it may take 30 years for Pacific salmon stocks to recover if action is taken immediately. The spectre of the collapsed fishing-based economy of Canada's East Coast, and the tragedy of the Columbia river salmon remain as reminders about the consequences of doing nothing.