Drying up of an empire

Water crisis behind the decline of Angkor Wat

Drying up of an empire 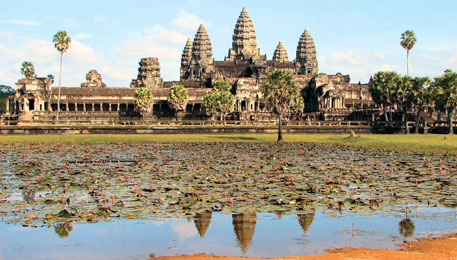 In 1861, French botanist Henri Mouhat published a travelogue describing his visit to a “lost empire” in Southeast Asia. Hidden in the jungles of what is today Cambodia were temples of breathtaking magnificence. Mouhat announced he had rediscovered a lost empire: Angkor Wat.

Within a year of the announcement French colonists annexed Cambodia, and in their wake came Western scholars. More than a century of investigation revealed Angkor as a complex state that was a major player in Southeast Asian history between AD 800 and 1400.

It was remarkable, among other things, because of its extensive water management system stretching across over 1,200 square kilometres. The complex centred on three great reservoirs (barays) that diverted water from the Puok, Roluos and Siem Reap rivers. Canals built around these rivers and reservoirs allowed for a vast urban complex with a low-density patchwork of homes and temples.

Water systems used by the Angkor civilisation to cope with the vagaries of weather included raising houses on mounds or stilts and building and excavating small ponds at the household level and larger ones (trapeang) at the village level. Most trapeang were rectangular and generally aligned east-west: they were associated with and perhaps controlled by the temples. Most temples also had their own moats, which were square or rectangular and oriented on the four cardinal directions.

At its height, Angkor was home to an estimated one million people. The network allowed Angkor to flourish for six centuries despite the difficulties of maintaining a state-level society in the face of successive dry and monsoon seasons. “Even on a quite conservative estimate, Greater Angkor, at its peak, was the world’s most extensive pre-industrial, low-density urban complex,” says archaeologist Damian Evans of University of Sydney.

But its expansion was also the Achilles’ heel of the Angkor Wat empire. When the rivers dried up, a combination of infrastructure collapse and environmental degradation likely destroyed this once extraordinary civilisation.

Last year Mary Beth Day, a paleolimnologist at University of Cambridge in England, hired a “tuk-tuk” (motorised rickshaw) driver, and convinced him to drive her around the Cambodian countryside, “often on tracks that tuk-tuks probably aren’t designed to travel on,” she told news agencies.

Beth Day deduced a 1,000-year-long climate history of Angkor from the remains of the reservoir. They found at around the time Angkor collapsed the rate of deposition of sediment in the barays dropped to one-tenth of what it was before, suggesting that water levels fell dramatically as well. As both water levels and sediment deposits ebbed, the baray ecology changed, with more bottom-dwelling algae and floating plants coming into existence.

“Angkor can be an example of how technology isn’t always sufficient to prevent major collapse during times of severe instability,” Day told the journal, LiveScience. “Its sophisticated water management infrastructure was not enough to prevent its collapse in the face of extreme environmental conditions.” Brendan M Buckley of University of Colombia says bands from tree rings he and his colleagues examined show Southeast Asia was hit by a severe and prolonged drought from 1415 until 1439, the period when, many archaeologists believe, Angkor collapsed. Buckley, one of the world’s leading dendrochronologists, has spent the past 16 years taking core samples from trees across Southeast Asia to build a record of the region’s climate dating back hundreds of years.

Day adds a caveat, though: “The changes in sedimentation, maintenance and ecology of the basin are the result of complex interactions between climatic and anthropogenic factors, such as water management and land use .... It is difficult to distinguish the role of each, but they often work hand in hand.”