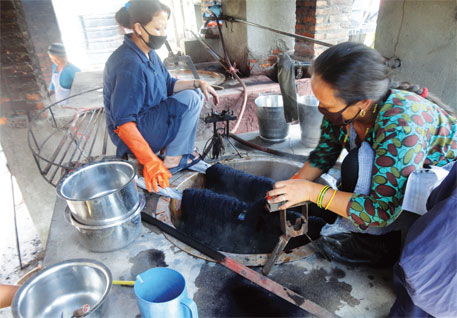 “First add sodium carbonate and then sodium hydroxide. Add magnesium sulphate after six hours,” Rezina Khadgi instructs her coworker. Khadgi, 24, does not work in a chemistry lab but at a dyeing unit of Kumbeshwar Technical School (KTS) in Kathmandu where her job is to neutralise harmful effects of chemicals in the effluents released by the unit. KTS’ dyeing unit is among the few in Nepal that have begun treating their effluents and reusing the treated wastewater by installing a simple, cost-effective technology developed by non-profit Handmade Water (HMW).

Earlier, in the absence of proper sewage treatment system in the Himalayan country (see ‘Darkling waters’, Down To Earth, October 1-15, 2012), almost all dyeing units would release untreated toxic effluents directly into the river or sewage system. In 2007, Nepal’s environment department introduced stringent effluent standards for dyeing units, but it neither set up treatment plants nor provided any technology for treating wastewater.

In an effort to treat effluents at the point of generation, Fair Trade Group, an association of textile majors, promoted a Danish technology. “The expensive technology did not take off. Nearly 50 per cent of the country’s dyeing industry constitutes of small-scale dyers. Even the large dyeing and handicrafts units need the expertise of small dyers,” says Kiran Khadgi, director of KTS.

This is when HMW came to the rescue. “Our cheap deep-sand-filtration technology is widely used in Nepal for filtering drinking water,” says Prakash Amatya, director at HMW. “We planned to improvise on the filter and make it suitable for treating chemicals. But the challenge was removing carcinogenic chemicals like azo dyes, used extensively by dyers in Nepal.” HMW adopted a two-pronged strategy. “We spread awareness among dyers not to use azo dyes, which have been banned by several developed countries, including EU members, while a team of experts experimented to build a cost-effective effluent treatment plant. In 2009, HMW installed the plant at seven handicraft industries for trial. It worked. The treated wastewater was much cleaner than the standard set by the government and could be reused (see ‘Purifying pollutants’).

“I used to live under constant fear of probable rejection of consignments by international clients for using azo dyes and rebuke from the Environment Department for not meeting the effluent standards,” says Sunil Chitrakar, owner of Mahaguthi Craft. Chitrakar’s annual turnover has doubled since he installed HMW’s effluent treatment plant about two years ago. He now plans to expand his dyeing unit.

At present, HMW provides a 500-litre effluent treatment plant for USÃ”Ã‡Ãª$700 and a 1,000-litre plant for US $1,000. “Even this is expensive for small-scale dyers,” says Amatya. His organisation is in talks with the government and other philanthropic organisations to help the dyers procure the plant at a subsidised rate. HMW is now promoting the effluent treatment plants among small-scale dyers in Bangladesh.