The growth of cities and industries has severely affected the environment. The spread of disease has increased with the spread of civilisation 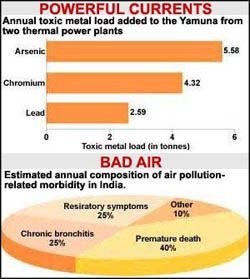 Scientists worldwide now accept that along with industrialisation and urbanisation, there has been a steady destruction of nature. Cities and industries have both affected clean air and clean water.

Industries produce a lot of hazardous wastes; and cities produce a lot of garbage. Hazardous wastes pollute the groundwater. Accumulation of garbage allows disease-causing agents to proliferate. K C Sahu, formerly with the Indian Institute of Technology, Mumbai, raised the concern that heavy metal contamination was increasing due to mining, mineral processing, the burning of fossil fuels and industrial and agricultural activity. The annual toxic metal load added to the Yamuna exclusively from two thermal power plants- Rajghat and Indraprastha in Delhi are estimated to be 2.59 tonne of lead, 4.32 tonne of chromium, 5.58 tonne of arsenic and so on, totalling up to 23.07 tonne (See graph: Powerful currents).

Modern agricultural practices lead to the saturation of soil and water with chemicals used as fertilisers and pesticides. Data show that the total production of pesticides in India has increased from 13,948 tonne in 1966 to 88,890 tonne in 1994-95. By 2025 India may have to feed 1.6 billion people and may need about 301 million tonne (mt) foodgrain alone. This means more fertilisers and more pesticides. Scientists note that availability of good quality land and water is rapidly declining due to chemical-intensive agriculture practices. The toxins generated enter the human body through the food chain.

Intensive agriculture also leads to depletion of micronutrients such as copper and molybdenum from the soil. This leads to poor food quality and micronutrient deficiency in human beings (See box: Problems intensified).

Moreover, social and health implications of this shortage of water, grasslands, biomass, food availability as well as shift in agricultural patterns, have hardly been studied.

The tools that shaped the modern world not only depleted the wealth of nature, but also made the environment more hospitable to disease-causing agents. Irrigation and urbanisation have introduced into our ecology new conditions that promote the breeding of disease-spreading agents such as mosquitoes, notes V P Sharma, former director of the Malaria Research Centre (MRC), Delhi.

There has been a sharp increase in malaria along highways, irrigation canals and industrial areas as they promote water-logging and lead to the formation of depressions and trenches in which rainwater accumulates.

Another major factor contributing to ill-health is poverty. According to 1994 WHO estimates, 75 per cent of people in developing countries had access to potable water, and only 35 per cent to sanitation. Low income means limited money for obtaining health services, high risk of personal illness, limitations on mobility and limited access to education, information and training, the WHO notes. The poor cannot provide their children with opportunities for better health and education. The World Health Report 1995 concluded that poverty is the world's deadliest disease.

The process of impoverishment sets the scene for an increase in diseases. Disrupted social conditions, poor nutrition, poor housing and physical and emotional stress also contribute to diseases of various kinds. The working and living environment contributes to increase in tuberculosis (TB). For instance, TB was a big problem among the postpartition refugees in 1947. Tibetan refugee settlements in India have also reported a high prevalence of the disease.

Poor sanitation and unsafe drinking water have posed major health problems in India. Water and sanitation-related infections and the diseases of the alimentary tract constitute 60 to 80 per cent of illnesses in India, according to K J Nath, director of the All India Institute of Hygiene and Public Health, Calcutta. Several such diseases including diarrhoea, dysentery, typhoid fever, intestinal helminths, jaundice and cholera are endemic to India. Statistics reveal that only 200 out of approximately 4,000 towns in India have a sewage disposal system, and that too partially. We still have 400,000 scavengers in the country and there are 7.2 million dry latrines in 2,587 towns.

Environmental and public health interventions together can bring about dramatic results in disease reduction. It maybe noted that the Madhya Pradesh government adopted the Rajiv Gandhi Mission for Control of Diarrhoeal Diseases in 1994, incorporating effective monitoring, increasing access to ORS (oral rehydration solution), ensuring safe drinking water, control of cholera and rational treatment. Mobilising collective action and community leadership was to be central to the overall startegy of the mission. As a result, from 1994 to 1997, deaths due to diarrhoea came down from 2928 to 386 in the state.

Solid waste is also a major problem in India. Over 40 per cent to 60 per cent of our solid waste is not collected or disposed of in a proper manner. Hospital waste continues to be dumped along with other garbage in many cities. Recently, the Union government has come out with an order to prevent this. However, it will take time to be implemented countrywide. Large-scale soil and water pollution is one of the primary factors behind the high prevalence of soil and water-borne diseases, states Nath.

According to a WR study on India, environmental damages were to the tune of Rs 33,950 crore and the cost of inaction is 4.5 per cent of the GDP in 1992. Of this, over 70 per cent is in terms of the health impact of air, water and poor sanitation. Issues such as hospital waste are not given enough consideration.

The biggest problem is that people may never come to know how the environment is changing and leading to deterioration of their health. When an epidemic such as dengue haemorrhagic fever strikes, as it did in Delhi in 1996, and people die, there is a hue and cry. But slow, steady exposure to toxins affect the human body very differently, and stealthily. The toxins creep into the body, slowly, sometimes causing lethal diseases and even death.

The WB estimated that, in 1991-92, some 40,000 people died prematurely due to air pollution, caused only by high levels of poisonous particles in the ambient air of 36 Indian cities for which data was available. If data had been available for pollutants like ozone and benzene, the death count would have been higher. When CSE repeated the study, using air pollution data for 1995, it found that the death count had gone up to 52,000. Delhi alone had recorded an increase from 7,491 in 1991-92 to 9,859 in 1995. This means more than one person dies in Delhi every hour due to air pollution. This death count is more than all the people killed so far due to the insurgency in Punjab, Kashmir and the northeast. In comparison, the dengue epidemic of 1996 killed only one-twentieth of the number of people.

Doctors are often clueless about this slow murder. They cannot even tell a patient that he or she contracted cancer or a serious respiratory illness because of exposure to a particular pollutant. In India, doctors may not even recognise many new forms of diseases.


The water and soil is laden with toxins, the air we breathe is fast getting polluted by the noxious fumes spewed out by vehicles and industries. S K Chhabra of the Vallabhbhai Patel Chest Institute, Delhi, notes that the levels of suspended particulate matter (SPM) in Delhi's ambient air, on most days of the year, are much above the norms set by the Central Pollution Control Board (CPCB). "A crude prevalence of respiratory symptoms are found in 50 per cent of office-goers", says Manoj Dhingra of AIIMS.

Chhabra's study showed that short-term and acute exposure to air pollutants SPM, ozone, oxides of nitrogen and sulphur dioxide led to aggravation of symptoms and deterioration of lung function in patients with asthma and chronic obstructive lung function. S R Kamath an expert of respiratory medicine, formerly with KEM hospital, Mumbai, notes that the morbidity for cough, common colds, eye irritation and headache showed a strong correlation with air pollution.