The deadly virus had long confined itself to the backwoods of Africa. Increasing deforestation has led to its frequent emergence as epidemics 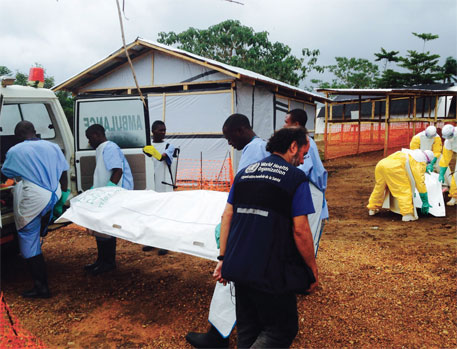 EBOLA IS back, and this time it has held the world hostage. With 3,700 people suffering from the haemorrhagic fever and more than 1,800 deaths in four West African countries, as of August 31, this is the biggest outbreak of Ebola ever recorded. The World Health Organization has declared the epidemic an “international emergency” and called for “extraordinary measures” to contain it.

In the absence of any proven cure, the WHO on August 12 authorised the use of experimental drugs to fight Ebolavirus. “In the special circumstances of this Ebola outbreak it is ethical to offer unregistered interventions as potential treatments or prevention,” WHO assistant director general Marie-PauleKieny said in Geneva, following a meeting of medical experts. The UN health body also called on member states and donor agencies to boost funding and efforts to battle the virus. The reason for such desperate measure is that little is known about the virus, though it was discovered way back in 1976.

The few scientists who have tried to understand the virus say the present outbreak in Liberia, Nigeria, Sierra Leone and Guinea seems to have been caused by the deadliest of the five strains identified so far. Known as Zaire, the strain can kill nine of the 10 people it infects within a week of the appearance of symptoms. Another striking aspect of the outbreak is that the virus has for the first time hit West Africa. Until now, the virus had remained confined to the backwoods of eastern and central Africa. How did the virus travel to West Africa and cause epidemic? Understanding this is the first step in preventing future epidemics from happening.

What leads to its emergence

Studies show the virus is alien to humans. It is harboured by fruit bats and a few species of chimpanzees that live in deep forests. As people come in contact with these wild animals, the virus gets an opportunity to infect humans. “Formerly sporadic...the deadly Ebola haemorrhagic fever outbreaks are becoming more and more frequent in Africa,” say African and US experts in a 2012 study published in Onderstepoort Journal of Veterinary Research. This is mostly due to increasing contact with the infected wildlife, they say.

An outbreak of Ebola in Gabon in 1994 is thought to have started after gold miners ate an infected gorilla. More than 30 people had died. While bush meat is a delicacy in the region, people in West Africa are fond of eating fruit bats in stews. The current Ebola strain has been transmitted by fruit bat, according to a research paper, titled “Outbreak of Ebola Virus Disease in Guinea: Where Ecology Meets Economy”, published in PLoS Neglected Tropical Diseases in July this year.

Some scientists, however, say cooked meat is not a risk as the virus is killed on cooking. In most outbreaks, Ebolavirus is introduced into human populations via handling of infected animal carcasses, says J JMuyembe, one of the researchers of the 2012 study. “Deforestation may be the indirect cause,” he says. “Bats may migrate to the villages in search of fruits. For example, the abandoned gold mine of Gorumbwa in Watsa (in Congo) was the source of Marburg virus outbreak in 1999,” adds Muyembe.

Figures for deforestation support his observation. In recent years, Ebola has struck all countries that have lost large tracts of forests. According to the UN Environment Programme (UNEP), Guinea has lost 20 per cent of its forests since 1990. According to the 2012 report of non-profit Global Witness, more than half of Liberia’s forests have been given to logging companies. Nigeria is among the top 10 countries at the highest risk of deforestation. The situation is worse in the war-ravaged Sierra Leone. Forest cover in the country has dropped to 4 per cent. At the present rate of deforestation, it could disappear by 2018, says UNEP (see ‘Out of the jungle’). 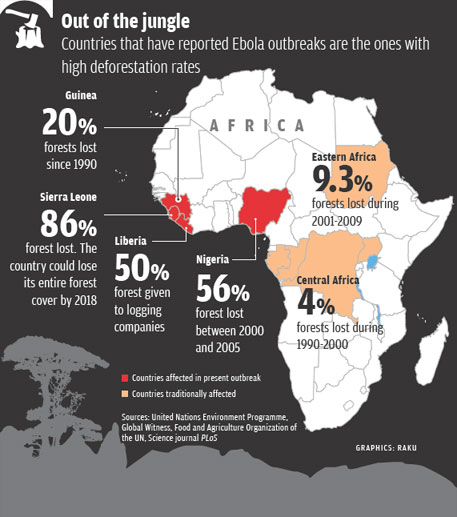 As conflicts and extreme weather force people to venture deeper into the forests in search of newer means of livelihood, to hunt bushmeat and plunder caves, they come in contact with the wildlife that carry Ebola (see ‘Ebola is the result of...’). Once the virus infects a person, it transmits to family members or healthcare staff through body fluids, especially blood. Since Ebola is seen as a social stigma in Africa, patients refuse to be quarantined. This, along with cultural practices like rubbing down bodies at funeral rites before interment, contribute to the spreading of the outbreak.

While biological and ecological factors have driven emergence of the virus from the forest, the socio-political landscape dictates where it goes from there—an isolated case or two, or a large and sustained outbreak, says the PLoS Neglected Tropical Diseases study. Unlike previous outbreaks, where the disease remained confined to scattered remote areas, this time the virus has spread to urban areas, including capital cities.

“Outbreaks like Ebola are more of a developmental problem,” says K KDatta, former director of the National Centre for Disease Control, Delhi.

The US’ Centers for Disease Control, on its website, also mentions that activities like laying roads for logging, which lead to fragmentation of habitats, and bushmeat trade are responsible for emergence of microbes, such as Ebolavirus, from forests. Annie Wilkinson, researcher at the Institute of Development Studies in the UK, says high levels of migration and mobility within and across borders increases the likelihood that an outbreak spreads further.

With more than 44,000 Indians living in the four affected West African countries and the important trade relation India shares with the African region, the virus could be just a plane ride away. Union Health Minister Harsh Vardhan recently said in Parliament that all precautionary measures were being taken by India to ward off the threat of Ebola disease. All those living in the affected countries will be called back in case the situation worsens, he said. To prevent the virus from entering the country, the government has announced screening and tracking of passengers originating or transiting from affected regions, and asked people to defer non-essential travel to West Africa.

About 10 travellers who arrived at Delhi and Chennai airports in the first two weeks of August with symptoms of Ebola were immediately sent for blood analysis. Test results showed they were not infected with the virus. A non-profit in Kolkata has, meanwhile cautioned sex workers not to entertain people from African countries. “If the virus enters India, diagnosis will be a problem. We do not have enough facilities or funds,” says Datta.

The only treatment available for the disease is supportive therapy that includes balancing fluids and electrolytes, maintaining oxygen and blood pressure and treating the patient for complications. “This requires proper healthcare facilities, sterilisation of equipment and protective clothing for health workers,” says Sampa Mitra, department of epidemiology, All India Institute of Hygiene and Public Health in Kolkata. “Even these are not available in the country,” she adds.

Given the load of infectious diseases in the country, India must be on guard till treatments for the fatal disease are available.

Since 1976, there have been almost two dozen outbreaks of Ebola in about 10 countries in the central and eastern parts of the continent. Yet treatment has not moved beyond the experimental stage. For instance, researchers at University of Cambridge, UK, and the New Iberia Research Center, US, have tested an Ebola vaccine on captive chimpanzees with success. “It is safe and immunogenic,” they write in the journal PNAS this year. But they have been waiting to conduct clinical trials of the vaccine on humans.

Two health professionals from a US-based non-profit Samaritan’s Purse who contracted the disease in Liberia and are under treatment in Atlanta have shown signs of improvement after they were given an experimental drug ZMapp. ZMapp is a serum manufactured by Mapp Biopharmaceutical of San Diego and DefyrusInc of Toronto.

The WHO has also announced that clinical trials of a vaccine were set to get under way, with widespread use predicted by early 2015. The vaccine, being developed by British drug maker GlaxoSmithKline in partnership with the US scientists, has shown promising results in studies on primates.

What had stopped these companies from conducting clinical trials before? Funding and inadequate health infrastructure have a major role to play in outbreaks like these, Tarik Jasarevic, spokesperson of WHO told Down To Earth. A few researchers say there was not much interest or funds to study the disease that affected only the poor living in the hinterlands. This is for the first time the virus has afflicted those living in urban areas, including capital cities, and a few foreign nationals. On August 12, a Spanish priest succumbed to the virus in a Madrid hospital. He contracted the disease in Liberia. Earlier, a US national working with the Liberian government had also succumbed to the disease in Nigeria.

One hopes that an effective treatment against the elusive disease would now be available without further delay.