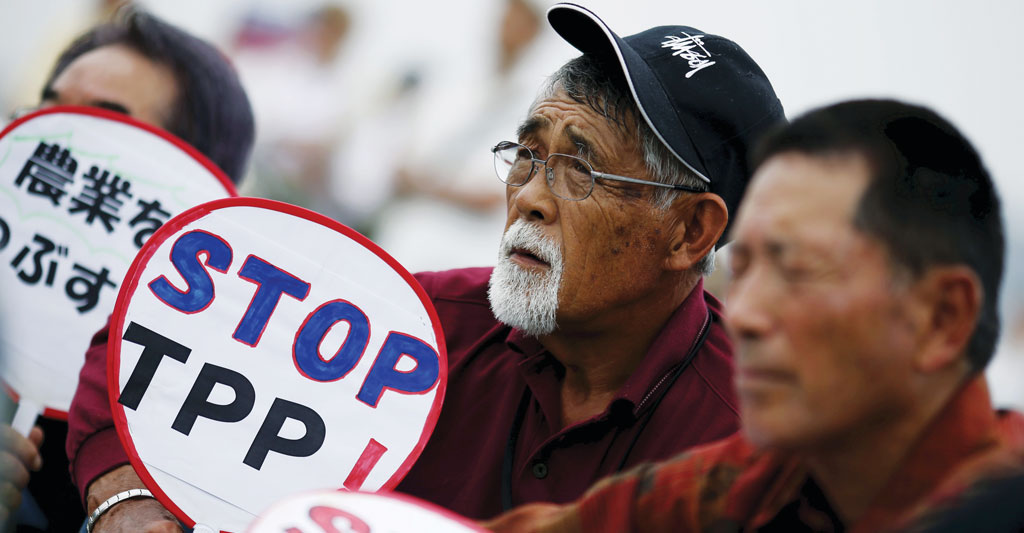 FOR A long while it was a distant bogey, a creature whose form was indeterminate and whose characteristics were shrouded in secrecy. Then came a series of leaks that revealed some of its features, none of it wholesome. As the Trans Pacific Partnership, or TPP, a mega trade and investment agreement, took clear shape and picked up pace in negotiations it has become one of the most widely discussed acronyms globally, more so in nations that are not among the core members. TPP clubs together US, Japan, Australia, Peru, Malaysia, Vietnam, New Zealand, Chile, Singapore, Canada, Mexico, and Brunei Darussalam, nations across the Atlantic and Pacific. It represents some of the most robust economies that account for nearly 40 per cent of global GDP and 26 per cent of trade. Eager to join are a handful of other nations, notably South Korea and Taiwan. The TPP behemoth is roughly the size of the Trans-Atlantic Trade and Investment Partnership (TTIP), another looming monster that will put the US and the EU in a tighter economic embrace.

It’s the next big thing on the world trade scene, and for India, which is not part of the 12-nation group, TPP presents a huge dilemma: should it try to join the pact with its target of a zero tariff regime and high standards, or face inevitable trade exclusion? TPP’s bite is in the agreement on labour standards, environmental standards and Intellectual Property Rights (IPR) standards, all of which are rich countries requirements that are unacceptable to developing countries because these will have an impact on their economic development. The WTO-plus standards—so termed because it sets higher standards than required by the World Trade Organization (WTO)—that this agreement demands is one reason why global civil society groups, think tanks and even members of the US Congress have launched a campaign against it.

The other reason TPP has turned into an acronym of fear is on account of the deep secrecy surrounding the negotiations. So secretive is the process that a draft on healthcare rules leaked by WikiLeaks shows it is restricted from release for four years after the passage of the TPP into law (see ‘What the WikiLeaks reveal’).

The US-based Electronic Frontier Foundation, which works to safeguard Net freedom, warned in October last year in the wake of another leak that TPP “will rewrite the global rules on IP enforcement”. Members would have to change their domestic laws and policies to meet the enhanced levels of IP protection on copyright and patents.

Such fears were fuelled once again when WikiLeaks released another set of documents on June 10. According to one analysis, it will force healthcare authorities to give big pharma more information about national decisions on public access to medicine, while at the same time granting corporations greater powers to challenge decisions they perceive as harmful to their interests.

An expert analysis published by WikiLeaks along with leaked drafts said the healthcare rules appear designed to cripple New Zealand’s strong public healthcare programme and to inhibit other nations from adopting similar policies. It also believes the rules will “tie the hands of the US Congress in its ability to pursue reforms of the Medicare programme”.

But what is the critical issue for India? The TPP is in the country’s backyard, so to speak, and the risks therefore are not very far off. India, like China, has officially shown no inclination to join the controversial trade pact. Even if it wished to do so, all the TPP members have to agree on its joining, a rather unlikely prospect in the near future since India’s standards fall far short of the norm.

Over the past year, the Ministry of Commerce has become increasingly worried about the implications of TPP and has been holding a series of meetings to grapple with the issues posed by the emerging behemoth. Commerce Secretary Rajeev Kher has been encouraging industry to look at TPP as “an opportunity to look at our own standards and bring it up to global levels” to make Indian exports more competitive. In April, once again, at a FICCI seminar, Kher warned the TPP and TTIP will pose challenges to Indian industry as India is not part of these pacts.

Earlier, Sujata Mehta, secretary in the Ministry of External Affairs told a Confederation of Indian Industry (CII) meeting of trade policy experts and industry chiefs in August 2014 that “TPP may well become the gold standard”. This would leave the country with two options: either consider joining the TPP or adopting WTO plus standards.

On India’s export prospects, the outlook is clearly grim. Harsha Vardhan Singh, senior fellow at the International Institute for Sustainable Development, gave a worrying prognosis at the CII meeting. Market access for India’s exports would not only be hit by TPP but access to large parts of the global markets will prove difficult even after upgrading capacities to meet higher standards.

Singh, a former deputy director-general of WTO, warned that poor countries would find themselves shut out of global markets because of these mega trade pacts.

“The important thing is not just meeting the standards, but also the system which is used to determine that the standard is actually consistent with what is being demanded,” Singh told the meeting. That system often tends to be exclusionary.

At a July 2014 workshop in Beijing to discuss implications of TPP specifically for India and China, Singh clarified there would be two types of standards with higher content. The first is the more generic, such as environmental and labour standards, and their impact would be on many sectors of the economy. The second would be product-specific standards, with higher levels of content requirements and increasing over time through their link with developments in private standards.

Because these standards will become increasingly higher and more pervasive, India would have to improve its capacity building in the area of standards. Without such measures, Indian exports could face sudden death in the TPP and TTIP countries. That’s half the world market.