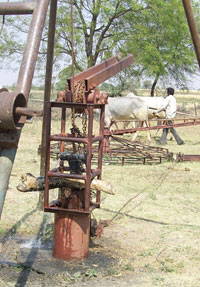 Apair of bullocks operating an iron contraption is a big draw at Melkama village in Indore district. The brainchild of Vinod Parashar, a scientist at Shri Govindram Seksaria Institute of Technology and Science in Indore, the device has an unwieldy name, ‘Linkage-based input-output shaft’. But don’t go by the sound of it.

The farmers thronging Melkama believe the device could help them draw irrigation water, a resource made scarce by electricity shortage in Madhya Pradesh. The bullock-powered device can draw 6,000 litres of water from a well or borewell in an hour. Since the bullocks complete about two-and-a-half turns in a minute, the amount of water lifted per minute is approximately 100 litres at two litres per stroke, Parashar said. At this rate, 36,000 litres can be lifted in six hours, enough to irrigate a two-hectare farm (see: ‘How the pump pumps).

Alth ough bullocks have been traditionally used for drawing water for irrigation, Parashar’s device does it more efficiently.

The scientist has installed a prototype device at Melkama. Elderly Bansilal, the farm’s caretaker, has been operating the pump for six months. “If an electric pump develops a snag in the mid-season, it takes a farmer several tense days and a lot of expense to repair it. This pump is so simple there is little scope of its going wrong, leave alone repairs,” he said.

The pump has also caught the fancy of politicians and bureaucrats. Parashar has received several orders for demonstration pieces from people’s representatives, including Ratlam city MLA Paras Jain and an Indore corporator, Balram Verma.

But there is a hitch before the device becomes a feature in small farms. At Rs 25,000 per unit, the pump is too expensive for a marginal farmer, Parashar admits. He thinks a subsidy is needed to popularize it among small and marginal farmers.

Parashar has applied for a patent. “Otherwise the device might be appropriated by big businesses,” he said. Once he gets the patent, the scientist intends to organize training sessions for village welders with the help of government and non-government agencies.