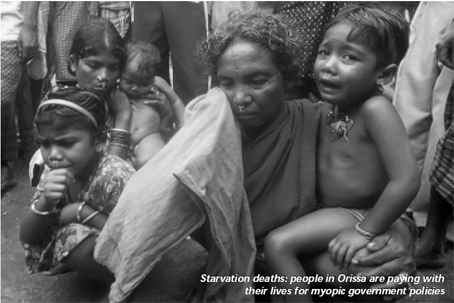 BHAGWAN SAHOO looks pensive and despondent. This 60-yearold farmer is trying hard to redefine his life. A farmer by heart, Bhagwan has decided to quit farming. His two sons have already abandoned the village and him, in search of an alternate livelihood. The 1999 killer cyclone left Bhagwan with nothing. It not only razed his house but the seawater made a thick sheet of salt on his once-fertile fields.

The year 2000 brought an unprecedented drought and dashed his flickering hopes. Strapped for cash, Bhagwan had to borrow money in the hope that the next monsoon would bring him some luck. “Monsoon never fails so frequently,” he had thought then. For more than 40 days the monsoon of 2001 kept pouring and submerged Bhagwan’s lands with water and sand forcing Bhagwan to move to a place where his sons had already migrated.

Bhagwan is not alone. There are many like him who are abandoning their homes. Says Manoj Pradhan, “Usually it is the west Orissa that reports distress migration not the fertile coastal plain region.” But since the last five years more and more people are migrating from coastal Orissa. Droughts, cyclones and floods have hit agriculture the most, the state’s backbone. The production of foodgrain has plummeted alarmingly and this trend is prevalent throughout Orissa. In the last 50 years the food production has decreased by 40 per cent.

Due to calamities, at an average 900,000 ha of agricultural lands lose crops every year in the state. Orissa is India’s poorest state and over 53 per cent of its farmers are marginal with less than one ha of land. And most of them own the uplands, which are totally degraded. “So even a small failure of crop due to any calamity will have a long-term impact on the economy,” says C N Pradhan, secretary of the Bhubaneswar-based N K Chaudhury Centre for Development Studies. The calamities have taken a heavy toll on the state’s economy.

According to the state economic survey report, agriculture’s share in the net state domestic product has decreased from 33 per cent in 1998-99 to 30 per cent in 2000-2001. Besides, constant agricultural losses has brought per capita cultivated land from 0.39 ha in 1950-51 down to a dismal 0.18 ha in 1997-98. While a large part of the rural development budget is spent on calamities, crucial sectors like water resource and basic health don’t get much share. Virtually, the state survives on debts. Orissa gives away 46 per cent of its gross domestic product for debt service.

The per capita gross domestic product of Orissa in 1997-98 was Rs 1,924, which was 41 per cent lower than the national average. Malaria changes form As Orissa experiences frequent disasters and fast becomes an ecological and economic nightmare, its backlash is being felt on the health sector. Parasites causing