Great Indian Bustard has been pushed to extinction in its biggest sanctuary; breeding stops 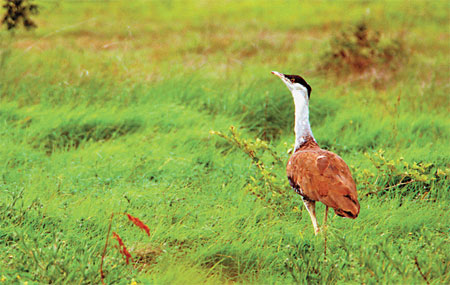 Just mention the large brown-and-white bird and the residents of Mardi village in Solapur burst out in anger. The district in Maharashtra is one of the few refuges for the rare Great Indian Bustard (Ardeotis nigriceps), endemic to the grasslands of India and Pakistan. Of the 30-35 birds remaining in Maharashtra, Solapur’s grasslands support the largest population—25. But residents are not keen to protect the bird, called maldhok locally, because they perceive the Great Indian Bustard sanctuary as the stumbling block to the region’s development.

The sanctuary is spread over 8,500 sq km, spanning six talukas in Solapur and Ahmednagar districts. The irrigation department of Maharashtra is digging a canal that will bring water from Ujani dam on the Bhima river to villages in the sanctuary. The digging stopped short of the sanctuary because of its protected status. This has fuelled anger among residents. “We don’t want the bird or the sanctuary. We want the canal,” say Ramachandra Bhonsle and Santosh Kabe, residents of Mardi, which along with Nannaj village is located close to maldhok’s breeding ground. The residents want the canal water because it would allow them to grow cash crops. But the canal is a threat to the bird as it avoids irrigated areas and needs arid, semi-arid grasslands to court and nest.

Keeping in view the residents’ demands and the fact that parts of the sanctuary are urbanised (part of Solapur city is inside the sanctuary), the forest department has proposed reducing the sanctuary area to 1,222 sq km (one-eighth the original size) for better management. To this end, the department moved an application in the Supreme Court two months ago. “We have completed the procedure of rationalisation. The state wildlife advisory board has approved it. We are awaiting the court’s decision before proceeding further,” says M K Rao, the conservator of forests (wildlife) for the area, stationed at Pune.

But residents do not want any sanctuary area reduced; they want it denotified. Leaders in the area have, in fact, won elections by telling people that lives of 2.5 million people are being destroyed by 25 birds. “The birds are preventing water from coming to our fields. If the canal is completed, every farmer in the area will get sufficient water to grow cash crops like sugarcane. We demand the sanctuary be denotified as there are hardly any birds here,” says Babasaheb Awatade of the Congress party. Residents of Mardi and Nannaj strongly opposed the sanctuary during a meeting with forest officials in March.

Researchers working in Solapur say the resentment towards the bird is a recent phenomenon. “Till two years ago, people willingly gave information about sightings of birds, wolves and jackals. But ever since politicians have started criticising the sanctuary, people have backed off,” says Shivkumar More, a field researcher. More and his friend Sarang Mamane have been researching for projects on black bucks, wolves and maldhoks in Solapur since 2003. They say they have witnessed a gradual decline in the Great Indian Bustard population in the past seven years. 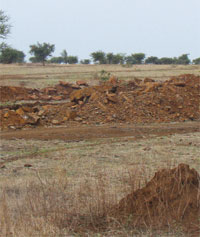 What is most worrying is that the bird has not bred at all in the past three years. A 100 hectare (1 sq km) grassland near Nannaj is the only existing breeding ground in the sanctuary. “The last chick was seen four years ago,” says Rajesh Hippargi, a wildlife expert in Solapur. He says the bustard disappeared from Karmala municipality bordering Ahmednagar district four or five years ago and never made a come back. “We know another Karmala-like situation is waiting to happen in Nannaj.”

The breeding ground is surrounded by private farms; cattle are let loose in the area to graze, threatening the bird’s survival. The forest department also harmed the grassland by planting glyricidia trees in mid-1970s under a drought programme. Bustards cannot survive in wooded areas. After conservationists took up the matter, the trees are now being removed. But the birds have not come back, says Hippargi.

The past 10 years have witnessed the greatest threat to the grassland ecosystem and the Indian bustard, he adds. The original grassland habitat in Solapur has been fragmented because of use of grasslands for agriculture and development activities. This has affected the potential of bird populations to disperse and colonise new areas.

In most bustard habitats across India, human activity is the main threat to the bird. Only an estimated 250 Great Indian Bustards survive in India. The International Union for Conservation of Nature, in its updated list of rare birds released in June, included the bird in the “critically endangered” list.

To save the breeding ground in Solapur, the forest department has proposed the acquisition of 434 hectares around Nannaj and Mardi, which is part of the rationalisation plan. The move has increased resentment among people who now fear displacement and loss of land.

“Being a part of a wildlife sanctuary, people have to undergo hardships. They are against conservation of the bird because they see no incentive in it,” says Promod Patil, who runs the Great Indian Bustard Foundation in Pune. A way to involve community in protecting the bird would be to promote eco-tourism and share its benefits with people; an arrangement could be worked out wherein people are allowed to take fodder in a regulated way, says Patil. He suggests the creation of a core breeding area near Nannaj and other areas, its strict protection and management.

Experts at the Bombay Natural History Society (BNHS), who have been studying the bird for a decade, say there is an urgent need to start Project Bustard on the lines of Project Tiger, based on scientific studies and recommendations made by it. Director of BNHS, Asad Rahmani, suggests a breeding programme for the bird. “Breeding bustards is not difficult. This has been proved in the case of the Kori Bustard (native to Africa) and the Australian Bustard,” he says. Rao says launching a special programme would help the forest department undertake effective conservation programmes for the bustard”.

At the time when the Indian government was deliberating which bird to pick as the national bird, conservationists strongly pitched for the Great Indian Bustard. The peacock won the title because of its more attractive looks and the fact that the word bustard rhymes with a swear word. Will the bustard now win the battle for survival?